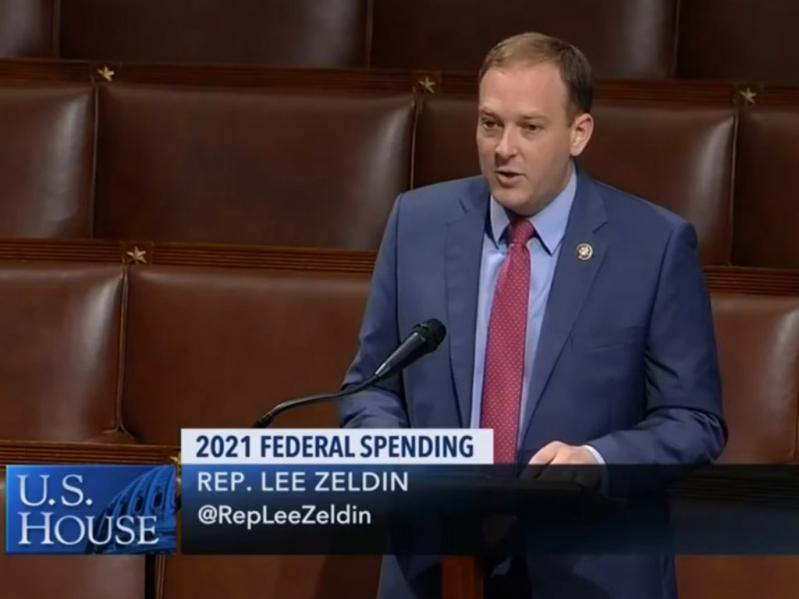 Representative Lee Zeldin decried “a slippery slope” in explaining his “no” vote on a House resolution that would see the removal of statues of Confederate soldiers and the bust of the Supreme Court justice principally known for writing the majority opinion in the 1857 Dred Scott case, which said that people of African descent were not United States citizens.

The bill, which would direct the Architect of the Capitol to replace the bust of Roger Brooke Taney with a bust of Thurgood Marshall, the first African-American Supreme Court justice, came in the wake of the murder of George Floyd by police officers in Minneapolis and of other African-Americans around the country. Mr. Floyd’s killing in May sparked months of protests against racism and police brutality.

The resolution passed by a 305-to-113 vote on July 22 and was sent to the Senate. Seventy-two Republicans and one independent joined 232 Democrats in favor. Republicans cast all of the “no” votes.

“I have never heard from a constituent that they were concerned about statues in the Capitol,” Mr. Zeldin said in an email. “I'm from New York, and don't get me wrong, I'm anti-Confederacy, but the war is over and the Union won. These are statues of Democrats. Is the Democrat Party going to change its name next? We're going down a slippery slope here.”

The National Statuary Hall Collection in the Capitol building consists of 100 statues donated by the states “to honor persons notable in their history,” according to the Architect of the Capitol, which is responsible for its operations and care.

States select the statues they send to the Capitol, Mr. Zeldin noted, and can opt to replace them. “Instead of manufacturing new issues to always divide our country in new ways every day, I wish [House Speaker] Nancy Pelosi would focus on issues important to my constituents, like keeping our communities safe, working more with Republicans on a bipartisan basis as opposed to against them, and denouncing calls to defund the police.”

The Forward, a left-leaning media organization for a Jewish-American audience, noted last month that Mr. Zeldin is one of two Jewish Republicans in the House, that both he and Representative David Kustoff of Tennessee opposed the resolution, and that both are “staunch allies of President Trump, who has opposed the removal of statues or the renaming of military bases honoring Confederate leaders.”

A group called Bend the Arc Jewish Action was among those staging a 2017 protest outside Mr. Zeldin’s Patchogue office, during which it called for him to vote to remove statues of Confederate soldiers and to censure Mr. Trump and demand he fire Stephen Miller, a senior policy adviser, calling him “a leading advocate in the White House for a white nationalist agenda.”

Mr. Trump said on Twitter that "With Universal Mail-In Voting (not Absentee Voting, which is good), 2020 will be the most INACCURATE & FRAUDULENT Election in history." Posing the statement as a question, he continued, "Delay the Election until people can properly, securely, and safely vote???"

On the same day Mr. Trump made that statement, Representative Lee Zeldin of New York's First Congressional District, a staunch ally of the president, issued a statement of his own: "Election dates are set by Congress," he said. "This year's general election will take place on Tuesday, November 3rd."

More Americans are expected to vote by mail than ever before because of the coronavirus pandemic. A general election in which most votes are cast by mail is also expected to delay the announcement of its result and invite protracted legal challenges.

The distinction the president drew between voting by mail and by absentee ballot is unclear, and Mr. Trump himself has voted by absentee ballot, as have Vice President Mike Pence and a host of cabinet officers and advisers. With polls consistently showing him trailing former Vice President Joe Biden, the Democratic Party's presumptive nominee, Mr. Trump has repeatedly referred to election fraud and suggested that he may not accept the result.

Mr. Zeldin is seeking a fourth term. Nancy Goroff, the Democratic Party’s candidate, will challenge him in the Nov. 3 election.