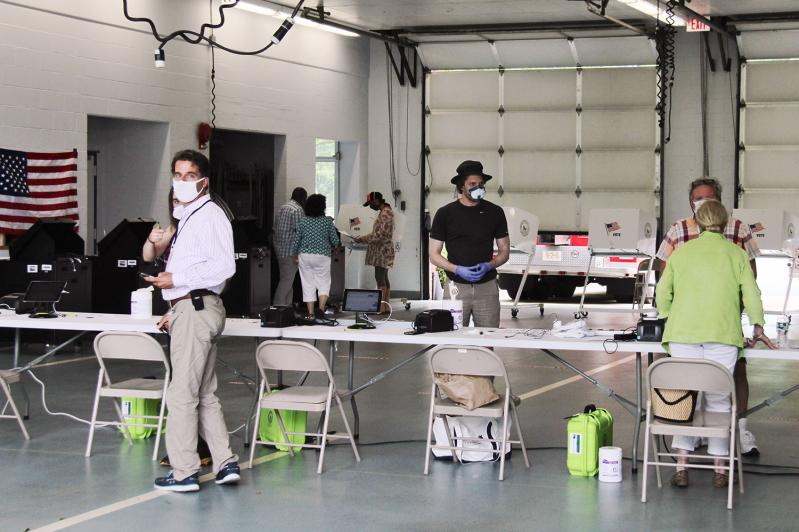 The Amagansett Firehouse was set up for polling during June's primary. An effort is underway to recruit younger poll workers for the general election in November because older workers who normally staff polling stations are more vulnerable to Covid-19.
Durell Godfrey
By Anabel Sosa

Poll workers are needed more than ever before as the threat of the pandemic looms over older populations afraid to work on Election Day because they may be at increased risk for Covid-19.

As complications with the United States Postal Service mount, and the prospect of an unreliable absentee ballot system rattles the country, community advocates are scrambling to recruit as many poll workers as possible to work on Election Day, which is Nov. 3.

"The demographics of polling workers are generally senior citizens and retirees. I think people may have been scared off by the pandemic," said Barbara McClancey, who is retired and is now the voter services committee chair of the League of Women Voters of the Hamptons, Shelter Island, and the North Folk. "It would be great if we can reach out to college-aged kids. Especially for those who are not going back to school. It's a shame we don't have more younger people involved."

At the league, which is a nonpartisan organization, Ms. McClancey is working in tandem with the Suffolk County Board of Elections to recruit poll workers in East Hampton Town.

"The elections are primarily run by citizens. It's a hard job, but totally essential," said Scott Duncombe, co-founder of the nonprofit organization Power to the Polls. "It takes about a million poll workers to run the election. Half of them are over the age of 60 — they are right in that at-risk population for Covid-19."

Mr. Duncombe and his team hope to raise the alarm about the nation's polling shortage — specifically across the 10 target "swing" states, which do not include New York. "We chose these states by places that are going to have tight elections," he said, describing "purple-y states," in reference to their blend of conservative and liberal demographics. They hope to recruit a quarter of a million workers by Election Day.

"If no one is there to work the polls, you can't vote," said Christine Sciulli, 52, an artist who has worked at polling sites in Amagansett for a decade. "It's very hard to recruit people to fill out the positions here. We have a demographic that is in danger of getting Covid. The younger people may be better, but it's tricky because sometimes the younger people aren't the most responsible."

Officials at the Suffolk County Board of Elections did not respond to requests for comment this week.

Poll workers are not volunteers. According to Work Elections, a nonpartisan project that collects poll worker information for hundreds of counties and jurisdictions, they are paid $12.50 per hour. "It's not much," Ms. Sciulli said. "But it's fascinating to meet so many people with different views."

Working on Election Day means long hours. For poll workers the day usually runs from about 5 a.m. until 9:30 p.m. Responsibilities include checking in voters, answering questions, testing voting machines, translating, and more. Workers are also required to participate in a three-day training prior to the election.

Despite being of an at-risk age, Ms. Sciulli plans to work at a polling site again this year. "It's incredible to see democracy in action. To sit there and know you are protecting democracy. It's heroic."

In Suffolk County, you have to be at least 17 years old to work the polls. In order to work on Election Day in a given county, individuals must be registered to vote in that county.

Those interested in working the polls on Nov. 3 can find information at elections.ny.gov/BecomePollworker.