Speculation about going rogue next time around 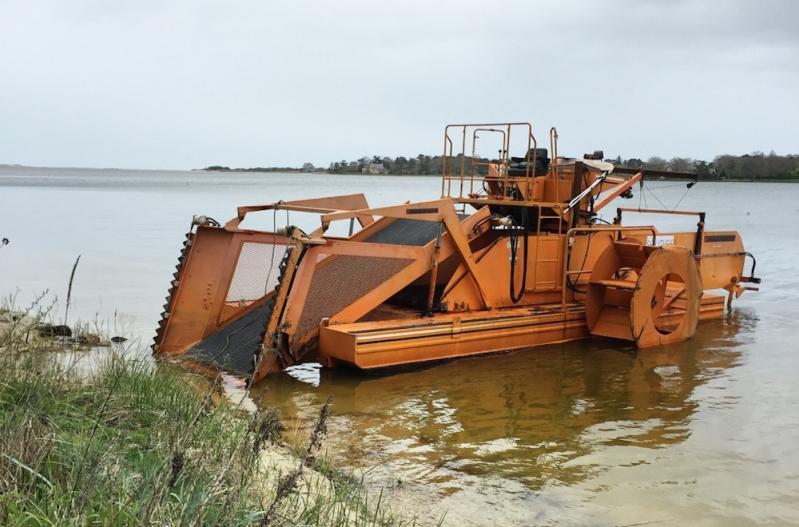 A bloom of toxic cyanobacteria, or blue-green algae, was discovered in the Georgica Cove section of Georgica Pond on Saturday. It is the first such event of the year in the pond, which has experienced varying degrees of cyanobacteria blooms every summer since 2012, but came as little surprise given the ripe conditions for such an occurrence.

On Friday, the East Hampton Town Trustees and Friends of Georgica Pond Foundation, the latter a group of pondfront property owners who formed to develop and implement initiatives to alleviate the pond’s degraded water quality, received the emergency authorization they had sought from the New York State Department of Environmental Conservation to use an aquatic weed harvester in the cove section. The authorization lasts for 30 days.

The harvester began removing plant material from the pond on Monday, weeks after sago pondweed, an aquatic plant, and Cladophora, a green alga, grew so thick it appeared that “you could walk across the cove,” Jim Grimes of the trustees said during the body’s virtual meeting on Monday. “That material has begun to break down.”

“You get this buildup of massive macrophytes and macroalgae, they start to decompose and release nutrients, and the spike seems to trigger blue-green algae later,” Sara Davison, the executive director of the foundation, said on Tuesday. “The good news is, it’s still localized, it’s only in the cove, it hasn’t been found in the main pond yet. But the problem this summer has been in the cove. We didn’t have a large macrophyte bloom in the pond.”

Georgica Pond is eutrophic, with excessive nitrogen inputs from ground and surface water runoff feeding dense plant life, the decomposition of which is blamed for choking the pond of oxygen. This summer’s blooms of macroalgae and macrophytes have resulted in hypoxia, or low levels of dissolved oxygen, at night, which promotes fish kills and harmful algal blooms. When coupled with high water temperature, the pond is particularly vulnerable to algal blooms.

Christopher Gobler of Stony Brook University’s School of Marine and Atmospheric Sciences, who has been monitoring the pond on behalf of the foundation and the trustees for several years, is working to determine whether the pond should be closed to the harvesting of marine life and recreation, Francis Bock, the trustees’ clerk, said on Tuesday.

The foundation is still awaiting a tidal wetlands permit from the D.E.C. and a natural resources permit from the town to use the harvester, “but [does not] expect them to decide for months,” Ms. Davison said in July, hence the application for emergency authorization.

Mr. Grimes described the emergency authorization as both good news and bad. “I think the sad thing here is our D.E.C. basically held this application up for an enormous amount of time. Exactly what we were trying to head off is occurring.” As the plant life decomposes, he said, “it sets up the ideal conditions for a blue-green bloom.”

Ms. Davison shared that sentiment. “Unfortunately, it’s late,” she said. “It should have been harvesting in June-July and tried to head this off.” The D.E.C.’s emergency authorization is “an interesting procedure,” she said, in that “it’s not designed to avert emergencies. It’s designed to address emergencies once they’ve happened. It strikes me as less effective than it might be.”

Mr. Grimes went further. It is “very disturbing,” he said, that “the D.E.C. is charged with our environment, and in this case they failed the environment.”

The harvester was used in the pond during the summers of 2016 to 2018, removing large quantities of macroalgae. Its use is widely believed to have had a direct benefit on the pond’s water quality. The town prohibits motorized craft on the pond, but the town board approved a resolution last year exempting the harvester, provided the foundation had D.E.C. authorization.

The trustees historically open the pond to the Atlantic Ocean biannually, in the spring and fall, which serves to flush it of toxins, increase circulation, and reduce the volume of water. The opening closes naturally, though the span in which it remains open varies. Last year it remained open to the ocean until July 25, longer than is typical, and the water quality remained high throughout the summer.

“We have to keep an eye on the permit process,” Mr. Grimes said on Monday. “If we find ourselves in this situation next year and still do not have a permit, this board has got to be prepared to take physical action on this.” 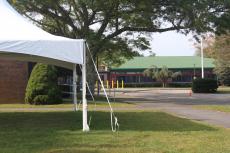