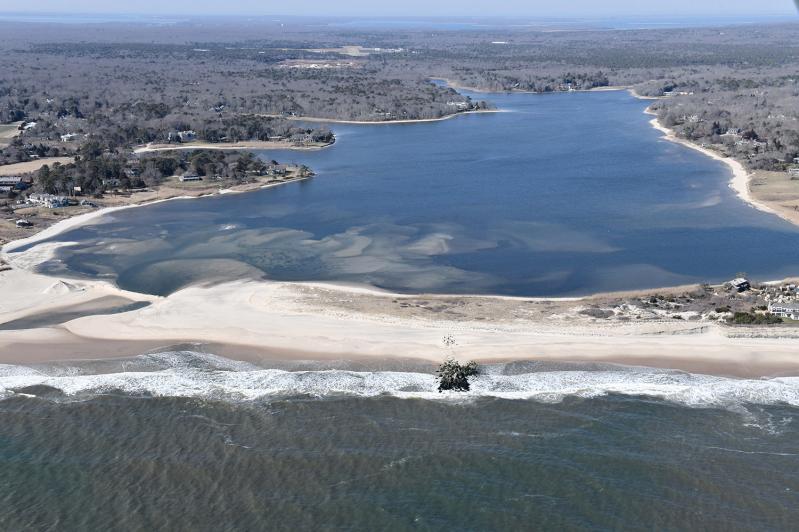 The East Hampton Town Trustees voted this week to allow a one-meter-long coring of Georgica Pond’s bottom for an analysis of its sediment.
Doug Kuntz

In its ongoing effort to remediate the degraded condition of Georgica Pond, which has experienced toxic algal blooms every summer since 2012, a group of pondfront property owners sought and received permission from the East Hampton Town Trustees to take part in a sediment chronology study.

Sara Davison, executive director of the Friends of Georgica Pond Foundation, presented a proposal at the trustees’ meeting on Monday that a mechanized vessel be used to extract a one-meter-long, four-inch-diameter core of the pond bottom in the coming summer. The proposal is a collaboration of the Gobler Lab at Stony Brook University’s School of Marine and Atmospheric Sciences and Matthew Waters of Auburn University’s department of crop, soil, and environmental sciences, whom Ms. Davison described as an expert on lake coring.

Georgica Pond is eutrophic, with excessive nitrogen inputs from ground and surface water runoff feeding dense plant life, the decomposition of which is blamed for choking the pond of oxygen, the condition known as hypoxia. To combat that decomposition, the Friends of Georgica Pond Foundation has operated an aquatic weed harvester in recent summers to remove macroalgae before its decomposition can promote blooms of cyanobacteria, the blue-green algae that have beset the pond annually. (The group recently received permission to operate the harvester again this year.)

“Paleolimnological studies that employ sediment coring,” according to the proposal, “offer an opportunity to explore and reconstruct the history of eutrophication [harmful algal blooms] and other algae in Georgica Pond and may, in turn, provide insight regarding the history of the watershed.” Paleolimnological studies are based on analyses of sediment cores and biological records.

The proposal is part of a larger project. “They’re designing an experiment for several lakes on Long Island,” Ms. Davison said, “and they would like to include Georgica Pond.”

Dr. Waters is the author of “A 4,700-Year History of Cyanobacteria Toxin Production in a Shallow Subtropical Lake,” a study in which sediment coring revealed three periods of toxin abundance, only one of which was associated with recent, European settlement in the Lake Griffin watershed in central Florida.

The hope, Ms. Davison said, is “to learn more about the commonness of blue-green algae in the environment of Georgica Pond” and how it relates to land use.

The core will be split between the labs at Stony Brook and Auburn. At the latter its strata will be aged using isotopes and analyzed for levels of organic carbon, organic nitrogen, and other geochemical parameters. “The geochronology of algal communities will be assessed via quantification of algal pigments, algal toxins, harmful algal blooms, and associated toxin synthesis genes within the core,” according to the proposal.

Trees, Wreaths for Sale in Amagansett
Holiday Cheer Is Coming to Sag Harbor
Even More Thanksgiving Options From the Pike and Old Stove
END_OF_DOCUMENT_TOKEN_TO_BE_REPLACED