Bike sharing will hurt Montauk, board is told 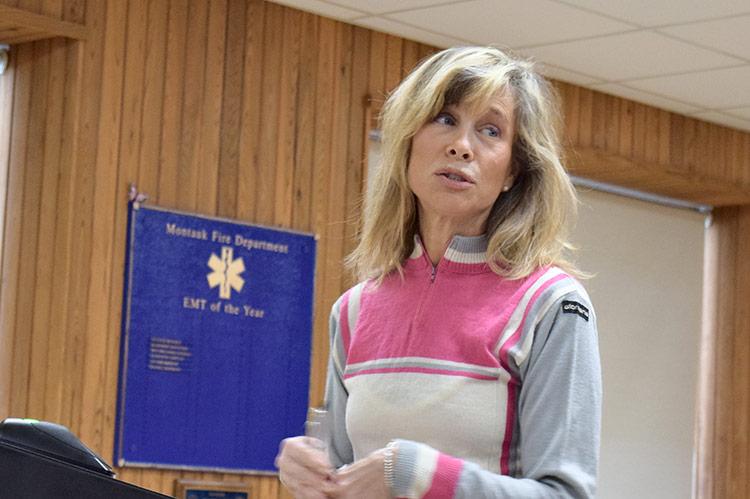 Kathleen Kirkwood was among those who told the East Hampton Town Board that a text-messaging system for bike rentals through Montauk’s bicycle shops would be better for the hamlet’s businesses than allowing PedalShare to operate there.
Christopher Walsh
By Christopher Walsh

One week after the principals of a bike-sharing company pitched the East Hampton Town Board on a trial program in Montauk this spring and summer, current and former owners of bicycle shops were among those pushing back on the idea.

PedalShare launched a bike-sharing service in Southampton Village in 2018, has since expanded to Westhampton Beach and Quogue, and plans to commence operation in East Hampton Village this year. On Feb. 4, Chris Dimon and Patrick O’Donoghue asked the board to approve PedalShare’s expansion to the easternmost hamlet.

On Tuesday, board members again expressed support for cycling as a means of reducing fossil fuel emissions and demand for parking, but this time in response to those opposed to PedalShare operating in the town. What had not been given much consideration last week, those opponents said, was its impact on local businesses.

Chris Briand opened the Montauk Cycle Company on West Lake Drive just nine months ago, after working for nine years at Chris Pfund’s Montauk Bike Shop, which closed at the end of 2018. Rentals constitute “probably more than one-third of my business,” he said, and also serve to bring people into the shop. He offers bicycle delivery and pickup, and daily, weekly, and hourly rentals.

His store is open throughout the year, and he lowered his rental rates to help the community, Mr. Briand said. PedalShare in Montauk “will hurt the community over all. . . . I don’t want to take that away from them,” he said of PedalShare’s proposed operation in Montauk. “I just want equal opportunity to succeed. It’s tough here, especially during the winter.”

The day before, Mr. Briand had posted a link to The Star’s coverage of the PedalShare principals’ Feb. 4 presentation on his store’s Facebook page. “This will hurt local business, not help it,” he wrote. “There are three places in Montauk already where you can rent bikes. I just took a big risk in opening my own bike shop this year and now without even being open nine months I have to worry about one-third of business being taken away. . . . So how will this help our town?”

Mr. Pfund, who told The Star in 2018 that he first began working on rental bikes in his father’s Main Street hardware store when he was 8, said he closed his Montauk Bike Shop, which had taken over the hardware store, “as a result of the degradation of the rental market, [which was] the main thrust of my business.” Motels, he said, “are basically giving bikes for free” to their guests. “That pretty much took me out.”

In addition to sales and rentals, repairs are an essential service locally owned bicycle shops offer, Mr. Pfund said. With the volume of cyclists already in Montauk, and a largely foreign-born work force less familiar with local traffic laws cycling to and from their jobs, a scarcity of options to repair brakes, for example, would present a safety risk. “There should be a place to have bike repair,” Mr. Pfund said. “So I don’t think it makes sense to have a bike rental here.”

Kathleen Kirkwood, an entrepreneur who lives in Montauk, suggested an alternative to an app-based bike program. Perhaps, she said, a text message-based service incorporating Montauk’s brick-and-mortar bicycle shops could provide the same service as an app-based program like PedalShare or New York City’s Citi Bike program, with the added value of delivery to the customer.

“Our concern is for our businesses here, our local people,” said Councilwoman Sylvia Overby. The presentation by PedalShare was just that, she said. “We have not signed any contract or lease. . . . Anything we can do to help you is what I think this board would like to do.”

“I’m happy to hear the discussion broadened,” said Councilman Jeff Bragman. “I don’t think we have the right to control the economy per se, but we certainly do have a right in making planning decisions to take into account preserving local shops, local character.” While it’s true that the board was “definitely enthusiastic” about PedalShare’s proposal, “I learned over the years that slower decisions are better decisions. Hearing from the community is going to help us. I’d like to hear whatever proposal you can come up with.”

Ms. Kirkwood said she could soon present “an innovative solution” integrating text messaging and local bicycle shops to the town’s business committee and to the board.

“We understand how difficult it is for local businesses renting high-priced real estate,” said Supervisor Peter Van Scoyoc. “To be year round is another whole aspect. We want to encourage year-round businesses.”

The board, he said, will “listen very carefully to what our local businesses have to say about what impacts this has directly,” so that the objective of reducing fossil-fueled transportation and increasing bicycles on the roads can be achieved without hurting those businesses. “We can reach our goal . . . as well as support and bolster local businesses. That’s where this discussion gets to be very important, and I’m glad we’re having it.”