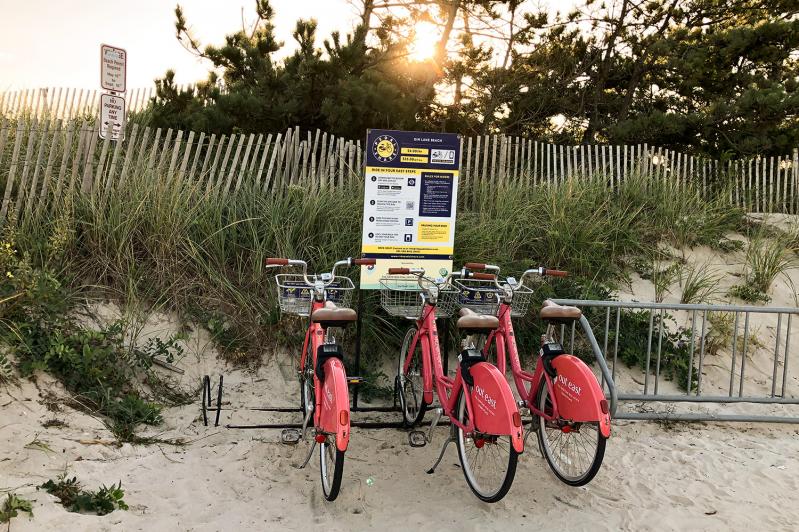 PedalShare, a bicycle-sharing company, has proposed a trial program in Montauk this summer. Last summer the company’s bikes could be seen at places like Gin Lane Beach in Southampton Village.
Jennifer Landes
By Christopher Walsh

At Tuesday’s meeting of the board, the company’s Chris Dimon said PedalShare was launched in Southampton Village with 20 bicycles and five stations in July 2018. Bicycles are rented hourly ($4), daily ($35), or via an annual membership that allows unlimited one-hour rentals, which are accessed via a smartphone app that unlocks a bike from a dedicated station.

With five stations in East Hampton Village this year — their locations are still to be determined — the program would comprise 17 stations and 60 bicycles in the villages in which PedalShare operates. Programs are typically launched with 20 bicycles and five stations within a village or hamlet.

For Montauk, Mr. Dimon proposed bike stations at the downtown green, the Long Island Rail Road station, Navy Beach, Kirk Park Beach, and the ocean beach at the end of South Edison Street, but those locations are “fluid,” he said, and subject to comment from the board.

The program has approximately 540 users. In its first full season last year, bicycles were rented more than 900 times. The season typically runs from April 15 to Nov. 15, he said, but the company is considering a May 1 launch this year.

“We’re trying to create alternative transportation solutions,” Mr. Dimon said, “a way to get people around without using vehicles.”

The company’s dedicated stations are approximately the size of a single parking space, “so we don’t have bikes everywhere. It keeps everything organized.” Stations are movable and do not require a permanent foundation or fixture.
PedalShare is open to adding more locations in the town, “but we don’t want to come in asking for a ton of things,” Mr. Dimon said. “We see it as a pilot for you, and for us, in Montauk.” Each new location the company adds is a trial of sorts, he said, though the goal is to expand throughout the East End.

Board members were amenable to the proposal, but asked to see PedalShare’s contractual arrangement with other municipalities. “I like the idea, it’s great,” said Councilman Jeff Bragman, who called the idea a creative and decentralized way to lower one’s carbon footprint. “I’d like to see more bikes.”

Councilwoman Sylvia Overby, the board’s liaison to the energy sustainability committee, said the committee has endorsed the proposal.

Implementing the program in Montauk this year would hinge on sponsorship, Mr. Dimon said. Once sponsorship and locations are secured, it typically takes four to six weeks to order bicycles and set up stations. That, he said, points to a March 15 deadline to solidify locations and sponsorship.