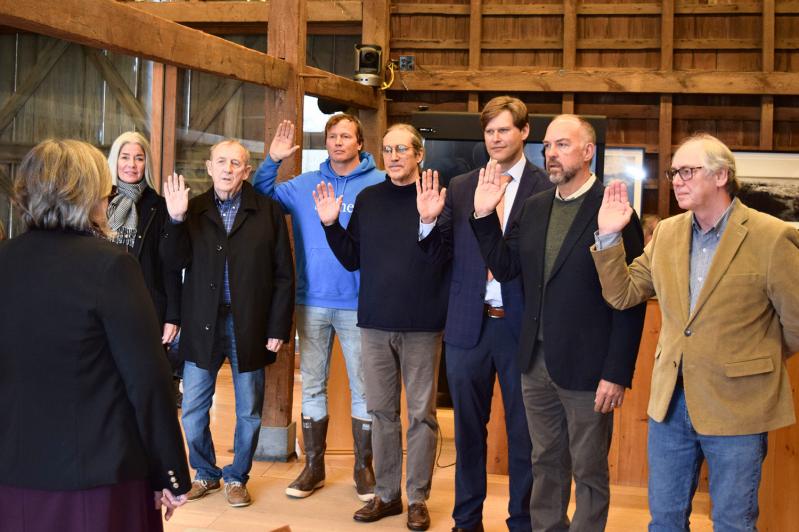 Carole Brennan, the East Hampton Town clerk, presided over a swearing in of elected officials, including seven of the nine town trustees, on Tuesday.
Christopher Walsh
By Christopher Walsh

The environment — including preservation, mitigation, and adaptation to a changing climate — was the dominant topic of East Hampton Town Supervisor Peter Van Scoyoc’s State of the Town address Tuesday at the town board’s annual organizational meeting.

Healing degraded waterways and ensuring clean drinking water, an erosion control district and beach replenishment in Montauk’s downtown, and the town’s goal to achieve all of its energy needs from renewable sources were highlights of Mr. Van Scoyoc’s remarks.

Also in the address were unequivocal assertions that the board will continue two controversial efforts: relocation of the town’s shellfish hatchery from Montauk to a residential parcel in Springs, and negotiations on terms of an easement with the developers of the proposed South Fork Wind Farm allowing its export cable to make landfall in the town. “By choosing clean, renewable energy,” the supervisor said of the latter effort, “we are moving away from fossil fuels and toward a cleaner and healthier planet for us and future generations.”

Mr. Van Scoyoc referred to the November discovery of a massive die-off of bay scallops in the Peconic Estuary, concerning which a panel of scientists last month cited unusually warm waters, hypoxia, and acidification, to highlight what he called the “necessary role our town shellfish hatchery will continue to play in maintaining and restoring shellfish populations in town waters and beyond.” The board will work with the community, he said, to develop a plan for a consolidated hatchery at the commercial dock in Springs. The proposal, which the hatchery’s director has said will reduce mortality in the shellfish that are grown and seeded in town waterways, has angered residential and commercial property owners on Gann Road, where the facility is to be situated, and on adjacent Babe’s Lane.

The supervisor noted the town’s 2019 code tweaks that are intended to encourage greater participation in septic system upgrades. The goal is to reduce nitrogen and phosphorous inputs into waterways, which are blamed for harmful algal blooms that render them unsafe for recreation or the harvesting of marine life. “You can do your part to protect our future,” he said, advising residents to contact the Natural Resources Department for information on the new incentives.

Mr. Van Scoyoc implicitly referred to the discovery of perfluorinated chemicals in private wells in Wainscott as behind an ongoing survey of wells in the commercial corridor along Springs-Fireplace Road. Land acquisition using the community preservation fund will protect the town’s sole-source aquifer, he said. “We must always remain mindful that the water we depend on is underfoot,” he said, “and what we do on land can significantly impact the quality of our water and our lives.”

Even more significant, “Sea level rise, more virulent storms, and rising global temperatures” have serious implications for the town, he said. The board will continue an effort to establish an erosion control district to finance protection of Montauk’s downtown beach, work with the federal government for a “sand-only beach replenishment project as promised under the Fire Island to Montauk Point Reformulation Study,” and “develop and implement a Coastal Assessment and Resiliency Plan, and further study and develop an adaptive plan for downtown Montauk and other areas at risk from rising seas.”

Among the “great strides” toward achieving the town’s energy needs from renewables, Mr. Van Scoyoc pointed to the Accabonac Solar Farm, which he said produces more than half the energy required to power town-owned buildings and lighting, and the 2019 awarding of a contract for the installation of solar panels and battery storage at the town’s parks and recreation building.

The board is drafting legislation to participate in community choice aggregation, or C.C.A., under which municipalities can negotiate power purchases independent of utilities such as the Long Island Power Authority. After the meeting, Mr. Van Scoyoc said the initiative would likely be on the board’s agenda in the first quarter of this year. Two public information forums were held in September, but more understanding is advisable before a board-level discussion, hearing, and vote on adoption, he said, adding that LIPA has indicated a willingness to work with the town on a C.C.A. program.

The town’s vehicle fleet is transitioning to electric and hybrid models, he said, and 12 electric vehicle charging stations in Montauk will soon join the 11 existing stations at Town Hall, East Hampton Airport, and the municipal parking lot in Amagansett. “The town’s total savings from the energy efficiency and energy generation initiatives is estimated to be over $250,000 in the next five years,” the supervisor said.

Closure of the airport is “a likely outcome” when federal grant assurances expire next year if the town is unable to gain control of it and impose restrictions on takeoffs and landings, Mr. Van Scoyoc said. The volume of traffic and noise has increased for years, he said, with the Federal Aviation Administration exerting “complete control over virtually every aspect” of the airport. The board will pursue a study of the airport’s economic contribution to the town, its users, potential alternative uses, and the impact that closing it could have.

Citing 50 new affordable-housing units under construction or recently completed, and a total of 22 acres of land acquired to develop more, Mr. Van Scoyoc said that the town has produced more units of affordable housing per capita than any other town on Long Island. Completion of a townwide emergency communications upgrade, a new senior citizens center, a wastewater district for Montauk’s downtown, and development of a community center at the former Child Development Center of the Hamptons building are still to be done, he said. “While I am happy with the progress we have made on many issues, there is clearly more to do.”

Nonetheless, “The state of the town is very good. East Hampton has led the way with visionary and innovative approaches to land use, energy sustainability, resiliency, affordable housing, and historic preservation,” said Mr. Van Scoyoc, who thanked the voters who re-elected him in November along with his colleagues Sylvia Overby and David Lys, all by wide margins.

In addition to the swearing-in of those incumbents, four of six incumbent town trustees and their three new colleagues were sworn in on Tuesday. Mike Martinsen, Ben Dollinger, and Tim Garneau, all Democrats, joined Francis Bock, Bill Taylor, Susan McGraw Keber, and John Aldred at the brief ceremony. Rick Drew and Jim Grimes, the latter now the nine-member body’s lone Republican, were re-elected in November but did not attend Tuesday’s meeting.