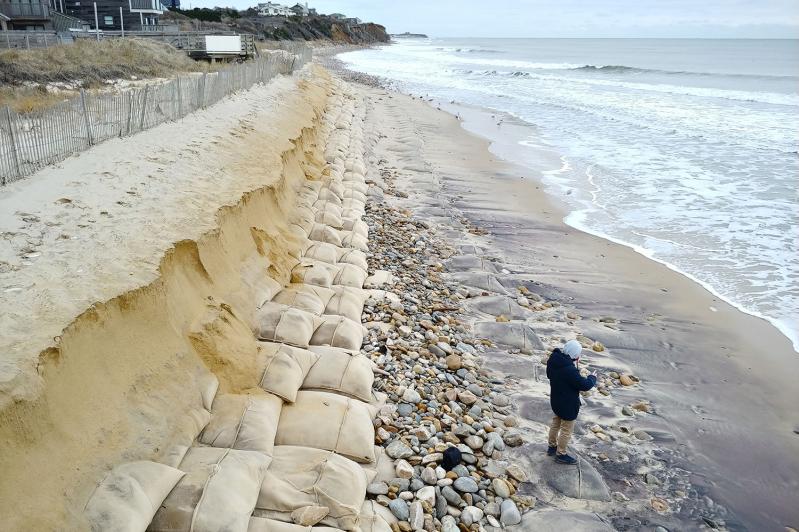 Erosion has plagued Montauk's beaches in recent days and years, which also threatens tourism as a staple of the local economy.
Eugene Alper
By Christopher Walsh

The single best thing about 2021 may prove to be that it is not 2020. The second best thing, in Montauk at least, may be the long-anticipated implementation of the Fire Island Inlet to Montauk Point project, a federal, state, and local effort designed to protect the South Shore of Long Island from flooding and erosion.

With many parts of the Town of East Hampton at moderate, high, or extreme risk of flooding, the planned October start of the project's implementation was prominent in "Montauk's Coastal Resiliency and the Future of Our Beaches," a Dec. 16 webinar hosted by Concerned Citizens of Montauk.

Authorized by Congress and the federal Army Corps of Engineers 60 years ago, the coastal project will implement a "soft solution for downtown Montauk," said Aram Terchunian of First Coastal Corporation, a Westhampton Beach coastal contracting and environmental consulting firm that is a contractor for the town. The plan consists of depositing beach-compatible sand dredged from offshore onto the beach in a configuration designed to provide protection from flooding and erosion, mimicking the natural process, Mr. Terchunian said.

In Montauk, the project is divided into four sections, or reaches. The downtown reach, critical to protecting Montauk's economic engine of tourism and the businesses that both serve and depend upon it, comprises a 6,000-foot stretch from South Eton Street to Surfside Avenue. There, the project will create a berm nine and one-half feet above sea level that will add 40 feet of width to the beach, a rough doubling of its present width, Mr. Terchunian said.

The project participation agreement among the Army Corps of Engineers, the New York State Department of Environmental Conservation, Suffolk County, and its towns and villages is to be executed as two separate contracts. The first, for the initial construction, is federally funded in full, Congress having authorized and appropriated money for the project. The second, for 30 years of project maintenance, requires the town's 15-percent share of the prorated project costs. The project participation agreement must be signed by May 2021.

Separate efforts to protect Montauk and maintain its ocean beaches were discussed during the webinar, including short and long-term projects. Superstorm Sandy in 2012 "refocused our community on the vulnerabilities of coastal living," said Supervisor Peter Van Scoyoc, and "set in motion a series of responses to deal with the issues that arose out of rather severe erosion, particularly in downtown Montauk."

These include the Army Corps's controversial 2015 installation of geotextile cubes on a stretch of the downtown ocean beach. "We have very difficult decisions to make," Mr. Van Scoyoc said. "This was bigger than what the town could deal with on its own." That stabilization effort bought the town time to complete scientific studies and plan sustainable adaptive strategies over a longer term, he said.

Also discussed was the similarly debated long-term vision of a voluntary buyout program, under which the town would purchase vulnerable properties and, with a transfer of development rights program allowing willing sellers to redevelop their business inland, effect a retreat from the shoreline.

Most of the motels and resorts on South Emerson Avenue, or "Motel Row," are more than 50 years old, Mr. Van Scoyoc said, and abandoning them and relocating would offer an opportunity to "add value in a different location immediately adjacent" while assuring long-term survival. "Again, what's the cost to the overall community and those potential owners if there's catastrophic loss?" Such a migration from the shoreline would be gradual and is envisioned as voluntary. "We need to figure out how to make that path forward so it is incentivized."

"We've developed our coastlines," the supervisor said, "and are only now beginning to see the impacts of that." He noted that the South Shore is one of the country's most at-risk areas for tax-base loss as a result of storms. "If we're going to experience more virulent storms and sea level rise" because of climate change, "think of the implications to our schools and other infrastructure by loss of tax base. We have to be thinking about that."