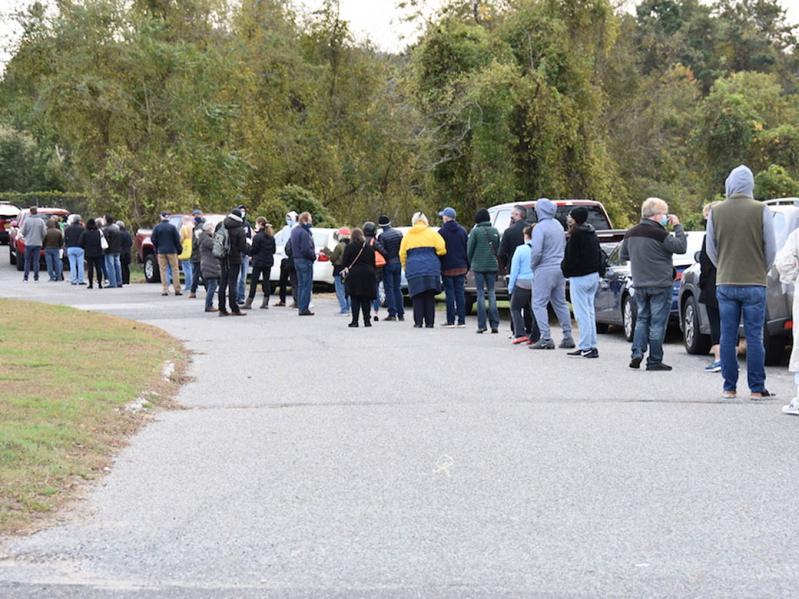 An early voting line in Southampton on Oct. 29
Jennifer Landes
By Christopher Walsh

Representative Lee Zeldin, who as a member of Congress swore to support and defend the Constitution of the United States against all enemies, foreign and domestic, and 125 of his Republican colleagues in the House of Representatives filed an amicus brief last week supporting a lawsuit that asked the Supreme Court to disenfranchise some 20 million voters in four states, all of which were won by President-elect Joseph Biden in last month's election.

The court on Friday rejected the suit brought by Attorney General Ken Paxton of Texas, also supported by 17 state attorneys general, that sought to invalidate the certified election results and throw out the presidential electors in Georgia, Wisconsin, Michigan, and Pennsylvania. Such a move would allow those states' legislators to appoint a new slate of electors for President Trump, who would overturn the electoral results in those states and thus Mr. Biden's victory.

Mr. Biden's win in those states cemented his victory over Mr. Trump, who has refused to concede the race and continues to claim massive fraud in last month's election. Mr. Trump's lawyers have lost dozens of lawsuits before and since the election, each seeking to discard ballots cast by mail or challenge votes cast for Mr. Biden.

The Electoral College met on Monday and formally elected Mr. Biden and Vice President-elect Kamala Harris, apparently bringing an end to the president's brazen efforts to overturn the election. His loyalists in Congress may, however, make another effort when the legislative branch counts electoral votes on Jan. 6.

Mr. Paxton's lawsuit alleged "unconstitutional irregularities" in the presidential election, asserting that the four states' rules by which presidential electors are appointed were "usurped at various times by governors, secretaries of state, election officials, state courts, federal courts, and private parties." The suit acknowledges the pandemic, but asserts that "Due in large part to those usurpations, the election of 2020 has been riddled with an unprecedented number of serious allegations of fraud and irregularities."

Other states that made special accommodations for the receipt of votes by mail, including North Carolina and Montana, were not targeted in Mr. Paxton's lawsuit. Mr. Trump won those states.

Mr. Paxton was indicted on felony securities fraud charges in 2015 and is apparently the subject of an F.B.I. investigation into allegations of abuse of his office. Pundits have speculated that his lawsuit is a pitch for a pardon from the outgoing president.

The Supreme Court quickly denied the complaint "for lack of standing under Article III of the Constitution." Texas, the court said in a single-page statement, "has not demonstrated a judicially cognizable interest in the manner in which another state conducts its elections."

Attorneys general in the four states targeted by Mr. Paxton denounced the lawsuit, and more than 20 other attorneys general filed a brief opposing it. The Supreme Court, Attorney General Josh Shapiro of Pennsylvania wrote on Twitter, "saw through this seditious abuse of the judicial process, and its swift denial should make anyone contemplating further attacks on our election think twice."

In another statement, he said, "These factless, baseless 'lawsuits' to stir confusion and doubt in our systems are un-American and we should not allow this circus to continue." His counterparts in the other three states issued similarly indignant statements.

But Mr. Zeldin, who has proven to be among Mr. Trump's most zealous supporters over the last four years, wholeheartedly backed Mr. Paxton's effort. In a statement provided yesterday by his communications director, he said, "The lawsuit filed by Texas to the Supreme Court presents a strong and compelling argument in favor of and defending the Constitution, law, and the legal voters of Pennsylvania, Georgia, Michigan, Wisconsin, etc. It's amazing how many people are commenting on the substantive content of this suit without even bothering to read it. Texas' suit contains many eye-popping, confirmed details of wide-spread wrongdoing, which must be understood and addressed on behalf of the legal voters who live in those states. This is so much bigger than this year's presidential race."

Mr. Zeldin said that the brief he and his colleagues filed "is focused primarily on resolving the question: What is the proper meaning and application of the Electors Clause (Art. II, Sec. 2, cl. 1), not just for this current election cycle, but for elections in the future. Election laws and state constitutions were blatantly ignored by certain officials to tilt an election in a different direction. That can't even honestly be disputed. Those decisions disenfranchised millions of voters. There are many elections still ahead for our country and what happened with the rules changes simply can't keep continuing like this."

"I thought the case the Texas attorney general brought was among the more undemocratic things I have ever observed in my life," former Representative Tim Bishop, whom Mr. Zeldin defeated in 2014, told The Star on Monday. "To ask a court to disenfranchise millions and millions of people and simply discard their votes and turn the election over to the state legislature struck me as undemocratic. We value our democracy, we revere our democracy, and to do something that so substantially undercuts it, that basically mocks it, is in my opinion beyond the pale."

Gordon Herr, chairman of the Southampton Town Democratic Committee, also condemned the congressman's move. "As far as I'm concerned, Lee Zeldin's action in this case was the action and behavior of a traitor," he said on Monday. He referred to Mr. Biden's remarks later that day in which the president-elect said the Supreme Court had "sent a clear signal to President Trump that they would be no part of an unprecedented assault on our democracy."

"Honestly, that's exactly what it was," Mr. Herr said, "and Lee Zeldin was part and parcel of that."

Speculation in Washington is that Republican elected officials are simply humoring the president, knowing that efforts to overturn the election will fail. Others may fear that crossing the vindictive Mr. Trump invites not just his fury and that of his supporters, but also a primary challenge.

Mr. Bishop did not speculate on his successor's motives but believes that he and his colleagues who supported Mr. Paxton's lawsuit fall into two categories: those who genuinely believe Mr. Trump won the election, and "what we used to call the 'Vote No, Hope Yes' caucus," members of which cast a vote with the expectation that it will fail, "and thus they'd be able to maintain ideological purity and would not have to endure the consequences."

In this case, they did so "because they knew that the case had zero, and I mean zero, merit and that the Supreme Court would dismiss it out of hand, which is precisely what they did. . . . Any person who considers themselves to be a patriotic American who would knowingly and willingly countenance the discarding of millions and millions of votes doesn't understand what a democracy is."

Mr. Zeldin, who was re-elected last month, "has always shown himself to be an opportunist more concerned about his political career than his constituents," said Cate Rogers, chairwoman of the East Hampton Democratic Committee. "But this is beyond the pale. To sign on to a baseless attempt to disenfranchise the vote in four states, and turn his back on his constitutional oath, is disgusting. As a constituent, I'm offended; as an American, I'm disgusted by this behavior."

Manny Vilar, chairman of the East Hampton Town Republican Committee, defended the lawsuit and its supporters. "There are serious questions about the election's integrity in certain states," he said on Tuesday, referring to disputed reports of irregularities in Michigan and Georgia. "The fact that politicians and certain political activists would attempt to brush off these allegations without a thorough investigation is very disconcerting."

"There's just a lot of questions," he continued. "For everybody to move forward, for Biden to be considered a legitimate president, those issues need to be resolved." He added, "We all want, whoever the next president is, for there to be no doubt that they won the election, that there is no question of election system integrity, especially since we just went through four tumultuous years of one false allegation after another, with little or no evidence, all to be disproven."

"I don't worry at all about any of these efforts succeeding," Mr. Bishop said of attempts to overturn the election result. "What I do worry about, though, is that the Biden presidency will suffer under the delusion that it is illegitimate, in the same way Donald Trump went out of his way to create the impression that the Obama presidency was illegitimate," by lying repeatedly about Barack Obama's birthplace and thus his eligibility to be president.

Representative Bill Pascrell, a Democrat from New Jersey, has called on House Speaker Nancy Pelosi to bar Mr. Zeldin and his 125 colleagues from the House on the grounds that they violated the Constitution's 14th Amendment, which states that officeholders shall not engage in "insurrection or rebellion" against the nation.