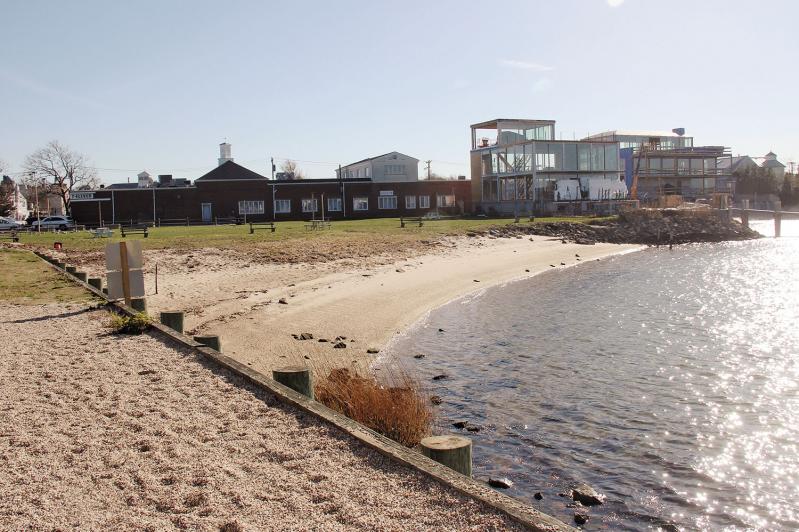 A new Sag Harbor Village zoning code will seek to protect views and access to the waterfront.
Durell Godfrey
By Jamie Bufalino

A city planner hired by Sag Harbor Village to help develop a new zoning code for the village's waterfront area described its existing zoning regulations as "troubling," "puzzling," and "not up to the task" of guiding sensible development, and offered several suggestions for improvements at a board meeting on Monday.

Chris Hawley of Chuck Banas Design, a planning firm based in Buffalo, said the existing code prohibits development that reflects the village's historical character. "Some of the most beloved buildings in Sag Harbor's village center could not be built today with the zoning regulations in place," he said. "We want to use current historic buildings as a basis for understanding how new development can relate."

He cited the code's requirement that lots have a minimum width of 50 feet, and noted that several of the village's most iconic buildings, including the Sag Harbor Cinema, which is about 23 feet wide, and the Corner Bar, which is about 25 feet wide, are well below that standard. The code also requires stores and other commercial uses to have a gross floor area of at least 800 square feet, yet some existing shops are as small as 280 square feet, he said.

The code in the waterfront area, which relies on regulating uses and dimensions, should be replaced with a form-based code that guides the shape and size of buildings, he said. The new code would introduce building design standards that protect the village's walkable character, limit the visual impact of new construction, require "human-scale" development, and allow for more physical access to the waterfront and a broader mix of building types and uses, including more water-dependent uses.

"I think it is magical that Sag Harbor still has a boatyard in the middle of its village center; that's something that should be there 100 years from now," he said.

The current code has "very few design standards for new construction," he noted. "That's a problem, especially when you want to provide more predictability for development along the water in a time when there's likely to be tremendous change." Right now there is nothing prohibiting a developer from building a blocklong condominium building that would wall off a view of and access to the waterfront, he said.

"Currently the three principal zones in the waterfront study area -- village business, office district, and waterfront -- all allow 35-foot-tall buildings," he said, and recommended either lowering the maximum height or adding a provision that requires that an upper story be set back to minimize visual impact.

He also recommended that large waterfront sites be required to provide 18-foot-wide "access yards" for every 100 feet of lot width, and suggested offering developers "a one-story height bonus" in exchange for dedicating land for public waterfront access.

Susan Mead, a member of the village's zoning board of appeals, said she was skeptical that a third-floor setback would lessen the visual impact, and wanted to make sure that any one-story bonus provided to developers would be well vetted by the village's planning or zoning boards. She also said it would be helpful to see visuals of what development might look like under the new code.

Ms. Mead, Nathiel Egosi, the owner of the Sag Harbor Inn and a building at 75 Main Street, and James Larocca, a village board member, said they were dismayed at how quickly the new code was being developed and worried about unintended consequences.

The village is seeking to have the new code in place on March 1, and has suspended the planning board's authority to grant approval of site plans, special permits, and subdivisions while the code changes are developed.

"I think the complexity and the issues at stake are such that the pace may be moving too fast for a really thoughtful examination," Mr. Larocca said. "We're not giving ourselves enough time for this change to municipal business."

A report of Mr. Hawley's analysis of the existing code and his recommendations for improving it is on the village's website.