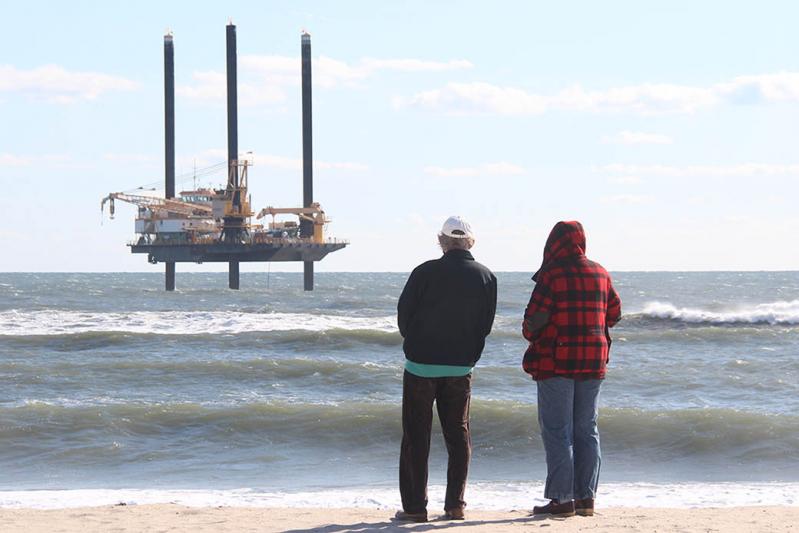 Survey work for a transmission cable for the proposed South Fork Wind farm is being conducted this week from the Loredo Brazos, a barge that arrived offshore near Beach Lane in Wainscott over the weekend.
Durell Godfrey
By Christopher Walsh

People visiting ocean beaches from East Hampton to Sagaponack on Sunday were surprised to behold the Loredo Brazos, a massive barge standing out of the water just offshore at the end of Beach Lane in Wainscott.

The barge and a second vessel are conducting survey work for a transmission cable for the proposed South Fork Wind farm, to be situated approximately 35 miles off Montauk. Geotechnical assessments requiring soil samples and measurements of the sea floor began on Monday. These, according to a spokeswoman for the wind farm's developers, will support the final design of the 15-turbine wind farm's transmission cable.

The spokeswoman told The Star on Friday that soil samples would be taken 780 feet, 1,470 feet, and 2,160 feet from shore, with each boring anticipated to take two to three days to complete.

Orsted U.S. Offshore Wind and Eversource Energy, which are jointly developing South Fork Wind and other proposed offshore installations, have identified the beach at the end of Beach Lane as their preferred site to land the wind farm's transmission cable. A group called Citizens for the Preservation of Wainscott formed in opposition to the plan and has pledged to use litigation and whatever other means necessary to block it.

Several residents of Wainscott called in to the town board's online meeting on Tuesday to inquire about the barge. Andy Casden called it "somewhat ominous in terms of what the future will bring" and said that he did not understand "why the town is permitting this to go forward without due diligence, research, appropriate investigation" before there is "no turning back."

Supervisor Peter Van Scoyoc replied that the town has in fact been engaged in the project for more than four years, and briefly detailed the developers' application to the New York State Public Service Commission for a certificate of environmental compatibility and public need under Article VII of the Public Service Law, which they filed in September. Evidentiary hearings are to begin early next month. The developers have acknowledged that federal permitting delays mean that the wind farm will not be operational before 2023, a year later than their initial expectation.

The developers plan to bring the transmission cable to land by drilling horizontally under the sea floor and beach. From a vault to be constructed under the road end, the cable would then travel underground to a Long Island Power Authority substation in East Hampton.

"I understand there's a lot of opinions, and there has been a lot of misinformation, also, about the project," Mr. Van Scoyoc said, adding that "while we certainly don't normally see barge platforms like this near shore, this is a necessary part of doing geotechnical studies" to ensure the soundness of the developers' plan to install the cable. The barge will be onsite "for a short period of time," he said. "Then it will be gone."

If the board believes there is misinformation about the project, Mr. Casden said, it should address that in the form of a letter to residents.

Michael Hansen, a vocal proponent of the wind farm, agreed with Mr. Casden that better communication would be beneficial, but noted that news of the imminent survey work was featured on The Star's website prior to the barge's arrival. That article was posted on Friday.

Carolyn Logan Gluck, chairwoman of the Wainscott Citizens Advisory Committee, said that she had been notified that the survey work was about to begin by an Orsted U.S. Offshore Wind official late on Saturday. As chairwoman of the C.A.C., she said, she "would appreciate being better informed with a little bit of time."

"I do appreciate the fact that none of us knew this was going to begin until we got notice on Saturday," Mr. Van Scoyoc responded. It would have been helpful "for all of us to know with more time to understand what we're going to see and when."

But "this is a temporary situation," he said. The barge "will be removed and ultimately the transport cable would be buried underground. There is no visual impact once installed."

Weather permitting, the vessel is anticipated to leave the area before Nov. 26, Thanksgiving Day, and move to a location off Smith Point County Park. There, it is to collect data for Sunrise Wind, a larger wind farm proposed by Orsted and Eversource.

Trees, Wreaths for Sale in Amagansett
Holiday Cheer Is Coming to Sag Harbor
Even More Thanksgiving Options From the Pike and Old Stove
END_OF_DOCUMENT_TOKEN_TO_BE_REPLACED