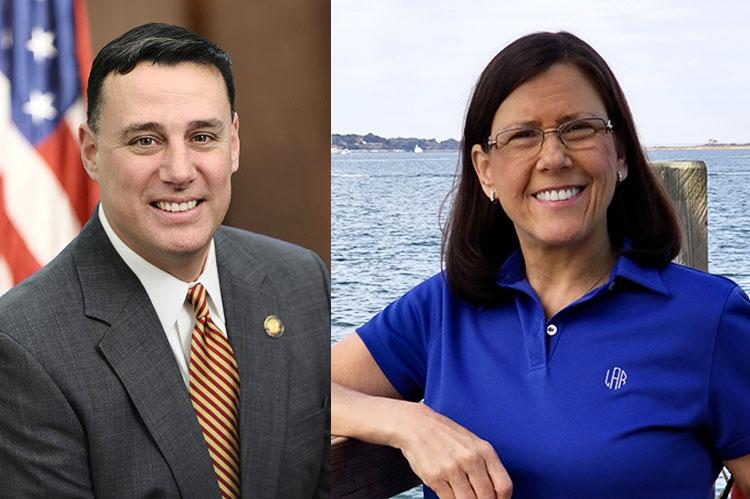 Anthony H. Palumbo, a Republican former prosecutor who has served four terms in the State Assembly, and Laura Ahearn, a Democratic lawyer, social worker, and founder of the Crime Victims Center, are vying to replace State Senator Kenneth P. LaValle, who is retiring after more than 40 years in office.
By Mark Segal

As a campaign season characterized by mudslinging and often outright mendacity draws to a close, it was unusual to see the two candidates vying to represent the New York State Senate's First District engaged in a civilized discussion of the issues. Estelle Gellman, co-president of the League of Women Voters of the Hamptons, Shelter Island, and the North Fork, was able to serve as moderator rather than referee in a Zoom event broadcast locally on SEA-TV Southampton's YouTube channel on Tuesday evening.

The candidates seeking to replace Kenneth P. LaValle, who is retiring after more than 40 years in office, are Laura Ahearn, a Democratic lawyer, social worker, and founder of the Crime Victims Center who lives in Port Jefferson, and Anthony H. Palumbo, a Republican former prosecutor from New Suffolk who has served four terms in the State Assembly.

The candidates approached from different perspectives the issue of economic recovery from effects of the pandemic. Ms. Ahearn stressed that the state and county governments desperately need federal stimulus money. "Raising taxes is not going to do it," she said, adding that budgets for school districts, health care, and public safety are at risk without a significant stimulus package.

Mr. Palumbo urged "smartly and safely opening and deregulating in New York so businesses can get back on track." He noted that Walmart and Target have been open throughout the pandemic, while small businesses are suffering. "We know how serious [the pandemic] is, and I think we all get it now," he said, and later in the debate added about "random closures" that they have "gone too far, and keeping everyone hostage is crushing our economy and businesses."

Ms. Ahearn said that while she supports the governor, "Some of the rules could have been lessened because small businesses are literally closing their doors."

Asked about Gov. Andrew M. Cuomo's police reform package, Mr. Palumbo cited his background as a prosecutor and said he felt the package went "way too far." He said bail reform as enacted is extremely dangerous and that the public should not have access to unfounded complaints against police.

Ms. Ahearn also opposed the release of unsubstantiated complaints against law enforcement and recognized that police need to be able to protect themselves. "If we're going to ban chokeholds," which she agreed are dangerous, "we also need to increase the penalty for committing an assault on a police officer." She asserted that changes in police departments across the nation are necessary but added that use of excess force by law enforcement is not such an issue locally.

On the subject of health care, Ms. Ahearn said it is a human right that needs to be addressed at the federal level. She pointed out that the New York Health Act, against which Mr. Palumbo voted, has been lingering for years and is never going to pass. She said she believes that the state should act to reduce the cost of prescription drugs.

Mr. Palumbo said rural hospitals would be put out of business if the health act ever passed. He claimed that the gap between those who have Medicaid and those who have private insurance is only 5 percent of the population and further warned that with a single-payer system everybody would lose their private health insurance and workers in the health insurance industry would lose their jobs.

Among the areas of agreement between the candidates were the need for affordable housing, the importance of addressing climate change and water preservation, and the need to reduce the deer population. Mr. Palumbo mentioned the conflict over the landing of the South Fork Wind farm cable at Beach Lane in Wainscott and added that the state should not mandate what local municipalities should do. Ms. Ahearn, on the other hand, said that when there is "Nimbyism, the state should step in so we can move forward to meet our climate goals."

On election reform, Ms. Ahearn supports all initiatives that would make voting more accessible, including no-excuse absentee ballots and early voting. Mr. Palumbo voted against early voting because of the cost, adding that "numbers have shown" that early voting makes little difference in the number of votes cast. He also voted against the acceptance of unpostmarked ballots received after Election Day, but stressed that people should have access to a ballot if they can't get to the polls.

Regarding the proliferation of deer and tick-borne diseases, Mr. Palumbo favors reducing setbacks for bow hunting, expanding the hunting season, and allowing the use of crossbows by those unable to use a compound bow. Noting the ineffectiveness of anti-tick vaccines and the damage from pesticides, Ms. Ahearn called for working with the State Department of Environmental Conservation and local communities to come up with a plan to enhance deer control but stopped short of specifics.

Both candidates support an independent redistricting commission and were united in their praise for Senator LaValle. They also agreed on the need for sufficient funding for schools and the importance of ensuring that all students have access to the internet and laptops.

Ms. Ahearn called for a private-public partnership with producers of laptops so that school districts and students have access to the technology they need. She said remote learning versus in-person learning should be determined by each district.

Mr. Palumbo objected to remote learning, stressing that social interaction is important. In order to illustrate that with respect to remote learning "one size doesn't fit all," he used the argument that children under 18 are more likely to get spinal meningitis than Covid-19.