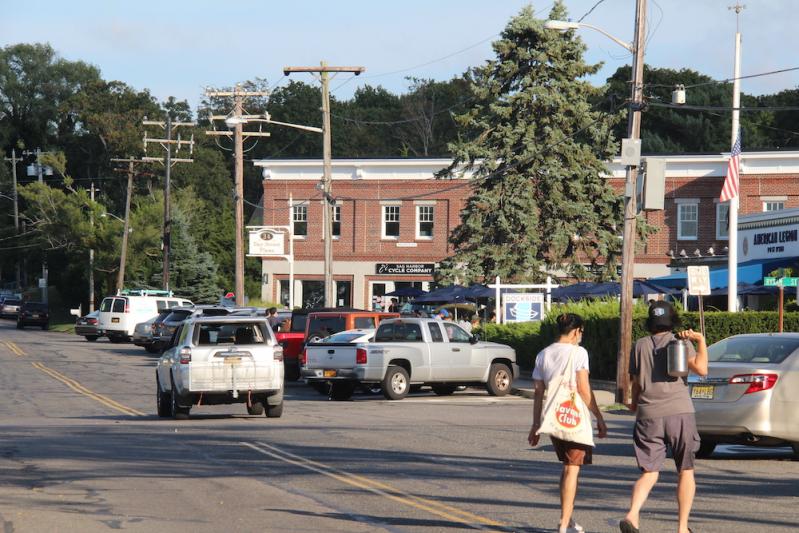 Properties along Bay Street are among those that would be affected by a temporary moratorium on waterfront development.
Durell Godfrey
By Jamie Bufalino

A proposal to impose a moratorium until March 1 on commercial redevelopment in Sag Harbor Village's waterfront areas moved one step closer to becoming a reality on Wednesday, when the village board voted in a straw poll to approve the measure once it has been approved by the Suffolk County Planning Commission.

The proposal would suspend the planning board's authority to grant approval of site plans, special permits, and subdivisions while the village undertakes a study of the areas and refines the zoning code to better manage development and protect water views. The moratorium would prevent businesses from redeveloping properties before those code changes are in place.

The village plans to work with the Nelson, Pope, and Voorhis engineering firm and the Form-Based Codes Institute, a nonprofit organization that helps municipalities develop regulations that guide the shape and size of buildings.

"The existing zoning code doesn't currently have provisions that talk about viewsheds or streetscapes or other form-related things," Marta Goldsmith, the director of the institute, said on Wednesday. The firm "will set a series of design standards for the entire area and each parcel in that area" and also help the village develop a streamlined review process for applications, she said.

The study would be completed by January, said Valerie Monastra of Nelson, Pope, and Voorhis, and then the board would vote on whether to implement the suggested code changes.

"The way the moratorium is drafted, we have until March 1, 2021, to get this work done, and during that time period the planning board will be able to continue processing applications, but applicants won't be able to get to the final stage of the review process until the moratorium is over," Denise Schoen, the village attorney, said. The proposal makes exceptions for small expansions, the structural repair of buildings, and other minor renovations, and allows developers to apply for an exemption from the moratorium.

The Suffolk County Planning Commission will discuss the proposal at a meeting on Wednesday and may recommend changes, Ms. Schoen said. Village board members can either incorporate any suggestions into the proposal, or, if they disagree with the commission, they can override the changes with a majority plus one vote, she said.