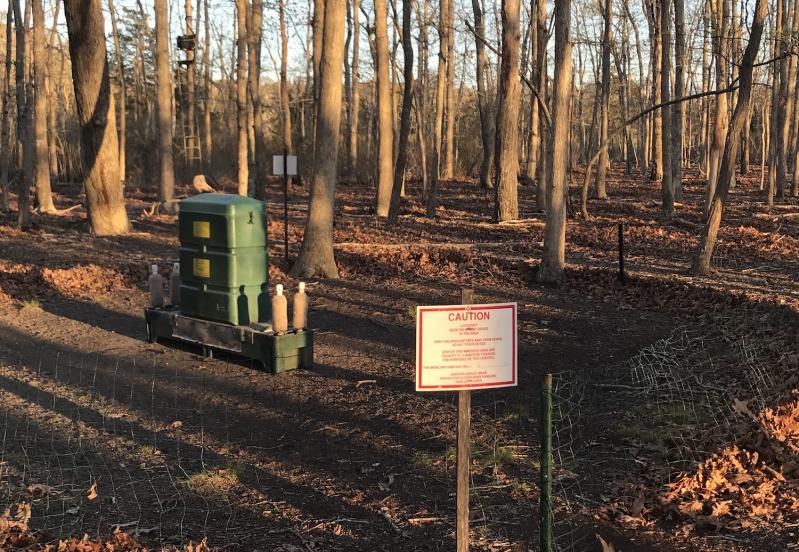 At the end of March, in an ambitious effort to eradicate ticks on North Haven, the village relaunched its campaign to install "four-poster" feeding stations for deer. With such a program, "broadcast spraying of pesticides could be eliminated," said Chris Miller, the horticulturalist in charge of deploying and maintaining the feeding stations.

The feeding stations were designed by United States Department of Agriculture scientists who, in a 2009 study, concluded that tick control "is locally possible with four-poster intervention." The four-posters bait deer with corn. While they feed, a tickicide is applied directly to their necks. Deer are an essential part of a tick's life cycle. Without them, they could not reproduce and spread in such numbers. An adult female tick will take her last meal from a deer, lay eggs producing thousands of larvae, and then die. The scientists theorized that if you target and kill that adult tick, you wipe out that next generation of ticks, and exponential numbers of future ticks.

North Haven once had 17 stations spread throughout the peninsula. However, in 2019, the State Department of Environmental Conservation began to require written consent from all properties that partially or wholly fall within 745 feet of a proposed unit. Why 745 feet? According to the D.E.C., 745 feet is the radius of a circle within a 40-acre area. Each four-poster is designed to treat 40 acres. So, if a property is within the treated area, the D.E.C. wanted the owners to agree.

The number of units deployed on North Haven plummeted to three. Shelter Island, was forced to suspend its own four-poster program. On North Haven, since the four-posters have been removed, the tick population has grown 144 percent, according to Terie Diat, a North Haven trustee who is running for mayor. She is spearheading the village's Kick Ticks Out of North Haven program. All North Haven trustees, including Chris Fiore, her opponent in the mayoral race, support the program.

Prior to the rule change, the village didn't need written consent, just an informal okay from nearby property owners. The requirement is intended to ensure that the program does not lead to problems associated with feeding deer, the D.E.C. believes. Feeding deer is otherwise illegal.

Marty Shea, the chief environmental analyst for Southampton Town, said by email that Southampton has "no plans to install four-poster treatment devices on town lands due to current restrictions on bait stations" on land purchased using the community preservation fund. Native landscaping that is deer-resistant and "open space linkages" through land acquisition could help with deer management, he said, but Southampton Town has no plan for tick abatement or deer culling.

The four-poster program has produced quantifiable results. A Cornell Cooperative study conducted on Shelter Island from 2007 to 2011 showed an 80 to 90 percent tick reduction while the feeders were in place. Those numbers are consistent with the original U.S.D.A. study. Anecdotal evidence from residents near the stations and hunters on North Haven who harvested deer close to the four-posters also pointed to a strong reduction in tick populations.

Beau Payne, a Shelter Island Town employee who ran the four-poster program on the island from 2016 said Shelter Island found that the system reduced tick populations, but that the new permitting regulations made "running a program very difficult."

"Despite sending more than 300 permission requests, we did not obtain the written approval from 100 percent of the neighbors of any of our units and the previously compliant program was shuttered by default," he said.

The Shelter Island Deer and Tick Committee produced a document on tick control strategies. Interestingly, it recommends sampling tick populations to identify the species and life-stage of ticks to develop an entomological risk index. It also advocates sharing data with the Shelter Island Medical Center. Removing deer and reactivating the four-poster program are also high on the committee's list of ways to reduce ticks.

To restart the North Haven program, Ms. Diat needs to get in touch with the 780 homeowners whose consent is required to cover the village. The board hopes to place 25 to 35 units, enough to cover the roughly 1,600-acre peninsula. An email blast went out to all residents in late March, followed by a postcard to all North Haven mailboxes. "Since we launched, we received 220 new consents for the campaign, and they're still coming in." The hard part is that, even if one person within 745 feet of a proposed feeding location opposes it, you cannot put the device in that location.

Next, along with Mr. Miller, the village will map out the consents and see how they jibe with where the planned feeding stations will be placed. "Now we will follow up with individual homeowners," said Ms. Diat. That means knocking on the doors of people who haven't consented and having conversations to try and win them over.

Back when Shelter Island first explored placing the units 15 years ago, there was some concern about the effect of the tickicide on deer meat, and if baiting would lead to an increase in the deer population or change their habits. These fears, however, proved unsubstantiated. According to the Centers for Disease Control, the federal Food and Drug Administration and the Environmental Protection Agency "affirm the safety of venison for human consumption, despite four-poster treatment." Additionally, they say the supplied food source "does not influence deer population growth."

While Mr. Gaites mentioned cost as an issue for East Hampton Town, on North Haven it is not. Ms. Diat explained that the recently passed village budget accounted for the deployment of 17 units. Mr. Miller said the cost to operate each unit, including corn, tickicide, and service to the unit was roughly $6,000 a year.

"I think there's a place for the four-posters, I just don't see it as a cure-all," said Brian Kelly, owner of East End Tick and Mosquito Control. "We need pollinators, we know that. We spray where the ticks live, low to the ground," he said. "Are there going to be some causalities? Sure." He said that the best method is an integrated approach, including landscaping techniques and personal protection. "Education is really a big part of tick-bite prevention," he said.

Mr. Miller explained that broadcast spraying is not a targeted application. The E.P.A. states that one popular chemical, permethrin, "is highly toxic to honeybees, as well as other beneficial insects."  The same holds true for "organic" methods of tick control. By killing off beneficial pollinators, the human food source is ultimately put at risk, and killing off insects also kills the main food source for birds.

"From an environmental and human health standpoint," he said, "the four-posters are a no-brainer."

"We have our own data. Data that we can track and do track," said Ms. Diat. "We believe in it. We really think it's going to make a difference on North Haven. It's a lot of work, but we're going to keep at it," she said.

A Holiday Gift for Surfers and Beach Lovers
Holiday Lights Go On at the Lighthouse Saturday
Covid Vaccine Clinic at St. Luke's
END_OF_DOCUMENT_TOKEN_TO_BE_REPLACED