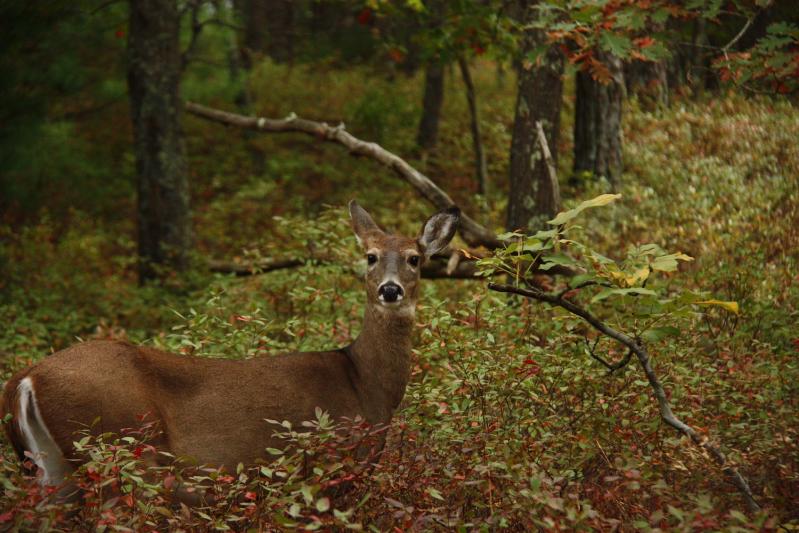 "Year-to-year changes in the forest from deer browsing are gradual and subtle, so much so that if one visits the forest on a regular basis, one might not realize what is really going on," Andrew Gaites of East Hampton Town's Department of Land Acquisition and Management wrote in a letter to the town board.
Durell Godfrey
By Tom Gogola

In an attempt to get a handle on the impacts of the region's outsize deer population, East Hampton Town established a new fenced-in deer “exclosure” in mid-October in the Grassy Hollow area of Northwest Harbor.

The exclosure is intended to help the town find ways to protect the environment from “browse” — a term for the apparent preference of hungry deer for the woody-leaf forest flora that is abundant here.

In a letter to the town board dated Oct. 14, Andrew Gaites of the East Hampton Land Acquisition and Management Department noted that “year-to-year changes in the forest from deer browsing are gradual and subtle, so much so that if one visits the forest on a regular basis, one might not realize what is really going on.”

The idea of it is pretty simple: Deer are restricted from feasting inside the fence, so that the plant life inside “can be compared to vegetation outside of it to determine the impact deer 'browse' is having,” Mr. Gaites wrote.

The town has been monitoring the eating habits of deer in this area since 2017, when it set up two unfenced vegetation monitoring plots in Grassy Hollow. Officials have been collecting data since then, and those areas will now serve as control areas for data collection alongside the new exclosure. Another data-collection plot was set up in the now-enclosed area in fall of 2019.

The organization Long Island Wildlife estimates that there are more than 20,000 whitetail deer living on Long Island. Without much in the way of natural predators to keep those numbers in check — human hunters and the very occasional coyote notwithstanding — deer are generally free to roam and forage at their leisure. The weekly police roundup of car-versus-deer accidents on local roads is another matter.

The town's Wildlife Management Advisory Committee and Nature Preserve Committee advocated for an exclosure in years past, but Mr. Gaites noted that money was finally allocated this year. The result is an 8-foot-tall fence that was erected in October in the Grassy Hollow Nature Preserve, located off Northwest Road and near the Van Scoy Homestead, at a cost of $16,000. It measures 10,000 square feet (100 feet by 100 feet) and is built with agricultural-style fencing and a walk-through gate that's closed to the public.

The installation runs along the Paumanok Path and Foster's Trail, and there's a sign explaining to the public why there's suddenly a fence in the middle of the woods.

“A more permanent sign or kiosk will be considered,” Mr. Gaites wrote.

The deer exclosure is new to East Hampton, but there are two of them already up and running at the Nature Conservancy's Mashomack Preserve on Shelter Island.

Established in 2008, those tracts demonstrate that “a strikingly different forest has developed inside the fence, both in terms of species composition and the physical structure of the forest floor and understory,” Mr. Gaites told the East Hampton Town Board.

The results can be dramatic: “Botanists found over 30 species of plants thriving inside the exclosure,” he reported, “but it was hard to find flowering and fruiting elsewhere in the preserve.”

Let's munch on some dietary facts about deer: According to the website of the National Deer Association, a group that says its mission is “ensuring the future of wild deer, wildlife habitat, and hunting,” a single deer needs to eat “between 6 and 8 percent of its body weight daily, from spring through fall, in green foliage and browse, to stay healthy.”

The organization sums it up this way: “That's a lot. Like, an insane amount.”

The National Deer Association breaks down the whitetail deer's main food sources: browse, referring to the leaves, buds, and twigs of woody to semiwoody, broad-leaved plants; “masts,” or hard or soft fruiting bodies like apples, berries, and nuts; “forbs,” defined as non-woody, broad-leaved plants, a major part of their diet in the spring and summer; and grass, too, but mostly in a pinch, the organization says.

Lastly, deer will also consume lichens or funguses, but only if they're really hungry.

Browse is the focus of East Hampton's exclosure study. The National Deer Association says the high fiber content of that food group means the deer have less ability to properly digest that food, so “when deer eat browse, they are undoubtedly consuming the youngest shoots and leaves within reach.”

That rapacious appetite for new-growth vegetation underscores Mr. Gaites's observation to the board that “East Hampton residents that frequent the town's trails and preserves are unaware of the ecological impacts our large deer population is having.”

Back in July 2011, Thomas Rawinksi of the U.S. Forest Service toured the Mashomack deer exclosures, four years after they were erected.

In his official report, Mr. Rawinski positively gushed at what he saw: “How fascinating it was to see the plant life within the exclosures!” He noted that plants inside the fence, such as maple-leaf viburnum (a member of the honeysuckle family), were “in fine fruit — after only four short years.”

Other woody plant species that had made a comeback in the Mashomack exclosures were fox grape, flowering dogwood, and big-toothed aspen, as well as less human-friendly plants such as poison ivy.

Mr. Gaites said the Land Acquisition and Management Department will use the Mashomack example as a model and “will continue to collect data at least annually to monitor changes in vegetation.”