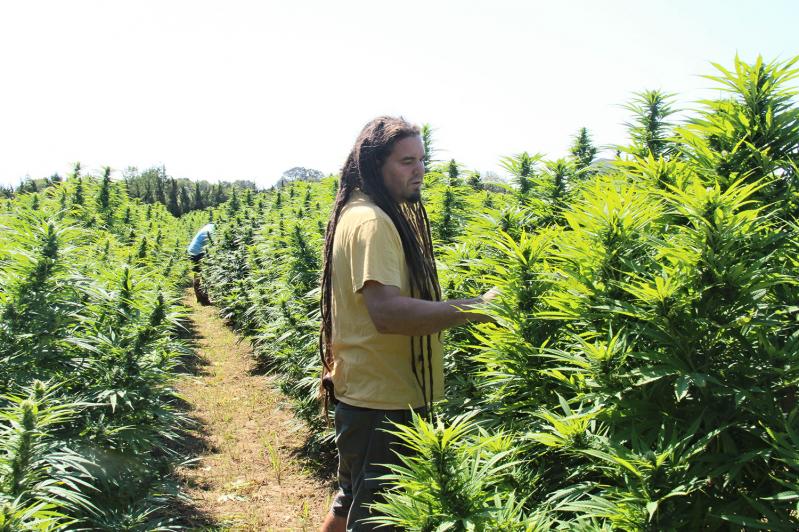 David Falkowski, one of New York State's first licensed growers of industrial hemp, is worried that changes on the state and federal levels will negatively impact the nascent hemp industry.
Durell Godfrey
By Christopher Walsh

Participants in New York State's budding hemp industry are nervous about changes in state and federal regulations that they say could have catastrophic consequences just as it is starting to thrive.

Though hemp cultivation was legalized nationally in the federal farm bill of 2018, New York initiated an industrial hemp pilot research program four years earlier, a provision of the 2014 federal farm bill. The state's program has grown from two growers and 30 acres in 2016 to more than 500 producers and 20,000 acres this year, but is set to expire on Oct. 31.

Last October, the U.S.D.A. issued an "interim final rule" governing licensing and cultivation of hemp, according to an August letter to industrial hemp growers from the state Department of Agriculture and Markets' commissioner. The department, wrote Richard Ball, "found substantial elements of the U.S.D.A.'s requirements to be very challenging and contrary to Congress's objective of stimulating the hemp industry."

The department shared its concerns with the U.S.D.A., Mr. Ball wrote, in the hopes that the interim final rule would be revised ahead of the 2021 planting season. But it remains unchanged, he said. "It is the department's view that many of the requirements concerning the scope and timing of sampling and testing, the disposal of noncompliant plants, and reporting are unrealistic and impose unreasonable burdens on growers and any state interested in administering a compliant program."

Consequently, Mr. Ball wrote, New York will not submit a state plan for the 2021 growing season. This "leaves us hemp growers to have to apply for a default federal license" from the U.S.D.A., said David Falkowski of Open Minded Organics farm in Bridgehampton, one of New York's first licensed growers of industrial hemp. With that, he said, will come "new, much more restrictive guidelines, which are out of sync with the industry."

These include requirements for testing, the time span in which crops can be harvested, and the allowable level of tetrahydrocannabinol, or THC, the psychoactive ingredient in cannabis. (Hemp and marijuana are both cannabis, but their chemical makeup and usages differ widely. Hemp is used to make things including paper, clothing, textiles, rope, and building materials.)

Under the 2018 farm bill, the federal Drug Enforcement Agency last month issued its own interim rules on hemp and cannabidiol, or CBD, which is also derived from cannabis but lacks the intoxicating effect of THC. Those rules revised definitions of THC and cannabis extracts under the federal Controlled Substances Act, with an important modification: "the definition of 'Marihuana Extract' is limited to extracts 'containing greater than 0.3 percent [THC] on a dry weight basis.' " The D.E.A. further stated that a cannabis derivative, extract, or product that exceeds that threshold is considered a schedule 1 controlled substance, even if the plant from which it was derived contained .3 percent or less THC on a dry weight basis.

Cannabis sativa L., the hemp variety grown for industrial use, has .3 percent THC or less. Anything above that threshold is "hot hemp," or marijuana, Mr. Falkowski said. But left out of the D.E.A.'s interim final rules is "work-in-progress hemp extract," or WIPHE -- hemp extract in an interim, partially processed, and concentrated state that is not intended for consumer use but is a necessary component of consumer hemp and CBD products.

The 2018 farm bill "clearly contemplates that hemp extracts will be created, and that they will be lawful," Rod Kight, a lawyer representing hemp-industry businesses, wrote on the website Cannabis Business Law last month. "Otherwise, the term 'extract' would not have been included in the definition of hemp." But separating a hemp plant's stalks, stems, and seeds from its leaves and flowers, as most hemp grown in the United States is processed, "increases the concentrations of THC despite not increasing the actual amount of THC," Mr. Kight wrote, because those parts of the plant have little of the trichome-rich parts from which THC and other cannabinoids are produced.

"According to the 2018 farm bill, if you go over that .3 percent limit, you will have to destroy your crop," said Mr. Falkowski, who also operates OMO the Apothecary, a Sag Harbor purveyor of CBD oils and tinctures. "That's a big gamble for farmers." Further, he said, labs used for compliance testing must be registered with the D.E.A. "If you test hot for something, they're going to report you," he said. "If your T.H.C. levels go over .5 percent, they can bring you up on criminal charges." The majority of hemp grown in the last few years for CBD "will test at or above that," he said.

CBD and THC exist in a ratio of between 25 and 30 to 1 as a cannabis plant grows, Mr. Falkowski said. "As the plant gets more CBD, the THC moves up with it." To comply with the .3-percent regulation for cannabinoid hemp, crops will have to be harvested early, reducing the yield by as much as half, he said. "It's out of pace with the industry. It's overly restrictive."

The D.E.A., Mr. Kight wrote, "is the primary player and policy shaper in the notorious and failed 'War on Drugs,' particularly with respect to cannabis. It has aggressively and persistently asserted itself into the hemp industry, despite the farm bill's express removal of hemp" from the Controlled Substances Act. Its interim rules represent a continuation of the agency's "pattern of unwanted and aggressive interference with a lawful industry."

The D.E.A., Mr. Falkowski agreed, "has held a very conservative, hardline interpretation of THC testing and compliance" with respect to hemp.

The state Department of Agriculture and Markets has asked the U.S.D.A. to extend the 2014 farm bill until 2021 "and to otherwise provide a more flexible regulatory structure," according to its letter to hemp growers. "We have made clear that if the federal requirements are modified to remove the challenges communicated to the U.S.D.A., the department will reconsider submitting a state plan to assume responsibility for the program."

Unless and until that happens, "it's like bringing back the war on drugs for hemp -- now, as we're commercializing it," Mr. Falkowski said. "It's not the time to bring in draconian regulations that did not exist."