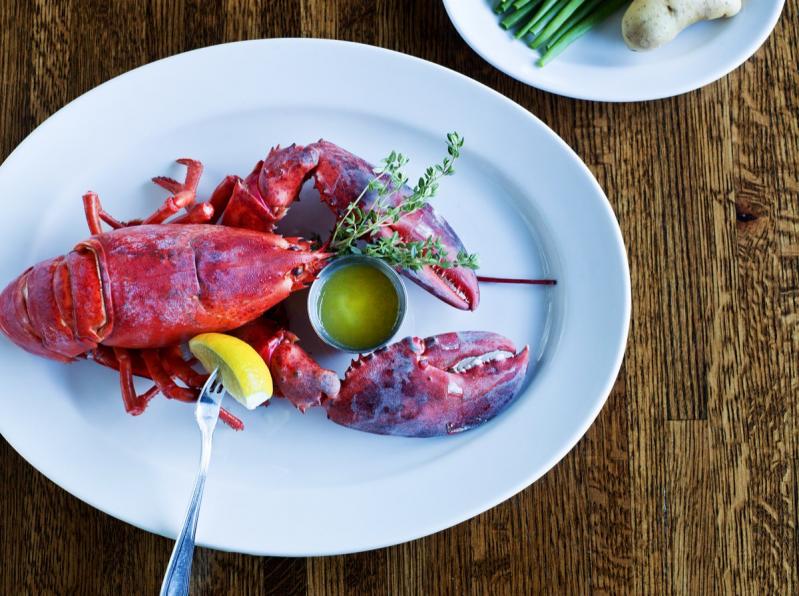 A choice of lobster three ways, including whole with butter, is one of Bell and Anchor's fall specials.
Jason Penney
By Jennifer Landes

Fall Into 1770
The 1770 House is serving a $59 prix fixe dinner menu for fall, along with the return of its tavern and takeout menus.

The prix fixe menu, which can be ordered in the dining room, the terrace, or the tavern, may include pasta with mussels, sausage, and pea sprouts; halibut with local vegetables; swordfish with cherry tomato crudo and Tuscan kale; Montauk fluke tartare, and grass-fed striploin with squash and tomato gratin and romesco sauce.

The tavern menu features the house burger and meatloaf, along with other items.

Noyac's Special Time
The Bell & Anchor restaurant in Noyac offers seasonal specials, for dine-in customers only, from Tuesday through Sunday, starting at 5:30 p.m.

Tuesday features a pork Milanese entree served with a choice of appetizer. Wednesday night is Lobster Night, with a choice of appetizer and one of three lobster-based entrees: steamed whole or a butter-poached lobster tail with petit filet, both served with haricots vests and fingerling potatoes, or a lobster gargenelli pasta dish with corn, basil, and saffron cream.

Artists, Writers, Almond
Almond Restaurant in Bridgehampton will reboot its Artists and Writers dinner series for fall beginning at 7 p.m. on Monday. The featured artist will be Sabra Moon Elliott. The cost of $49 includes the event and a three-course family style meal with a glass of wine or draft beer. Tax and tip are not included.

Reservations are essential, and can be made by calling the restaurant directly at 631-537-5665.

Manna's Autumn
Southampton's Manna at Lobster Inn has announced new fall specials as well as the return of Manna Mondays, a series of educational talks focused on aquaculture.

The restaurant's specials include a $29 three-course prix fixe served from Monday to Friday, 3 to 6 p.m. There is also a lobster-bake night on Tuesdays, offering a shrimp and crabmeat stuffed lobster with salad or crispy potatoes for $56. Kickoff Sundays feature NFL Red Zone in the bar with happy hour drink specials and half-price oysters. Happy hour continues through the week, from Monday through Thursday from 3 to 6 p.m., with $5 draft beer, $8 house wine, $8 frozen margaritas, and half-off oysters, ceviche, edamame, deviled eggs, baked clams, pretzels, burgers, falafel, and cod sandwiches. The restaurant is open for lunch and dinner, but closed Wednesdays.

Future events will feature guest speakers, presentations, chef's dinners, and the restaurant's local seafood. The aquaculture program is intended to educate the public about fisheries, production, traceability, and sourcing.

The programs begin at 6 p.m. and are free. Those attending are eligible for happy hour specials at the bar. The restaurant will be open after the talks, serving regular dinner.

Burger and Blend
The North Fork Table & Inn has introduced a "Burger and Blend" special on Thursdays from 5 p.m. to closing, featuring an Accabonac grass-fed burger with a glass of local white or red wine for $30. The pan-roasted burger comes with fries and features lemon aioli, Comte cheese, pickled turnips, dijonnaise, and a house-made bacon roll on top.