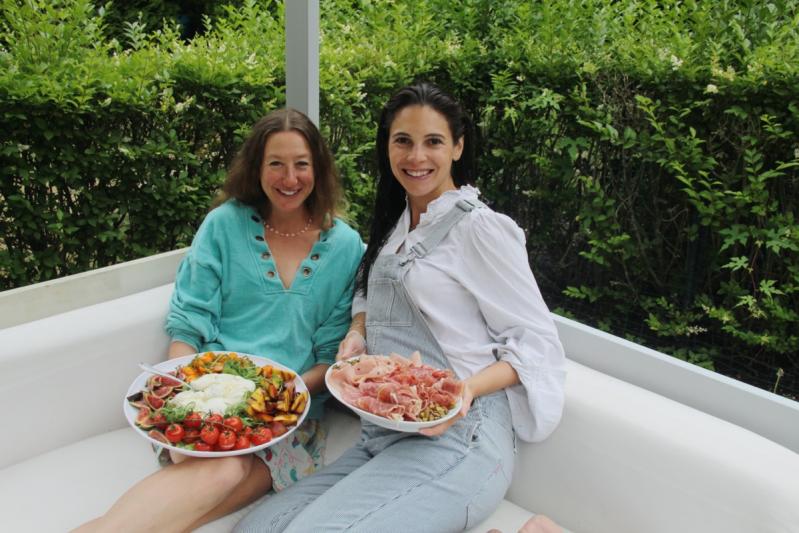 The Culinistas, Jill Donenfeld, left, and Tiana Tenet, can help facilitate all your culinary needs, from throwing a dinner party, to hiring a live-in chef, to postnatal meal services, and much more.
Durell Godfrey
By Judy D’Mello

What a pleasure it is to come across people who so obviously love what they do, whose actual career it is to make members of the public happier.

Jill Donenfeld and Tiana Tenet are the founders of the Culinistas, which operates sort of like a personal kitchen devil: at the ready, in your home, capable of rustling up anything from a fanciful dinner for 20 to weekly prepared meals for the family. But please don't use the word "catering" when describing their business, or the pair will revolt.

"So that people do not confuse the Culinistas with traditional caterers who prep offsite with day laborer prep cooks, and then send fiesta chefs to rewarm and recook everything in a hot box on site (that is why food is often overcooked at catered events)!" Ms. Donenfeld explained in an email, eager to underscore her company's personal and homespun ethos. "We prep everything on site, a la minute, specially and only for that party. We do not prep anything en mass to be sent out to 12 concurrent parties," she wrote.

Oh, and don't say the word "extravagant" either.

"The Culinistas isn't really the crew to call for extravagant, outlandish meals. We make super delicious, super fun, super special meals like a big paella in a fire pit or mastering our clients' pizza ovens. We have an incredible clam bake line up of dishes," Ms. Donenfeld said when asked to describe the most extravagant affair they've put together. "When I read extravagant, I think of props and showmanship, music performances, helicopter entrances, gimmicks!"

When meeting Ms. Donenfeld in person, at her Promised Land house overlooking the heavenly bay, even the generous spread of nibbles she laid out was lush, labored-over, and ridiculously lovely, leaving one feeling like "The setting is beautiful. The food is beautiful. Therefore, I too must be beautiful."

And therein lies the magic of the Culinistas: It's clandestine fancy. No culinary wheels have been reinvented. No gastronomic envelopes are being pushed. Their "concept" is simply, "What do you fancy eating? No, problem, I'll find a private chef to make it for you."

Ms. Donenfeld, whose foodie journey seemed inevitable, is the original Culinista. While attending Barnard College in the early 2000s, she worked in restaurants in New York City, and for Rebecca Ynocencio, the former managing editor of Gourmet magazine during the Ruth Reichl era, who went on to own a catering business. Ms. Donenfeld also wrote restaurant reviews for Time Out magazine and had a few a personal chef jobs.

But it was during her stint with Ms. Ynocencio that, "I really got to understand small-scale, in-home services through her business. I never worked for a proper catering company. I only worked for her and got to understand a more intimate way of providing a beautiful evening," she said.

So, around 2006, she founded the Culinistas as an in-home chef services provider for everything from weekly fridge stocking, to dinner parties and special occasions, to placing live-in chefs in homes.

About a decade later, she said she was running the Culinistas with no real business structure. She had dreams of growth but no roadmap to get there (although in 2017, she made the Forbes 30 under 30 list). Then, she met Ms. Tenet, who had studied business as an undergraduate at Georgetown University and went on to work at JP Morgan Chase.

"After five years at JP Morgan, I was ready to explore other opportunities," Ms. Tenet said over Zoom from her family's Amagansett house. "So, I started taking a weekend course at N.Y.U. in culinary entrepreneurship, and the moment I did that, doors opened and I was introduced to Jill. I just loved her story. I loved the boutique business that she had built over the decade and saw a real business opportunity to scale that. So, we partnered with that objective: to scale a private chef platform, a resource for chefs."

Ms. Tenet described their plan as being, "really chef-driven." They built a network of talented chefs who wanted to leave restaurant work in order to strike a healthier balance in their lives and enjoy more flexibility with their time. These chefs would provide a necessary resource for busy working families -- cash-rich, time-poor professionals, like the ones Ms. Tenet worked alongside at JP Morgan Chase. "I saw so many of my bosses, and bosses who were women, who had families, and I couldn't imagine them getting food on the table for their families. It just seemed impossible with their work schedules. So, the service that we could provide was really cool, it was just helping families gather. Of course, the food is critical to our service, but it's really the facilitation of conversation at the end of the day. And being able to gather around a really great meal and enjoy one another is the real purpose here," said Ms. Tenet, who is no culinary slouch either, having grown up in "an extremely Italian foodie family," spent a summer cooking in a Tuscan kitchen, and assisted on the set of "Giada at Home," a cooking show on the Food Network.

In the five years since the women merged and rebranded the Culinistas, the company grew aggressively and Ms. Tenet was named one of Inc. Magazine's 30 Under 30 Rising Stars. Today, they work with over 200 chefs in the New York tri-state area, Los Angeles, and Washington D.C., and continue to experiment with markets such as Aspen and Palm Beach. The Hamptons Culinistas began as a pop-up, but since the pandemic it's become more of a year-round business. Since buying her home in Amagansett, Ms. Donenfeld said, "We clearly see the growth potential of really sinking our talents into the Hamptons as a core hub."

In addition to providing live-in chefs for busy households, or one for anyone fretting about an impending dinner party -- chefs do all the shopping, prep work, cooking, and even the cleaning up -- they've also introduced postnatal meal services ("For when your in-laws come and you don't like their food," said Ms. Donenfeld). And there's the weekly fridge-stocking offering, perfect for weekenders on the East End. "We can send someone on a Thursday to prep everything and make the food so that when families arrive for the weekend, they can just get everything out of the fridge. Or, if you don't want to be burdened by making food because you'd rather be kayaking, or golfing, or playing tennis, or just hanging out at the beach," she said, seemingly speaking of those for whom money is simply an airy concept.

Suggested menus are crafted from a vast library of dishes, though she stressed that it's all about working with a client's every whim. Mediterranean-inspired dishes are always popular, but recently, international cuisine consultants have been summoned to help develop Indian and Chinese menus. This summer, the Culinistas have added Moroccan and Thai dishes to their library.

Back on the deck of Ms. Donenfeld's home, the evening sky tinged with orange, she pointed to her harvest of clams, submerged in the bay outside, alive and ready for the picking. "My dinner last night -- I just wanted something simple -- was Japanese butter rice, which is basically rice and butter, with a few clams that I steamed in sake," she said, matter-of-factly, as though we're all blessed with her innate gift of culinary intelligence.

But for that brief moment, everything seemed quite sane in the world. Which is precisely the point of hospitality.

Mashashimuet Park's History and Future
A Conference for Young People to Create Solutions
Get Outside, Get Moving
END_OF_DOCUMENT_TOKEN_TO_BE_REPLACED