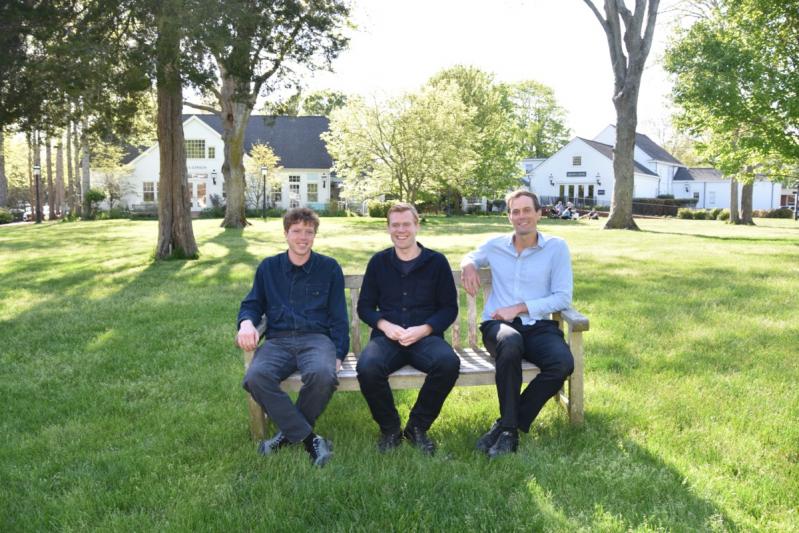 Jonas Fortezza and Evan and Daniel Bennett, from left, are partners in Doubles, a new beach and Caribbean-themed food store in Amagansett Square.
Jennifer Landes
By Jennifer Landes

When a door closes, a window opens, as the adage goes. In the case of Doubles, the Caribbean and beach-themed food store opening soon in Amagansett Square, it's a pickup window, part of the new shop and the result of a dream some 20 years in the making.

The brothers Daniel and Evan Bennett grew up on the South Fork in both Southampton and Springs and had thought about a food business in the square since they were teenagers. Now in their 30s, they own two successful restaurants in Greenwich Village: Mimi, which opened in 2015, and the nearby Babs, which opened in 2019.

The loss of Hampton Chutney (which moved to East Hampton after two decades in the square) was still fresh in the minds of many when Daniel met with Max Lerner to walk the property and discuss possible concepts for a prepared food store. Almost simultaneously, they brought up roti, as a centerpiece for the menu.

Roti has its primary origins in India, but is also a Caribbean culinary tradition, brought over by workers in the 19th century. As Evan described it, it is similar to a tortilla, unleavened and made out of flour, water, and salt. "It's rolled out and then cooked on a tawa, which is a flat hot pan. Then you fill it with curried vegetables or curried meats. It would be most similar to how you would eat a burrito." It turns out it is a favorite concoction of the brothers and Mr. Lerner.

The "doubles" referred to in the name of the shop are "a small kind of leavened bread called a fry bake. Then they're filled with chana, a curried chickpea mix, with different sweet and tangy sauces that go on it." The idea was to "make an amalgamation of these two elements that we thought fit really well together," said Evan.

Mr. Lerner, whose family owns the property, said they wanted a tenant who would offer a unique culinary contribution to the community. "We were really adamant about making sure it was something that wasn't all over the place."

Roti "was really the thing that jump-started the conversation," he recalled. It was evidence of a similar mindset. "We're both from here. We both understand the local dynamics, the community value of the space, and what we would ideally like in that location."

Joining the Bennetts as partner on this venture is Jonas Lafortezza, who is 26 and has been working in their restaurants for the past few years. He grew up spending summers nearby on Meeting House Lane and shares their deep appreciation for the region's produce, fish, and meats. The partners, along with Mr. Lerner, met up in the square on a bright and breezy May day to discuss the new business.

In addition to the Caribbean specialties, they plan to serve their takes on other classic beach food: hot sandwiches of either grilled fish or fried chicken with special sauces for each, salad options, curried pumpkin, slow cooked vegetable and grain bowls, five varieties of smoothies, and rotating flavors of soft-serve ice cream based on what is in season locally at places like Balsam Farms. The mahi-mahi for their sandwiches will come daily from Montauk. More items, currently in development, will be rolled out after the opening.

"It's fun to cook out here as opposed to cooking in the city," Evan noted. "I use a lot less ingredients because you don't want to mess with them at all, because it's all so good. Whereas you don't always find that in the city. People are good at bringing stuff in, but it's not the same as just getting it the same day from the farm stand."

The entrance remains, but there is now an exit at the rear of the building next to the pickup window. This will allow people to order on the website or through an app and then pick up the food without having to walk into the square or the building if they are on their way to or from the beach. There will be tables outside, a counter to order food inside the store, and a small market area with packaged snacks and other items.

They acknowledged that their theme fits a space many residents associate with Hampton Chutney. According to Evan, "You want to create a familiarity with people, and people knew that space in the past for having a certain style of food." The fact they had the idea for years made the space's availability "seem serendipitous," added Daniel. "It's coming together naturally."

None of the group is classically trained. They have learned from the chefs they worked with and hired -- one who had worked at 30 restaurants with three-star Michelin ratings in two-week stints -- and by doing every job at the restaurants they worked in before they opened their own. An early job for Evan was sourcing the best local produce for a private chef. He then had his own catering and private chef gigs. When he attended New York University, he could work in the city's restaurants. "My major was cultural communications, but it was really bartending and serving."

In the summers Jonas spent at his grandmother's Amagansett house, he learned to appreciate the fresh ingredients his uncle brought home from the markets and cooked. "I started working in restaurants in New York as a result of my experience with the produce in the Hamptons." At 15, he began as a dishwasher in a Bond Group hotel restaurant, worked his way up to line cook, and kept going.

The Bennetts always had gardens in their yards and the boys (who went to Hampton Day School and the Ross School before college) participated in the planting and harvesting of the family's vegetables. The Ross School's kitchen and gardens were also an early influence. They credit their success to investing the time, resources, and travel necessary to develop good palates and making the effort to really understand the cuisines they serve at their restaurants. "You get that by experience. You get that by going into those places, doing the research and getting your hands in the dirt," said Daniel.

When they were first starting out, they took the remainder of their paychecks after rent and spent $600 on tasting menus to understand why people thought they were worth it. "I didn't buy clothes or things like that," said Daniel. "We wanted to know what was so special about these menus and how they were different from what we were doing." Jonas concurred, "I was the guy at the omakase restaurant in a dirty T-shirt. That's what I cared about."

Evan and Jonas had recently returned from Barbados after "cooking with a woman who had been making roti her entire life," Evan said. "She was so gracious and happy that we were so interested in learning her craft. Working in her kitchen was really beneficial to us."

Mimi, a nine-table French restaurant, was received with favorable reviews and inclusion on best restaurant of the year lists. Babs, with 60 to 70 seats including an outdoor area, opened with a more eclectic menu. It built on the success of Mimi and received two and a half stars from The New York Times in October of 2019. Due to Covid, however, they found themselves closing and opening the restaurant four times in two years.

"Both of them are still open and working right now," Evan said. "That's a blessing. So, we made it through that." After the executive chef, who worked in both restaurants, moved upstate during Covid, Evan and Jonas took over the kitchens. But Jonas will focus on Doubles once it opens. They will also have a director of operations here and each brother will alternate weeks between here and the city.

Although there have been some delays with supply chain issues and the like, Doubles will be open by July 4th weekend. "Every day is a new day and we're working it out," said Daniel. No matter what, they plan to have at least the pickup window functioning by then. The store will be open daily, from 9:30 a.m. to 8 p.m.