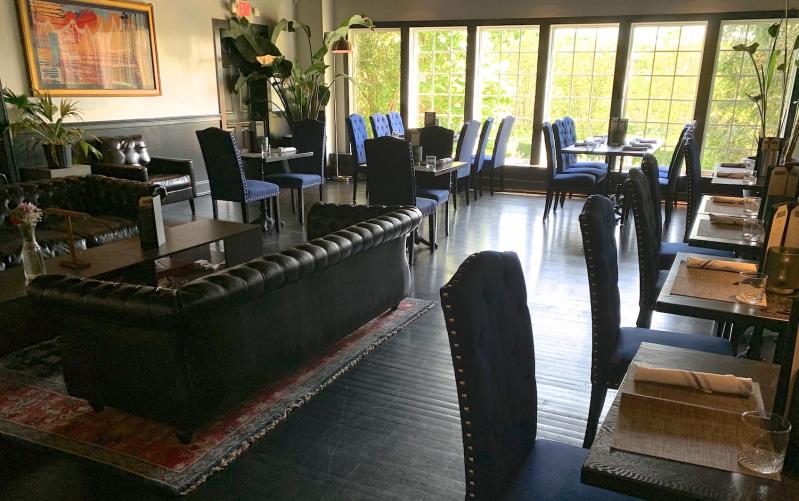 The dining room, handsome and darkly lit, is upholstered in striking sea-blue material with silver studs, and is unusually comfortable.
Durell Godfrey
By Kurt Wenzel

Walking into the new Main Prospect restaurant in Southampton, you might get the feeling you're entering the home of your very fun, and very rich, male friend. You come in to the large baronial country house and encounter a masculine-style interior with a long bar, plenty of couches, and a surprisingly large arcade room that includes shuffle board, and a personal favorite, Galaga. The arcade is about the only thing left over from the immortal John Ducks, the restaurant that reigned for four decades at the location.

The dining room, handsome and darkly lit, is upholstered in striking sea-blue material with silver studs, and is unusually comfortable. No jamming in here -- the chairs are wide and the banquettes plush. A jazz duet played live on the night we were there, all of which adds to an atmosphere that is slightly more sophisticated than your average restaurant. And while the bar can grow boisterous, the dining room remains a fortress of solitude.

Main Prospect's menu approach will be familiar, maybe too familiar, to East End diners: salmon, steak, pasta, cod, and chicken, of course; though, we were told, there will be specials available in the summer. The chef, John Trzcinski, tries to put a little twist on each dish, and he is not without a sense of humor (desserts, for example, are called "Happy Endings").

A Caesar salad is traditional but includes Parmesan bread pudding, which turns out to be soft-styled croutons. Our shrimp cocktail ceviche seemed to be lacking a citrus component but included tiny, caper-sized, pickled onions, which was genuinely unique and worked well against the diced fish.

A calamari fritto misto included shishito peppers and zucchini. A spicy aioli was drizzled on top, with a red pepper romesco sauce on the side. The fish and vegetables had an ultra-flaky coating, however, that was so delicate it didn't adhere very well, and by the time you grabbed it or speared it with a fork it mostly fell off and ended as crumbs on the bottom of your plate.

The grilled meat selection, which featured a 14-ounce strip steak and a 10-ounce filet mignon, is excellent. We had the filet, ordered medium but arriving more on the rare side. Still it was wonderfully tender with a nice flavor from the grill, and served with a small dollop of demi-glace sauce. Beware that the included chive potato puree is really just a "schmear" of potato, and the crispy fried onions little more than a garnish.

So, too, it was with a delicious pan-roasted cod. It had a very mild pesto crust and was topped with a very good tomato tarragon beurre blanc. It was perfectly cooked, but the portion seemed a little small. And this time there was no accompaniment at all. By the end of our entrees we found ourselves asking for bread, which we were told is a $5 upcharge -- an eye-roller, which the restaurant may want to rethink. It may want to have its servers (who are excellent) encourage diners to order side dishes.

Strangely, the heartiest of the three entrees was the vegetarian option, a stuffed zucchini. It is first grilled and then filled with charred radicchio, cured tomato, and grilled artichokes, then topped with grated locatelli and a nice marinara sauce. As we all know, veg options can be a snooze, but this one was a fully developed and satisfying dish.

For dessert we had a pot of dirt. Well, actually something called the Dirtpot, which is literally a small planter filled with chocolate pudding, salted caramel pudding, whipped cream, gummy earthworms, and crushed Oreos sprinkled on top for that sifted soil look. It was genuinely funny, and also very decadent. Next time we'll try Grandma G's zeppoles, which sounded great and also would be included in an option called the Finisher, which includes a taste of all the desserts.

There's a full bar with a nice array of house-made cocktails and wines by the glass. The Intercept pinot noir, a full bodied style pinot, is a steal at $12 a glass.

Word of mouth about brunch, served Saturday and Sunday afternoons, is all raves.

There is outdoor dining, though the rows of picnic benches seem pedestrian compared to the elegant dining room; this may one of the few restaurants this summer where you might prefer to be indoors. I doubt this will matter much either way come summertime. Main Prospect, a sophisticated newcomer that doesn't take itself too seriously, seems bound for success.