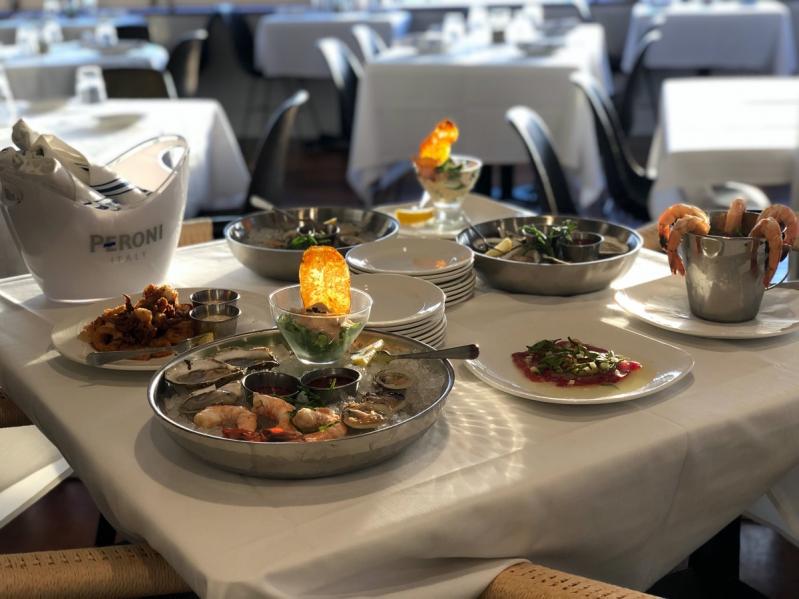 Bostwick's on the Harbor will have a new but familiar face in the kitchen this year.
By Jennifer Landes

Bostwick's Hearts Bistro
Those who are fans of sunsets and miss Harbor Bistro will be heartened to hear that the restaurant's Damien O'Donnell is in the kitchen this summer as a chef and partner at Bostwick's on the Harbor in Springs, which is now open for the season.

Mr. O'Donnell was the chef and owner of Harbor Bistro until it lost its lease last year. Chris Eggert and Kevin Boles, the owners of Bostwick's, said they were thrilled to add him to their kitchen this year.

Hours are Thursday through Sunday from 5 to 10 p.m. Wednesdays will be added to the schedule after Memorial Day. After school lets out, Bostwick's on the Harbor will be open seven days. Reservations are not accepted.

New Kid on the End
Roberta's, co-founded by Brandon Hoy and Carlo Mirarchi, will make the drive east from Brooklyn this season to open an outpost in Montauk near the train station on the site of the former Arbor restaurant. Montauk is the latest stop for a mini-empire that spans Los Angeles, Singapore, and Nashville in addition to eateries in Bushwick and Williamsburg.

Aiming for a Memorial Day Weekend opening, the 160-seat restaurant with outdoor patio will serve a signature clam pizza along with several others, bread baked in the wood oven, house-made straciatella cheese, and pastas with local fish and shellfish. Bay leaf panna cotta and root beer soft serve ice cream are dessert options. The two bars will feature natural wines, specialty cocktails, and a thoughtful craft beer selection on tap.

The owners of the new restaurant say they plan to keep it open most of the year.

Lovely Rita
Rita Cantina at Maidstone Park in Springs has opened for spring with a new summer menu and an Oaxacan lobster bake now in rotation. Its hours are Wednesday through Sunday, from 4 until 10 p.m. on weeknights and later on weekends.

Duryea's MTK
Duryea's will open its Montauk site Thursday and its Orient Point location next week serving seafood focused meals with views of the bay.

Duryea's Montauk has a large waterfront deck and a sunset view. It serves casual seafood classics such as grilled or steamed lobster, lobster roll, lobster cobb salad, and locally caught fish. It also has a more creative side with dishes such as whole grilled octopus with olives and green romesco and mussels mariniere.

The raw bar has local shellfish such as Montauk Pearl oysters, Lazy Point oysters, little neck clams, and chilled lobster along with Alaskan king crab and snow crab claw. Platters serve from one to four people with a dramatic presentation. Many dishes are intended for family-style dining and there is a children's menu of cheeseburgers, grilled cheese sandwiches, and chicken fingers and fries.

The restaurant, which does not accept reservations, serves wine and beer and all items are ordered and paid for at the window and then brought to the table. Spring hours for the restaurant are Sunday through Thursday from noon to 10 p.m. and 11 a.m. to 10 p.m. on weekends. It is closed on Tuesdays. From Memorial Day weekend on, the restaurant will be open all week.

A market offers products from artisans, coffee, and breakfast items and is open from 8 a.m. to 8 p.m. on the days the restaurant is open. Duryea's Boutique has summer beach basics, hostess gifts, and Duryea's branded merchandise.

Duryea's Boutique will be open 10 a.m. to 8 p.m. on the same days as the restaurant.

Brews News
The Springs Brewery has a new beer, the Treiber Pilsner, named for Treiber Farms, and the North Fork farmer who harvested the beer's barley by hand, Peter Treiber Jr. With a 4.8 percent alcohol volume, the "crisp and crackers-clean" lager celebrates warmer days.

Gunnar Burke and Lindsay Reichart are selling their brews and featuring their new releases at the Springs Farmers market on Saturdays from 9 a.m. to 1 p.m. A four pack is $16. They are also available in limited quantities in local beverage stores. Their website now has a location map of where Springs Brewery beers should be available.

Other developments include a new pale ale that will be released soon and a return of the first beer they made commercially.

Farmer Fridays
Starting Friday, the East Hampton Farmers Market will begin selling in Herrick Park on Fridays. It will return to Sunday sale days in the fall. Friday selling hours are 9 a.m. to 1 p.m.

Free Car Seat Checks in Southampton
Battle of the Books, and More Fun for Teens
This Week's Happenings in Montauk
END_OF_DOCUMENT_TOKEN_TO_BE_REPLACED