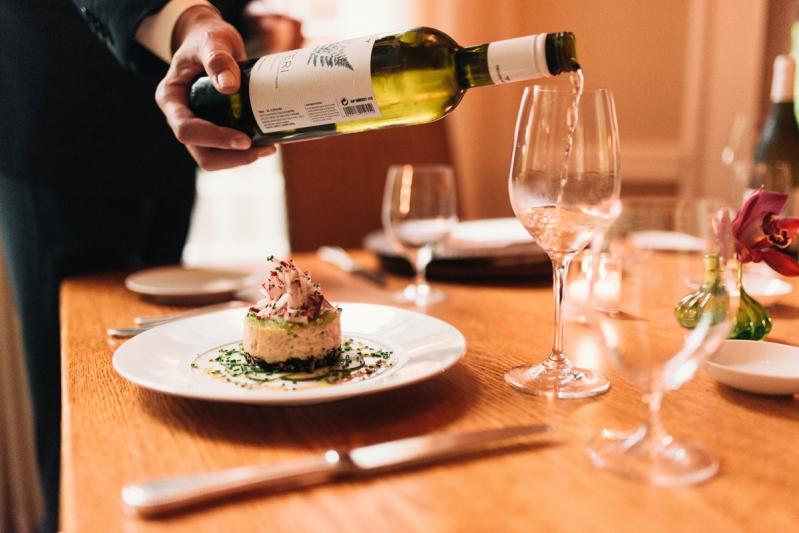 The 1770 House in East Hampton will have special menus for wine and dinner for Valentine's Day along with special room rates.
David Benthel
By Jennifer Landes

1770 Is for Lovers
The 1770 House will celebrate Valentine's Day with a special menu and special rates on its accommodations next week.

The restaurant and tavern are featuring a $95 prix fixe menu designed by its chef, Michael Rozzi. An a la carte menu will be offered for takeout.

The wine menu will offer champagne and sparkling wine selections from France, Spain, New Mexico, and California. Two selections will be available by the glass for $16 to $20. Four half bottles will be served priced from $30 to $225 and nine full bottles from $56 to $450.

For those who want to prolong the celebration, the inn's winter prices on its guest rooms and carriage house will be discounted an additional 15 percent from Sunday through Thursday.

The menus are posted on the 1770 website where reservations can be made for the restaurant and inn.

Valentine's Day in Sag
Some Sag Harbor restaurants have added or announced Valentine's Day menus this week including K Pasa in Sag Harbor, which now has a $45 prix fixe special with appetizers such as hamachi crudo, duck carnitas, and corn and queso risotto. Entree choices are chocolate mole short rib, blackened salmon, or jackfruit carnitas with a red velvet tres leches cake for dessert.

Sen has a $75 prix fixe menu it will serve all weekend with rose wine pairings. It starts with edamame, continues with a choice of tempura oysters or Japanese corn potage soup, then a shared sweetheart roll. Entree choices are miso cod or braised Iberico pork belly, both served with whipped Japanese sweet potatoes and broccoli rabe. A matcha cannoli with chocolate covered raspberry mochi serves as the finale. The meal includes food and beverage, with tax and tip extra.

MTK Lobster House, which is reopening after a winter break, will also offer its $45 Valentine's Day menu all weekend. There are choices of appetizer such as lobster bisque, oysters Rockefeller, and shrimp and pork dumplings. Entree selections are chicken Milanese, shrimp linguine, pan-roasted cod, or a cold or warm lobster roll with French fries. A glass of wine or a warm chocolate cake with vanilla ice cream is also included. Reservations are recommended and can be made by calling 631-808-3639.

Amour at Pierre's
As of this writing, Pierre's in Bridgehampton, which was undergoing some renovations over the past few weeks, expects to be open this weekend and for Valentine's Day.

The restaurant has a set Valentine's Day menu for $95 featuring several gluten-free options. Appetizers such as Peconic Bay oysters, lobster risotto, and Alaskan king crab start off the meal. Entree choices include lobster fricassee, pan-seared salmon, roasted monkfish, a milk-fed veal chop, rack of lamb, and filet au poivre. There is a duo of lemon and chocolate mousseline for dessert. Reservations can be made through the restaurant's website.

At Loaves and Fishes
Loaves and Fishes in Sagaponack is back from winter break with offerings such as salmon and spinach fish cakes, Parmesan-crusted chicken schnitzel, and a warming beef bourguignon. Those who don't mind the cold can try the store's featured ice cream flavor of the month: milk chocolate sea salt caramel. Menu updates are posted on the store's website.