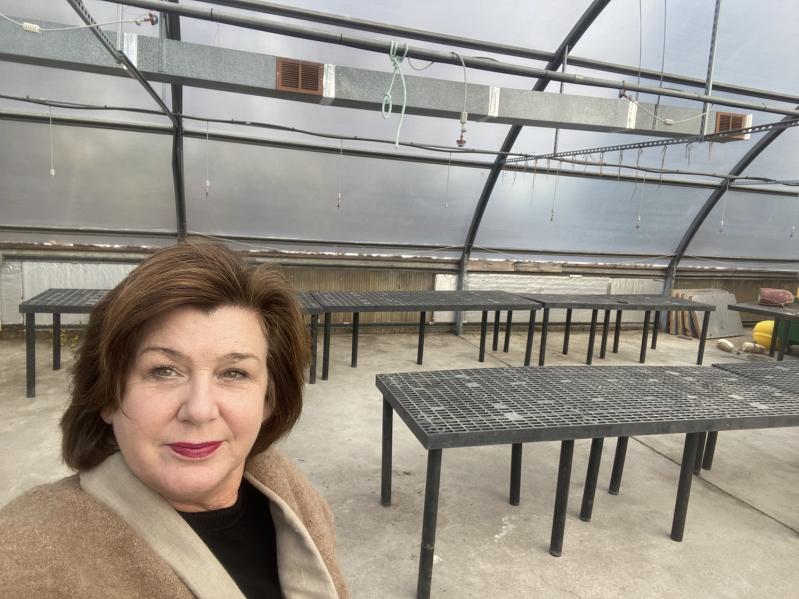 By February, Judiann Carmack-Fayyaz hopes this greenhouse will be full of students taking a horticulture workshop.
Courtesy of Judiann Carmack Fayyaz
By Christopher Gangemi

Winter approaches, but there's a feeling of spring in the air at the FoodLab at the Stony Brook Southampton campus.

"There's so much happening here. A big buzz about farming," said Ms. Carmack-Fayyaz, who, until this summer, taught about the intersection of agriculture and technology at Bridgehampton High School. She is looking to regenerate the FoodLab, slowed by the Covid pandemic and funding issues.

The mission of the FoodLab is to study the food-related issues facing the world, especially how to feed a population that just surpassed eight billion. Climate change and diminishing natural resources will add to the challenge, and preparing the future work force is a goal.

"We want to be the place to train the next generation of local farmers and food producers," said Ms. Carmack-Fayyaz.

"We've gotten some more funds to help develop an education wing, which has always been part of the long-term plan," he said. "Three large donors gave $750,000 to be spread over the next three years to see what develops. Judiann is a gifted food educator, and this is a perfect match for what she wants to do. She's going to build a wonderful education wing."

Agritourism is the potato of today's East End farm. At a recent lantern walk at Amber Waves Farm in Amagansett, 200 participants showed up to design lanterns out of Ball Jars and then take a simple sunset stroll around the field.

When the walk ended, an attractive cafe and retail space awaited attendees, offering Amber Waves' own hot sauces, vegetables, and trucker caps. Welcome to a successful East End farm in 2022. All on under 10 acres.

It's that sort of interest and positive energy surrounding East End farms and farm culture, in addition to the region's storied agricultural history, that Ms. Carmack-Fayyaz believes has the potential to breathe new life into the FoodLab.

"Are you interested in being a farmer but didn't inherit the family farm?" asks the class teaser at thefoodlab.org. "Master the methodology and techniques of successful and regenerative small-scale farming (10 acres and under) in FoodLab's Small-Scale Farming training program."

Ian Calder-Piedmonte, a co-owner of Balsam Farms, will teach the class, which acts as a supplement to J.M. Fortier's the Garden Market Institute Masterclass. J.M. Fortier is an internet rock star of small-scale farming.

"I plan on localizing Mr. Fortier's program. Having his class is a great benefit. Students will get that with the added perspective of a local small-scale farmer. I've learned a lot and I plan on being a great resource for students. I'm happy to be involved," said Mr. Calder-Piedmonte.

Students who complete the class can apply for a paid internship at Amber Waves for the spring and summer.

"My vision is to connect a lot of the players in this space together through the FoodLab," said Ms. Carmack Fayyaz. "We want to create a pipeline so people can get to where they want to go in the industry."

"The programs are for anyone who is interested in transitioning into the agriculture and food business. They're also for anyone who is already in the field and wants to develop additional skills. Or even for foodies who simply want to be more involved in the production of food," she said.

"You can't just grow a crop and feed a family anymore," she continued. "You need to be business savvy as well. We're gearing up to prepare people and give them the tools they need to succeed."

A course taught by Ms. Carmack-Fayyaz, How to Start and Develop a Food Business, begins in February. Through case studies, interviews, and podcasts, students will learn what made some businesses successful, while others failed.

"We'll provide the education, Amber Waves provides the apprenticeship, and then we'll connect them with the land preservationists when they're ready to start their own place. I see a whole generation of people who are interested in local food production, and I want to help break them into the world."

Geoffrey Drummond will remain as the executive director of the lab.

"We founded the Food Lab in 2015 and Geoffrey developed the conferences. He knows everybody in the food world, and has been a wonderful presence as executive director," said Mr. Reeves.

"The FoodLab is really a convener of food-interested people on the East End," said Mr. Drummond. "Our main activity and event for these first years has been holding conferences, which we'll continue, on topics ranging from eating and cooking local to diversity, to food as medicine and culinary entrepreneurship. They were very popular often gaining 200 attendees, but they stopped when Covid hit."

Ms. Carmack-Fayyaz wants to leverage the success of the conferences with the new funding to steward the program into new areas of growth.

"Ultimately I want to include horticulture. This whole discussion about food has to include landscape maintenance," she said. FoodLab will host horticultural workshops for the community in the Southampton campus greenhouse.

"We're number one in aquaculture in the state, but with our landscaping practices, we're destroying our local waters. Food is fish. We need to address that," she said. "Down the line, we hope to change the aesthetic of landscaping, and train the people who are the landscape laborers."

Interested parties can sign up to receive more information at thefoodlab.org or by emailing Ms. Carmack-Fayyaz at [email protected].