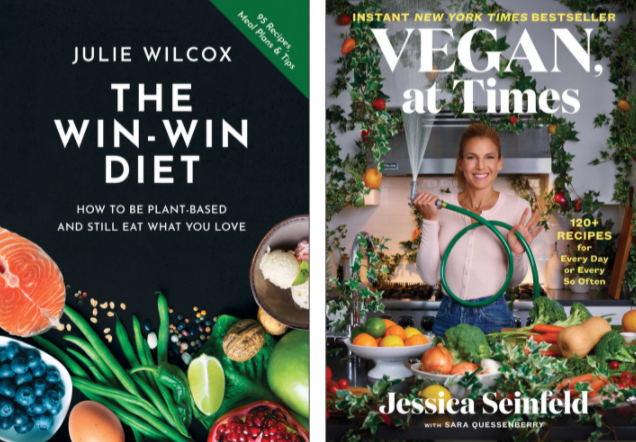 Two new books offer encouragement and no judgment in trying out plant-based eating.
By Jennifer Landes

It was at the dawn of the 21st century that vegan and plant-based eating slowly began to enter the mainstream consciousness as potentially viable choices.

Documentaries such as "Forks Over Knives," "Food, Inc.," and "Cowspiracy," taught their audiences about the risks to health, environment, and animals posed by a standard American diet. Gradually, what had been considered the diet of hippies and other countercultural types began to seem like a reasonable option. Celebrity endorsements helped too.

Back then, Whole Foods and Trader Joe's accounted for some of the few specialty stores that had exotic ingredients like tempeh, seitan, nutritional yeast, and liquid aminos, which were standbys of plant-based diets then. As online retail began to take off, shelf stable items became far easier to access. Now, those items can found in most grocery stores in America and usually within reasonable driving distance. A new emphasis on health, which wasn't always present in early vegan diets, has also taken root.

For those who just don't want to ingest meat products, meals could easily be made up of as many processed foods as a standard diet, with items such as french fries, boxed mac and "cheez," sugary cereals, and soy isolates formed into all kinds of "burgers," "nuggets," and "strips." Many sugar and fat-filled baked goods and candies also qualify under that basic criteria as long as they're not made with milk, butter, or lard.

Plant-based has come to be generally understood as a healthier and more natural approach to veganism. Consider a cookout where someone committed to plant-based eating was offered two choices: a high-fat, highly processed "fake meat that bleeds" burger or a grass-fed pastured beef burger from a local farmer. They might consider the latter.

Even though Ms. Seinfeld, who wrote the book with Sara Quessenberry, includes "vegan" in the title, the emphasis is on the "at times." Noting that she and her family are not committed vegans, she promises readers a judgment-free zone in her writing and the 120 plant-based recipes. In her hands, vegan food becomes just another menu choice like chicken or tofu for dinner and eggs or oatmeal for breakfast.

And speaking of tofu, her offerings seem to reflect the suspicion that soy isn't the miracle food that it was once portrayed as being, especially when it has been processed into other things far removed from edamame and basic tofu. Ms. Seinfeld includes three tofu recipes and nothing with tempeh, a fermented version of soybeans. Instead, the emphasis is on beans, including a recipe for her surprisingly satisfying ground "meat" substitute made from lentils, onions, walnuts, and tomato paste.

In Ms. Wilcox's book, she addresses the issue head on and comes out on the side of soy's benefits, at least the minimally processed types. She deems them a "good source of protein, unsaturated fatty acids, B vitamins, iron, zinc, and other bioactive compounds," endorsing edamame, tempeh, tofu, and natto as excellent food choices. She also addresses current concerns and studies on other categories of food like full-fat versus nonfat dairy, relying on scientific studies to reassure readers and clarify what may be their health concerns.

Ms. Wilcox, who is a wellness coach and consultant for individuals and corporate clients like IBM with a master of science degree in nutrition, takes a structured and phased approach. Her book and diet are called "Win-Win" because she maintains that a plant-based lifestyle doesn't have to be fully exclusionary of animal products. Her subtitle says it all: "How to Be Plant-Based and Still Eat What You Love."

After describing the varying degrees people can pursue a plant-based eating pattern -- flexitarian, pescatarian, vegetarian, and vegan -- she outlines a way to transition to each of them based on their current food choices, again with an emphasis on healthful ingredients.

Offering a range of exclusionary diets, she says she doesn't hold one as being better than the other, with the right choices. She urges readers not to decide they're a failure if they don't "make it to vegan." Instead, "If a vegan diet -- or any of the others -- seems unappealing, unsustainable, unattainable, or if trying it makes you miserable, it doesn't mean that you are undisciplined or incapable. It is more likely that the eating pattern is just not right for you."

There are lists of foods to include or exclude in addition to recipes and meal plans to craft a template for a personal plan. A yoga instructor as well, she weaves a thread of mindfulness through the chapters.

Instead of tough love, both of these books are reassuring and positive for those who might otherwise be intimidated when confronting dramatic dietary change. Ms. Seinfeld's "meat" recipe is so basic and easy, it gives little reason for anyone to be overwhelmed by the switch. Both also offer sample menus. Ms. Wilcox's maintains the same emphasis on structure. Ms. Seinfeld's is more of a user's guide to her recipes, which are certainly delicious, if not always the most calorie-conscious.

Ms. Wilcox emphasizes ease and accessible ingredients in her recipes, presumptively keeping the calories low by limiting the amounts of oils and nuts along with grains. Hers vary in taste experiences, which she acknowledges, and she advises readers to "move on" from recipes that they don't like and to find something that works for them that will keep them committed to their plan.

From the perspective of someone who has committed to the final Wellness Challenge offered by the Wellness Foundation of East Hampton, these are books that might be better used after that six-week cleanse. They will help you stay on track in keeping up a plant-based lifestyle, but many recipes are a bit too luxurious for the spartan, no-salt, zero oils, pure health focus of the challenge. Their recipes can be modified like all others, but obviously won't be what the authors intended.

Moving forward from the challenge, Ms. Wilcox's book could help someone figure out how to reincorporate back into their diet things like fish, eggs, or dairy. Ms. Seinfeld's book shows how to bring playfulness and luxury to plant-based recipes to make them appealing to the whole family, including kids.

A recipe from each follows.

"Meat" From "Vegan at Times"
Jessica Seinfeld describes the final product as "crumbly in texture like ground beef but so much more flavorful and healthy." She's right for the most part; no one will be fooled by it, but it is tasty. She uses it in a taco salad or on top of loaded sweet potato fries.

Bring a medium saucepan of water to a boil over medium-high heat. Add the lentils. Reduce the heat to medium and simmer for about 25 minutes or until tender. Drain into a strainer, then pass under cold running water to cool. Squeeze out excess water.

Put one and a half cups of the cooked lentils, the onion mixture, walnuts, pepper, and the remaining three quarters teaspoon of salt in a food processor. Pulse several times until crumbly, not smooth. Taste for salt; you may want to add a little more.

Store in an airtight container in the refrigerator for up to four days.

Tofu Satay From the Win-Win Diet
Julie Wilcox says, "If you're unfamiliar with or still getting used to the taste of tofu, this recipe is a great one to try. Peanut sauce is a perfect complement to tofu, and its flavor really commands the dish. Serve with a whole grain of your choice for a more complete meal."

Pat the tofu with a paper towel to absorb as much of the water it was stored in as you can. Then cut it into one-inch cubes and spear each cube onto skewer sticks (about four per stick).

Meanwhile, for the peanut sauce, add the garlic, coconut milk, peanut butter, curry powder, brown sugar, lime juice, one tablespoon sesame oil, one and a half tablespoons tamari, and cayenne to another prep bowl. Whisk the ingredients until well combined and smooth.

Once the tofu is ready, heat the remaining one tablespoon of sesame oil in a nonstick skillet over medium-high heat until it shimmers. Add the tofu skewers to the pan. Pan-fry the tofu until its skin is slightly golden, rotating the skewers so that the tofu cooks on all sides, about three minutes per side.

Transfer the skewers to a plate and drizzle with the peanut sauce. (Or if you prefer, serve the sauce on the side for dipping.)

Free Car Seat Checks in Southampton
Battle of the Books, and More Fun for Teens
This Week's Happenings in Montauk
END_OF_DOCUMENT_TOKEN_TO_BE_REPLACED