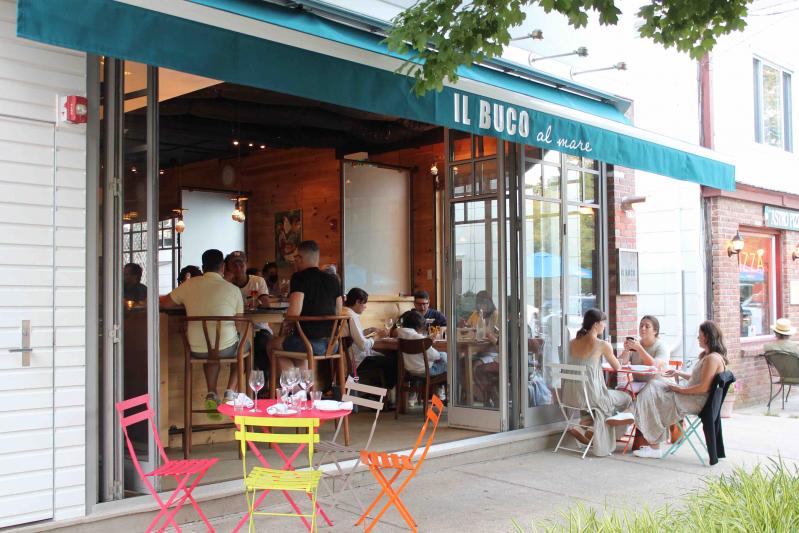 Il Buco al Mare suffers the same service issues as other South Fork restaurants in a staffing crunch, but a management team attempts to plug holes and fix problems that arise on the floor.
Christine Sampson
By Kurt Wenzel

Back in the 1990s I lived a few blocks from the Manhattan outpost of Il Buco and frequented the restaurant often. It was (and still is) known for bold, rustic Italian fare that would occasionally nod toward the exotic. I seem to remember someone ordering a roasted sheep's head at our table one night, from which I was offered the eyeball. I politely declined.

Since then, Il Buco has expanded to Ibiza and now Amagansett. Judging from two recent visits, the Amagansett branch -- officially called Il Buco al Mare -- is the most exciting new restaurant to hit the East End this summer.

It is also flawed, beset by some of the same service issues that have dogged almost all East End restaurant openings this year.

Il Buco takes over for Sotto Sopra at 231 Main Street in Amagansett. The room hasn't changed much, but then the stylishly minimalist space didn't need much attention. A wood burning oven softens the glass and metal motif and creates an atmosphere that is surprisingly warm.

The oven is used not for traditional pizza, but for what the restaurant calls an "ancient grain" focaccia, made with an imported flour from Sicily. The focaccia comes out of the oven a gorgeous golden color, and is deliciously rich in flavor. If it's pizza your looking for, the version topped with eggplant, peperoncino, mozzarella, and anchovy comes pretty close. More simply you can order a version with rosemary, salt, and nocellara olive oil, and employ it at the table as a great substitute for a boring bread basket.

There are a series of tinned items packed in olive oil, including sardines. These are served with a hearty brown bread over which you spread the sardines, along with butter shavings so dense and creamy they are almost like a cheese. I would swear I have never tasted such a rich and silky butter anywhere.

The small plate selection is superb. A baccala fritto was incredibly tender and encased in a lovely light batter, served with a tangy lemon aioli. It is a don't-miss dish. Almost as good were the head-on prawns, lightly charred and served with chili and lime. Octopus got a spicy, almost Thai-style presentation, the octopus cut into strips and without any of the chewiness you get with the commonly over-cooked incarnations.

Entrees were solid. A filet of local striped bass was roasted and served on a bed of charred corn. Long Island duck breast was pan-roasted and served with a small green salad and some under-ripe nectarines. The duck's skin was nicely crisped and the meat itself a perfect medium rare.

Dessert was a chocolate cake topped with cherries. It is dense and very rich, and probably a little too large a slice for a single person, so sharing is optimal.

Remarkably, Il Buco al Mare just got its liquor license. This is Italian food that screams out for good wine, and the idea that diners ate here for months without the good grape makes me downright teary-eyed. Luckily, we arrived just a few days after state approval, and plucked a bottle of albarino from the eclectically European (and pricey) wine list.

There is also a craft cocktails menu. We chose a Negroni, which substituted Amara blood orange liqueur for Campari. This was an interesting, if not discernibly better, version of the original.

My comments about service will sound familiar. It is problematic. This is not at all unique to Il Buco al Mare. In nearly all East End restaurants, it seems, hard-working, well-meaning people are given an apron and a dupe pad and sent out to perform a task for which they are not properly trained, and sometimes, not skilled enough to perform. I say this knowing that finding workers is not just a local, but national issue; nevertheless, this does not make the experience any less frustrating for the customer. As we were checking in, an irate woman on her way out warned incoming diners that the service was bad and that we should get ready.

Luckily, Il Buco has a team of pro-active managers who scurry around plugging holes, like a restaurant version of whack-a-mole. Generally things hold together, but with food this good, the disparity between the kitchen and the service is doubly noticeable.

Once this issue is settled, however, there is a great new restaurant in town. Il Buco al Mare will undoubtedly be a formidable player for years to come.