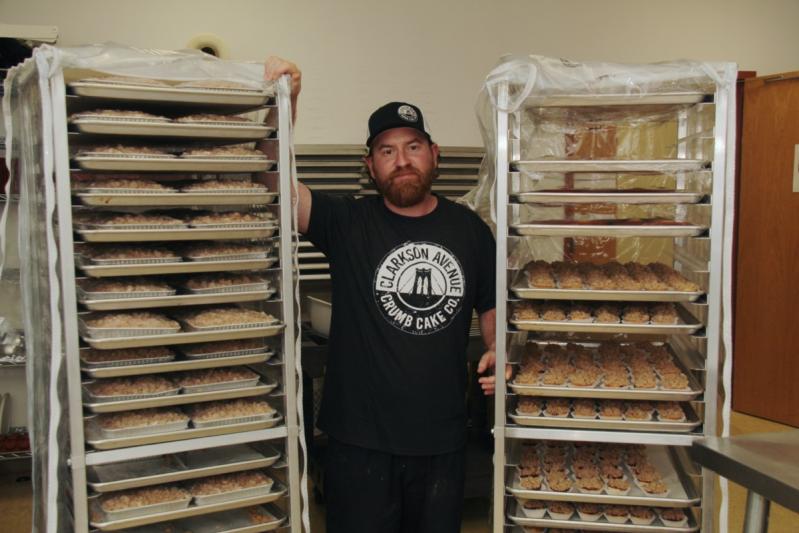 James Walsh makes more than 20 varieties of crumb cake after a recipe perfected by his mother at Stony Brook University's Food Business Incubator in Calverton.
Durell Godfrey
By Christine Sampson

The Clarkson Avenue Crumb Cake Co. makes more than 20 varieties of crumb cake, doing little to end the discussion over whether it is a breakfast food or a dessert staple. What isn't up for debate, though, is that the decision to turn a family recipe into a popular treat has yielded sweet returns.

Based out of Stony Brook University's Food Business Incubator in Calverton, Susan Walsh of Hampton Bays, along with her son, James Walsh, and Sean Tupper, a longtime family friend, have been selling their crumb cakes for the last several years at Schiavoni's I.G.A. in Sag Harbor, at farmers markets in Sag Harbor, Montauk, and Southampton, and at farm stands including Schmidt's, Babinski's, Serene Green, Amber Waves, and Spring Close Farm.

"I always tell everybody it was divinely inspired," said Ms. Walsh, a former executive assistant at a New York City law firm who grew up in the vicinity of Clarkson Avenue in East Flatbush. "The recipe is based on the cakes we used to eat in Brooklyn. The standards for that cake went way down commercially, so I used to make a 'cheater' cake when I was home with the kids, and then James was saying we have to sell this."

It took years to perfect her original recipe through trial-and-error and experimenting with different ingredients. In addition to a classic variety, there are raspberry, apple, and blueberry options, a gluten free cake, and flavors that incorporate salted caramel, chocolate, coffee, cinnamon, or cookie dough. They experiment with new types by baking samples and sharing them with fellow incubator members and customers at the farmers markets.

"We're always thinking of anything crumb," Ms. Walsh said. "We brainstorm all the time to come up with different types."

Among them, the peanut butter and jelly is her son's favorite, with peanut butter crumbs and a layer of raspberry preserves over vanilla cake.

"We're harkening back to that time when you could go to your local bakery, where you just get quality baked goods in your local neighborhood," Mr. Walsh said.

He and Mr. Tupper have been friends since they were kids, working their first jobs at a bagel store in Huntington. Before that, they said they always just assumed that the muffins, cakes, and cookies one typically finds in bagel shops and delis were actually made there, which is not universally the case.

Clarkson Avenue makes everything itself. "There are literally no shortcuts. We are doing it soup-to-nuts," Mr. Walsh said. "We're not buying any sort of premade cake mix. We weigh out everything . . . real eggs, real butter, real pure bourbon vanilla extract, Saigon cinnamon."

Mr. Walsh, who has a college degree in mass communications and a background in bartending and restaurant management, made the crumb cake his full-time occupation three years ago, and Mr. Tupper joined the team about a year later, tapping into his finance background and topping cakes with crumbs.

Ms. Walsh "has more cookbooks than anyone that I've ever met," her son said. "She's not a classically trained chef, but I'd put her up against anyone."

Clarkson Avenue sells full-size cakes and miniature versions called "Crumbkins." Now a trademarked name, the "BK" in "Crumbkins" is a tribute to their Brooklyn inspiration. Their website, clarksonavecrumb.com, also features a "build your own" option. And there's a cake-of-the-month subscription service.

From her Brooklyn roots to her East End kitchen, Ms. Walsh is thrilled that her cakes are so popular.

"It's just unbelievable, really," she said.