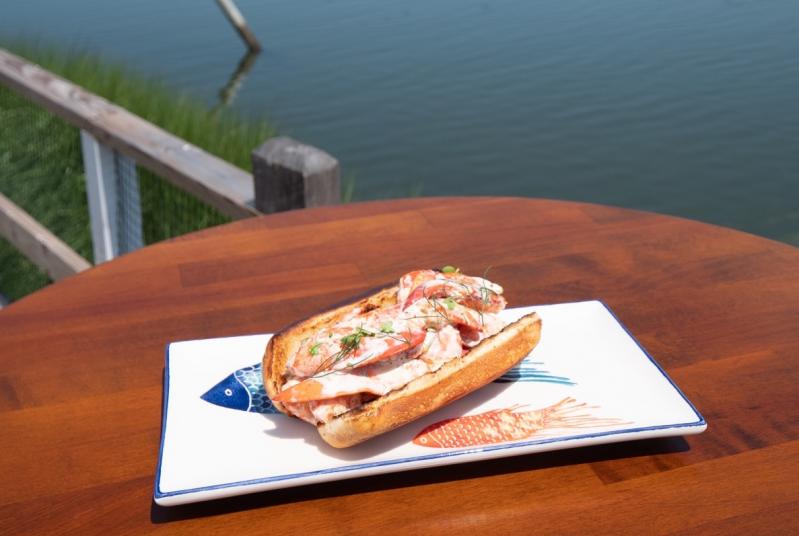 Every table has a view of the inlet at the restaurant Manna at Lobster Inn.
Robin Lee
By Kurt Wenzel

If you didn't know it before, you certainly know it by now: It is the summer of marking restaurants on the curve.

Staffing problems, matched with a mobbed tourist season, has led to a frustrating metric. Less people to work plus too many to serve equals the need for patience and lowered expectations.

Such it is at Manna at Lobster Inn in Southampton.

The old Lobster Inn, as many will remember, had a charming, olde Hamptons of yore feel to it. Cozy, a little honkytonk, and more recently, a little dingy. This space has been given a sharp makeover by Alden Fenwick, who also redesigned LuLu kitchen and Duryea's. The result is a cleaner, spiffier, if slightly sterile, new restaurant. The views are as spectacular as ever; there is nary a seat at Manna where you won't get a look at the inlet below.

The restaurant has declared a dedication to sustainable seafood -- they even own a fish farm near the property. And there is no doubting the freshness of the seafood here. As testimony, there is a lavish raw shellfish display behind the bar as you enter that is sure to get your mouth watering.

A good way to dive in is through the various seafood towers. We had the Sunset, which included oysters, clams, shrimp, crab salad, and a fresh, but slightly watery, ceviche. (If you're inclined, the towers can keep doubling in size, until you get to the Lobster Inn at $195.)

Another entry point is the simply grilled fish selections, which include salmon, tuna, and the catch of the day, prepared plain or with blackened seasoning and served with a romesco sauce and arugula salad. All are cooked to perfection and seem day-boat fresh.

And then there is the splat, second only to the lobster roll as a signature Hamptons seafood dish. A fixture at the Lobster Inn for decades, the Manna team was wise to bring it back. For the uninitiated, the splat is basically a mammoth shellfish boil, this version containing lobster, clams, mussels, shrimp, chorizo, and corn. At $95 it is more expensive than the old version, but also bigger, fresher, and better, with more than enough food for two.

It is when you start to veer away from raw or simply prepared seafood, however, that things at Manna start to get iffy. An appetizer of ricotta meatballs, for example, were just okay, a great texture marred by a bland marinara. Fish and chips were fine, but a little skimpy on the fish, which amounted to three smallish strips.

A lobster grilled cheese came out way over-griddled -- which is to say charred -- leading to a crunchy, dry sandwich with less lobster meat than you were hoping for.

And if you're wondering how a sea trout and caviar carbonara could possibly work, wonder no more. It does not. The dish comes vastly over-sauced, the few strands of spaghetti not covered reaching out as if for a lifeguard to pluck them to safety. Ours was also wildly over-salted, so that a mouthful of sauce coupled with the already salty black caviar was downright brackish and highly unpleasant.

For dessert skip the key lime pie in favor of the excellent berry crumble. It is also huge, arriving in a baking dish the size of a small dingy, and served with two scoops of vanilla ice cream. It is big enough for three, even four, people to get a few bites each.

Like many restaurants these days, service is a combination of capable veterans and bright-eyed youngsters who may have put an apron on for the first time just a few hours before. Everyone is friendly, hard-working, and doing their level best to keep up in an overwrought situation.

Word is that Manna at Lobster Inn is operating at 50 percent capacity until they settle in and can marshal a full staff. This seems wise. As we exited, however, there was a line of at least 25 people at the host stand, presumably with reservations and waiting to be seated. By my estimation those guests would put the restaurant at nearly full.

Manna at Lobster Inn remains a work in progress. Opening a new restaurant is hard business, and Manna has done good work so far under difficult circumstances. Few could doubt that with their own fish farm, sharp renovation, and spectacular views there is the foundation for a great future.