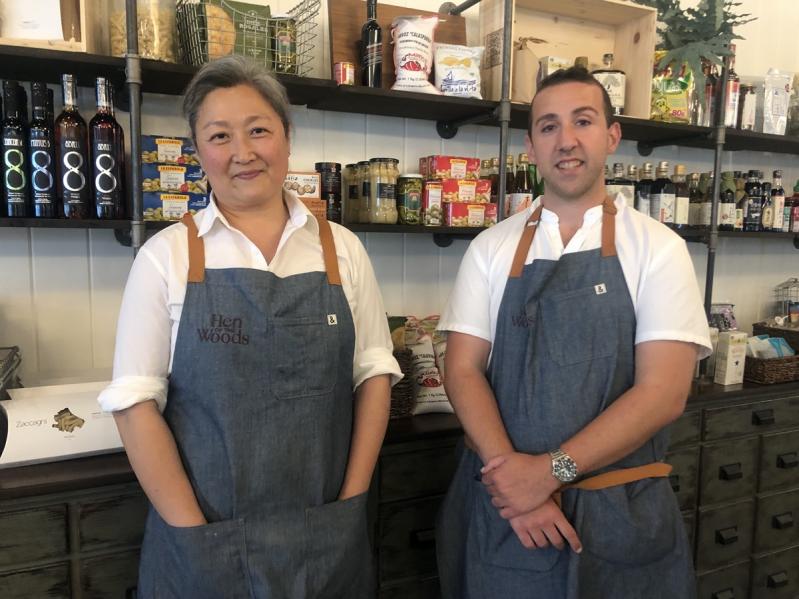 When it comes to exotic culinary delights, Hen of the Woods, a new shop on Hampton Street in Southampton Village, boasts some very fancy feathers.

The purveyors of this fine fare are Suzy Yang and Jonathan Bernard, two friends who met while working in the local food scene and opened their new business on May 1. Mr. Bernard was a mushroom grower and delivery guy who would drive 60,000 miles a year during the four years he was delivering mushrooms throughout Long Island and the tristate area. (The shop is named after the giant hen of the woods, or maitake, mushroom.) Ms. Yang was a restaurateur behind last year's pop-up sushi spot in Sagaponack and had long dreamed of having a store like this.

"We're in the make-people-happy business," Mr. Bernard said. "You see people come in and try something, and they're ecstatic."

"The two things that are important to me are good food and good company," Ms. Yang said, "and this shop combines both."

They have a friendly neighbor in La Parmigiana restaurant, which, during the pandemic, discovered it did not need as much dining room space as it then had, and welcomed Ms. Yang and Mr. Bernard. The door connecting the two spots is still functioning, allowing two Hen of the Woods chefs, Kait Kelly and Alex Murray, to work their magic in La Parmigiana's kitchen. Ms. Yang's husband, Jae Yang, an artist and restaurateur himself, designed Hen of the Woods's new coop.

Ms. Yang and Mr. Bernard are both avid cooks themselves, so they relate deeply to their clientele.

"A lot of people try to elevate their cooking these days, especially after the past year," Ms. Yang said. "We like to provide some unique items they can use."

She was surprised but thrilled to discover that folks here have an appreciation for Asian staples like kimchi and gochujang (fermented red pepper paste, often used in Korean-style barbecue).

Similarly, there is an appetite for Latin treats like Bonilla a la Vista's baked version of patatas fritas (potato chips), which come in a metal tin that looks like a paint can, and which are "such a popular item that the supplier we get it from has been rationing them," Ms. Yang said.

On their website, the two entrepreneurs say they source their products ethically and responsibly in an "approachable" way, with the background of "exactly where everything is coming from, so that knowledge and information can be shared with our customers to further their experience."

A miso-glazed salmon fillet for $15 hit the spot recently for this writer's hungry husband, and a $35 bottle of barrel-aged soy sauce made a pleasing, practical gift to a loved one from Japan.

Hen of the Woods also offers space to entrepreneurs with skills that complement its offerings. Donald Neuman, for instance, does traditional Japanese knife sharpening there on Thursdays from 2 to 5 p.m. (he can be found at nearby farmers markets on other days). On a recent Thursday afternoon, Mr. Neuman called Hen of the Woods "the real deal."

Hoedown on the Farm, Cocktails in the Garden
Main Beach Free Concerts in Final Weeks
Services and Counseling After Death of Popular Teacher Assistant
END_OF_DOCUMENT_TOKEN_TO_BE_REPLACED