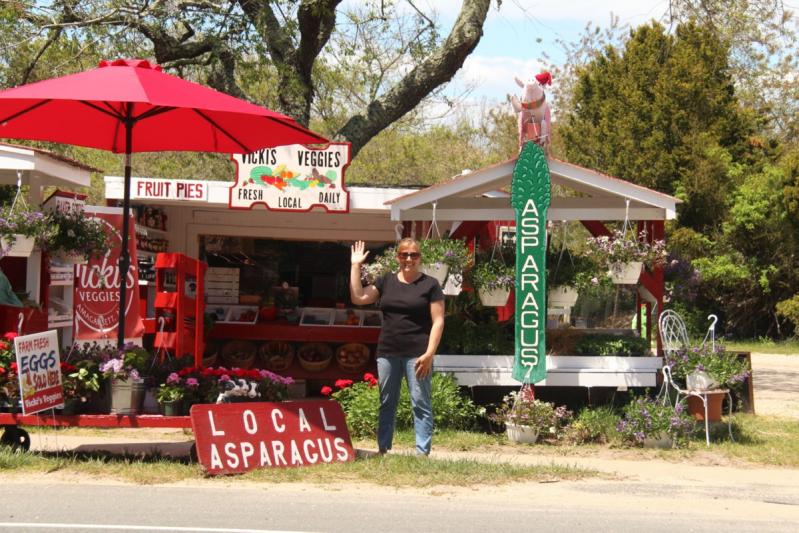 Vicki Littman outside her enduring farm stand, which celebrates its 40th anniversary this year. <
Durell Godfrey
By Irene Silverman

The sheep goes baa-aah, the goose goes quack-ack-ack, and the chickens go cluck-cluck. As for the customers, they go, "Vicki, the stand looks great!"

In the fields out back of Vicki's Veggies in Amagansett, all kinds of vegetables and flowers are growing. The asparagus has been a huge seller this spring, and the string beans will be ready any minute now. If you're expecting to buy lamb to go with them, though, forget it. "Those are my pets!" Vicki Littman exclaims, laughing. "Once you name an animal, you would never eat it!"

You might well call Vicki's Veggies, which is celebrating its 40th anniversary this year, the Little Farm Stand That Could. Survive, that is. Ms. Littman was 11 years old in 1981 when, in response to her plea to let her sell their vegetables in front of their house on Route 27, her father, Les Jones, built a stand. At the time, recalled her mother, Elaine Jones, "I said no. I didn't want to put her on the highway." By the time Vicki finished college, though, "I finally had to say to her, 'You have to come back, Daddy and I can't do this.' "

In fact, there are not just two generations of women working side by side at the stand, but three: Vicki's girls, Rose, 21, and Maria, 17, help out whenever they can, especially in summer. Their mother takes quiet pride in the hard-working females of the family, who, she noted in passing, are following in some well-trodden local footsteps. "Women farmers have been in the Hamptons for decades," said Ms. Littman, citing Pat Struk of the Amagansett Farmers Market and Carolyn Lester Snyder of Round Swamp Farm. "It's nothing new."

Plenty else is new, though, at Vicki's Veggies, following last year's pandemic season, during which masked customers shopped through their car windows in a drive-through setup that turned out to work surprisingly well. "We were so busy," Ms. Jones said, shaking her head. "I would never dream they wanted to stay in their cars."

"I don't know that I could survive another such summer," Ms. Littman said. "It was a lot of work. Waiting on people, picking out stuff -- it was so important that everyone get one-on-one service."

This year, for the first time, there's off-the-highway parking, a good use of vacant space next to Ms. Jones's house, which sits on about two acres. It is one of a half-dozen houses in a vast family compound east of Amagansett. "In 1903, Grandpa DellaPolla paid $500 for the whole block" after arriving from Nusco, Italy. "Nobody's ever sold out."

Strawberries are in now, and corn's coming any minute, both grown on the North Fork, picked in the early morning, and delivered daily. (Corn is a very big seller at Vicki's; get there early on Sundays in particular before the weekenders on the way home from Montauk clean the place out.)

Vicki Littman, who is way up there on everyone's list of civic-minded people here, donates 2,500 ears of corn (you read that right), plus a ton (literally -- 2,000 pounds) of watermelon every year to the Amagansett Fire Department's annual chicken barbecue (which didn't happen in 2020 but will this year, in late August). The vice chairwoman of the Amagansett Citizens Advisory Committee, she is also head of a food pantry and of the hamlet's beach safety advisory committee, which was established by the town a few years ago after a drowning off of Beach Hampton. Beach locations in Amagansett and Napeague are numbered at intervals now, thanks to that committee, enabling rescue personnel to get where they're going much faster.

Ms. Littman has been urged to expand, especially to Montauk, "but I have never wanted to. I can't be in more than one place. Here, I know what's going on. I'm happy with what I built and what I have. For me, it's being with my customers, some of whom have been with me for 40 years, supporting Vicki's Veggies and all the while becoming like family."

She lives in Springs now, but "Vicki will have my big house someday," Ms. Jones said. "I will never sell," said Ms. Littman. "Either the land or the stand that my family worked so hard for."

Hoedown on the Farm, Cocktails in the Garden
Main Beach Free Concerts in Final Weeks
Services and Counseling After Death of Popular Teacher Assistant
END_OF_DOCUMENT_TOKEN_TO_BE_REPLACED