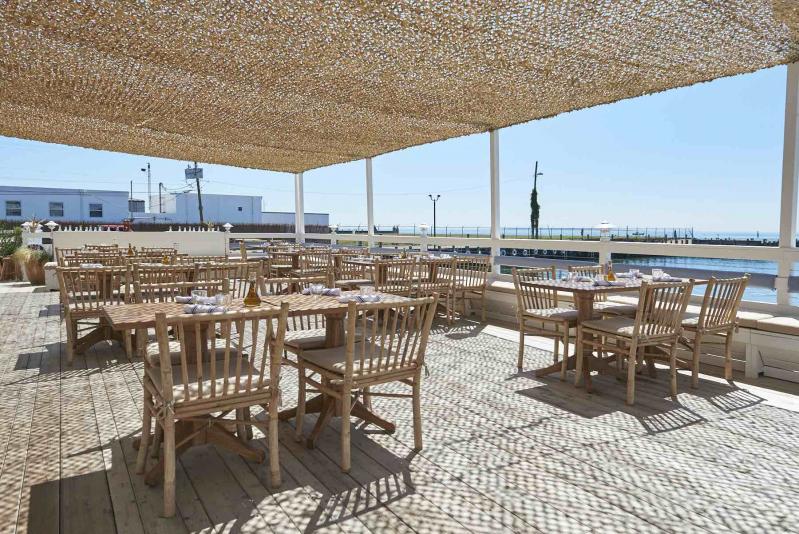 Duryea's Orient Point, a sister restaurant to the Montauk eatery Duryea's Lobster Deck, has reopened for the season on the waterfront in Orient Point.
Doug Young
By Jamie Bufalino

New in Springs
Rita Cantina, a new Mexican restaurant from the owners of the Food and Co. catering business, will open for dine-in and takeout today at Maidstone Park in East Hampton, in the space of the former Bel Mare and Michael's restaurants.

The menu features appetizers such as tuna ceviche tostada with avocado and charred pineapple aguachile, and battered fluke tacos with pickled cabbage slaw and crema, and entrees such as duck carnitas with butter lettuce wraps, guacamole, and salsa, and a whole fish roasted on cedar with citrus. The cocktail menu features a selection of tequilas, agaves, and mezcals. A picnic kit with tacos and margaritas, and a s'mores kit with Mexican chocolate, house-made graham crackers, and marshmallows will be available for takeout. The restaurant will be open Wednesday through Sunday from 4 p.m., and will offer $1 oysters and $10 margaritas and glasses of wine between 4 p.m. and 7 p.m.

Artists' Table Brunch
The Watermill Center's Artists' Table brunch series returns starting on June 5. From noon to 2:30 p.m., a farm-to-table meal by Martine Abitbol, an acclaimed chef and restaurateur, will be the backdrop for private presentations by Rachel Dickstein, an Obie Award-winning theater director, and Tomashi Jackson, a multidisciplinary artist who is the 2021 recipient of the Watermill Center's Inga Maren Otto Fellowship.

Tickets to the brunch series are sold in groups of four (for $400) or six ($600). Meals are outdoors and pods of guests are seated socially distanced from one another. Tickets can be purchased via Eventbrite, and for additional information or questions, an email can be sent to [email protected].

Now at 1770 House
The 1770 House in East Hampton has an $85 three-course prix fixe dinner special, and a new menu of shared dishes. Entrees on the prix fixe menu include seared scallops with bacon-braised endive, cara cara orange, and a nori and mirin emulsion; roasted salmon with green lentils, snap peas, preserved Meyer lemon, harissa, and cilantro, and braised rabbit leg with semolina pasta, a carrot and Parmesan broth, and nettle pesto. The shared dishes include oysters on the half shell with wild onion flower, cucumber, and pink pepper mignonette for $22 for six and $38 for 12; a half-ounce of Regiis Ova caviar for $60, and burrata with summer truffles, pistachios, honey, house-made fennel pollen, and sea salt focaccia for $24.

Alfresco at Fresno
Fresno in East Hampton will resume offering outdoor dining in its parking lot starting next Thursday. Reservations are strongly recommended. The restaurant is open Thursday through Tuesday from 5 p.m. This week's nightly special entrees include a grilled pork porterhouse with braised black beans, avocado, radish, and a guajillo chili sauce for $36, red lentil dal with bamboo rice, papadum, and coriander for $28, and roasted tilefish with dashi broth, wild mushrooms, baby bok choy, and Asian slaw for $42.

In Montauk
Hello Coco, a new restaurant and bar at the Breakers motel on Old Montauk Highway in Montauk, is open daily from 10 a.m. to 10 p.m., and offers outdoor dining, and contactless ordering for dine-in and takeout service. The Hawaiian-themed menu features items such as salmon poke for $15, veggie or spam fried rice for $16 and $19 respectively, fish tacos for $20, spicy coconut chicken for $28, and crab Rangoon dip for $14.

Springs Tavern
The Springs Tavern has a $25 taco and margarita special on Tuesdays, and a $35 prix-fixe prime rib dinner on Wednesdays. The tacos will be offered with a different filling each week, and the prime rib dinner comes with sauteed haricots verts, a glass of wine, either Caesar salad or clam chowder, and baked or mashed potato.

Open for the Season
The Southampton Social Club on Elm Street is open for the season, but it is only accepting guests who have been fully vaccinated for Covid-19. Reservations are mandatory, and guests will be given a maximum of 90 minutes to dine. It is open Wednesday through Sunday from 5 p.m.

Harvest on Fort Pond in Montauk is open for outdoor dining, and is accepting reservations for indoor dining one week in advance. It is open daily from 5 p.m.

Duryea's Orient Point, a sister restaurant to the Montauk eatery Duryea's Lobster Deck, has reopened for the season on the waterfront in Orient Point. It offers indoor and outdoor seating and is open from noon to 10 p.m. Mondays, Thursdays, and Fridays, and from 11 a.m. to 10 p.m. on Saturdays and Saturdays. Starting next week, it will also be open on Tuesdays and Wednesdays.