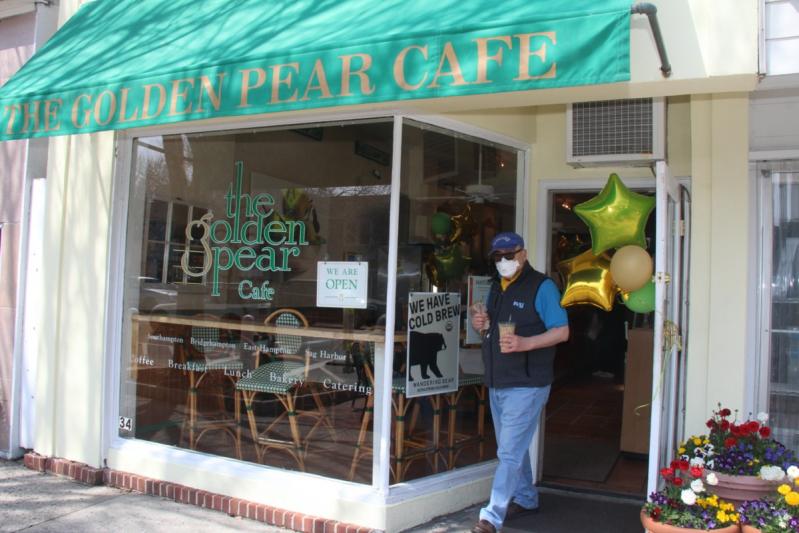 The Golden Pear location on Newtown Lane in East Hampton Village is celebrating its 30th anniversary, which was officially on Monday.
Durell Godfrey
By Jamie Bufalino

It's been 30 years since the Golden Pear Cafe first opened on Newtown Lane in East Hampton Village.

At the time, "the feeling was totally local," said Keith Davis, the owner, in a statement announcing the anniversary. "Dreesen's Market and donuts, lots of hip boutiques, the Village Police station, a local photography shop and stationery store, they really were wonderful, local business people."

In the late 1990s, the rents began to rise, and the street became filled with more high-end national brands, he said, but the Golden Pear survived through the years by becoming a place that catered to its original regulars and a changing East End clientele. The cafe has also been a favorite of high-profile visitors including Former President Bill Clinton, singing stars such as Jennifer Lopez and Diana Ross, and Hugh Jackman, the actor.

"The menu and the products and the service has broad appeal to the largest number of people in the marketplace," Mr. Davis told The Star. "Ninety percent of what we're offering is gourmet American fare, and we've always had the best coffee, the best baristas, and the best employees around." Some of his employees have worked at the cafe for 30 years. The other secret to his success, he said, is "I love what I do, and the people I've met through the years have been great."