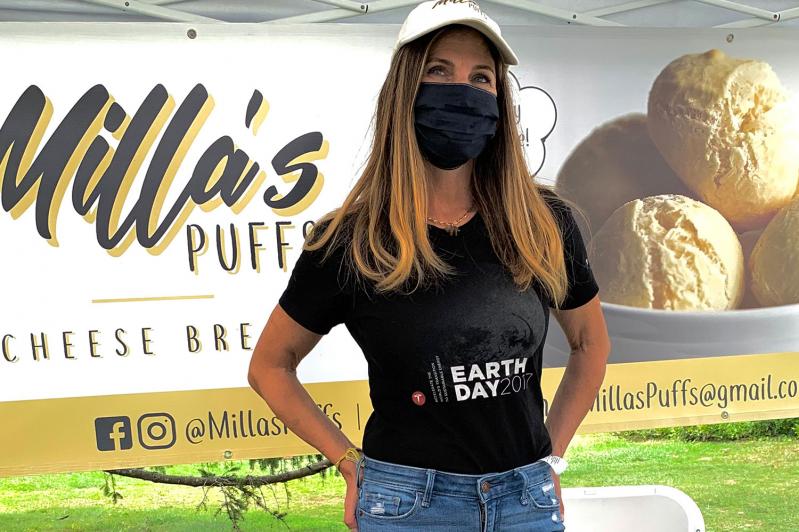 Ludmilla Benevides is the force behind Milla's Puffs, her take on a classic Brazilian bread.
By Jennifer Landes

Known around the East End for her bossa nova song stylings with her guitarist husband, Marcello Pimenta, Ludmilla Benevides, or more familiarly Milla, has also enjoyed cooking for friends and family as another way to share Brazilian culture with them.

In 2015, it gave rise to Milla's Puffs, a six-ingredient cheese and cassava flour bread that she prepares ready to bake in individual buns for a fresh-from-the-oven treat that is also gluten-free.

This past year, having a side hustle really paid off, or at least paid the bills. When the duo's appearances at venues such as Pierre's, Baron's Cove, Sole East, and others stopped abruptly because of Covid, Mr. Pimenta could still find solo work playing guitar. As the singer in the group, "I had to rely on the cheese puffs," Ms. Benevides said, to help support the family, which includes a daughter, Anabel, still in high school.

She started the business by filling 30 quart-sized plastic containers a day and selling them at farmers markets. Several years later, Milla's Puffs are in several stores, including the Provisions locations in Sag Harbor and Water Mill and Serene Green in Noyac, with a kitchen at the Stony Brook University business incubator at Calverton and equipment that can crank out 2,000 puffs per hour. She estimates she makes 250 packages a day, now in branded bags with all of the nutritional information. Stores in Wantagh and now Huntington are also stocking her product.

A native of Rio de Janeiro, Ms. Benevides said she and her husband first visited New York City at the invitation of his twin sister in 1997. "She said bossa nova was very big here. We came and we jammed in a couple of clubs, even in the subway. We played for a half-hour there and made almost a hundred bucks."

When they went back to Brazil, they looked for a sponsor so they could return to New York. "I was doing music in Brazil with big-shot musicians who were traveling all over South America. It was actually easy to get a visa." Two months later they had a sponsor and started to play in New York City.

"We met other interesting people, like caterers, who said we should move to the Hamptons," she recalled. "With all of the private parties in the summer, they said we should be able to get a lot of gigs."

Having attended private schools in Brazil, her children had a tough time in the public school system in New York City. They moved to Hampton Bays and started to work with Sant Ambroeus, which, in addition to its restaurants, supplies catering and entertainment for private parties. "From there it was history, we started giving out our cards and established our life here." They now live in East Quogue.

They were busy and happy, but "after a couple of years I decided I needed something else just for me. I always liked to entertain and provide food for my friends and family." The puffs were one of her most popular dishes. "Everyone who came to my house would ask, 'Can you make the cheese puffs?' "

Called pao de queijo, or P.D.Q. for short, the bread, which is formed into small buns, is made from cassava (also known as tapioca flour), milk, eggs, and cheese. When baked, they puff up and come out fluffy, but with a chewy texture. They originated in Brazil with enslaved people who made the bread without the cheese, which started being added in the 19th century.

From the beginning, her son, Fred, now an adult, has been most encouraging and supportive. "He gave me the confidence to pursue my dream." His girlfriend at the time designed her first label and logo. "I wanted something very homey and cozy that would remind me of my childhood."

Through the incubator, she learned the practical side of the business and got all the required licenses and insurance. She has her own kitchen in Calverton to prevent cross-contamination and keep the bread completely gluten-free. "My product is safe for people who have allergies or celiac. It's very serious."

She noted that she liked balancing the practical mechanics of the business with her more organic and intuitive approach to music. "It's a hustle," she said, in terms of the time and energy her business requires. With regular orders from stores to fill, she's still at farmers markets for the exposure and to gauge consumer response, and regularly mails the buns to clients in five other states.

Brazilians have used tapioca across their cuisine for centuries as a thickener in stews and other recipes, and even in crepes. Cassava, a root and not a grain, "doesn't spike the blood sugar and is low glycemic. It's a healthy carb."

An interest in gluten-free food and keto and paleo-friendly bread products has buoyed demand.  Although not vegan, her bread works well with fillings like mushrooms and grilled vegetables.

Her latest project is brainstorming with friends to devise a new flavor to add to the original and the tomato and basil puffs, and to design its label and packaging. "It's not an easy process, but I'll get there."