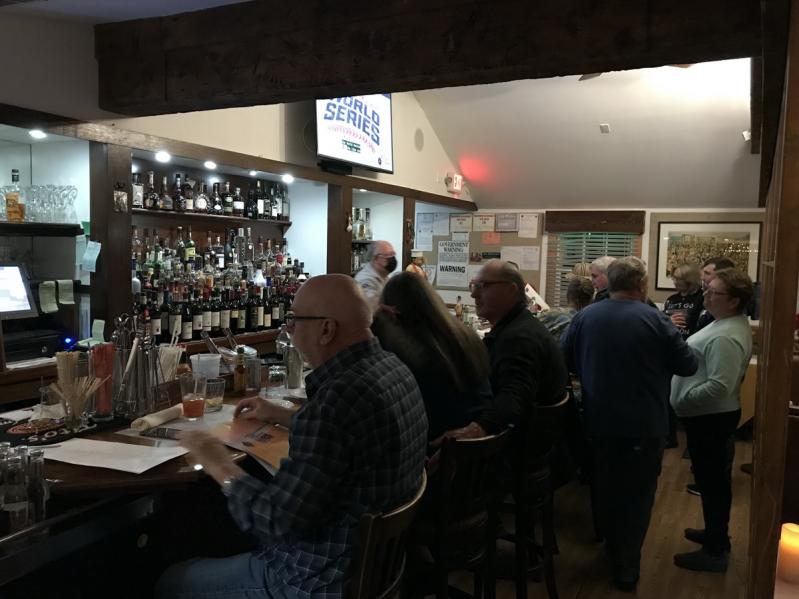 The Blend's busy bar, like the rest of the restaurant, has an old East Hampton feel to it.
Mark Segal
By Kurt Wenzel

Some restaurants are not designed for critics. They're not trying to break new culinary ground or show off the chef's grasp of food architecture; nor does the decor follow the latest trend in minimalist design or compliment the diner's ego with its high style. These are generally known as "crowd pleasers" -- simple, straightforward establishments that fulfill a neighborhood need.

It's with this in mind that we consider the Blend at 367 Three Mile Harbor Road in East Hampton.

Although this is the Blend's fifth year, it still seems pretty off the radar to people who don't live in Springs. Not that this is holding the restaurant back. Two recent visits showed a full bar and two small dining rooms nearly at capacity.

The food -- which is an array of American, Italian, French, and a few Asian favorites -- is solid but rarely great. So why the brisk off-season business?

The first reason, I believe, is nostalgia. The two rooms -- a main dining room with a bar and a smaller "pub" room -- have a homey, old-time East Hampton feel. Those that can remember may find themselves in a time warp circa 1980 with its cozy booths, kitschy Christmas display, and video fireplace. It is also warm and welcoming, and I suspect the mostly local crowd enjoys basking in an atmosphere that recalls a less pretentious time on the East End.

Portion size may also contribute to its allure. A Moscow Mule Royale, served in a pint glass with not much ice, was indeed enough for a king -- and his queen too. A Dark and Stormy, also in a pint glass and lightly iced -- had enough rum to take down a caribou. Neither was particularly well made, but I'm guessing that is beside the point.

By the time the food arrives, the drinks will have you ravenous. You're in good hands. Plates range from oversized to colossal, and it seems that this is part of the bargain. Looking around the dining room, to-go boxes were all the rage. Baked into the price, it seems (entrees up to $75, with a $45 fixed price meal option) is the idea that one can have dinner at the Blend and also have enough left over for the next day's lunch.

The offerings are straightforward classics. We had an autumn greens salad of arugula, endive, and radicchio, with pecans, Gorgonzola cheese and balsamic vinaigrette. It's excellent and enough for two, the plate towering with greens.

Less exciting is the "flash-fried" calamari (really just a classic version), cut into small rings with a garlic, celery and ginger seasoning. Ours had a slightly chewy texture, though a chili aioli sauce did liven things up. Better are the Thai style mussels, steamed with lemongrass, red curry paste, and coconut milk, and nearly an entree-sized portion.

There are also raw oysters and clams available with the fixed price menu, served with both cocktail and mignonette sauce. The shellfish are medium-sized, cold, and very fresh.

It is with entrees that you move into the realm of colossal. The Tomahawk veal chop ($15 supplement) is Flintstone-esque, fattier than it should be and served with plenty of red wine demi-glaze. The bone-in presentation is so overwhelming you'll hardly even notice the medley of string beans and asparagus hiding under the brontosaurus bone, but they're pretty good.

Also behemoth are the pasta dishes. You have to love it that the rigatoni comes with both sweet and hot sausage, and chorizo, along with broccoli rabe and garlic. Unless you've just run a marathon, there will definitely be enough for tomorrow's lunch, if not dinner, too.

A Faroe Island salmon was fine, slightly bland even with the wasabi crust, but it was a hearty-sized filet with rainbow baby potatoes. It followed the restaurant’s pattern of large portions matched with merely serviceable preparations.

The good news for wine-lovers is that the bottle list here is -- do I need to say it? -- huge. A ring-bound dossier is plopped down on your table when you ask for it. It took us three tries, however, to find a bottle in-stock, a red zinfandel from Markovic, sturdy enough for the hearty food.

You'll hardly be surprised that desserts have names like Steak House Style Cheesecake -- the large slice is served with chocolate sauce, berries, and whipped cream. Better is the chocolate mousse cake, which seemed fresher, and again came with berries and whipped cream.

So, critics be damned. The Blend hits the middle of the road and proudly stays there. The only thing that will really knock you out here are the high octane drinks, but you will not leave hungry or unsatisfied. And with a little imagination, you could find yourself -- for a few hours at least -- recalling a simpler time in East Hampton.