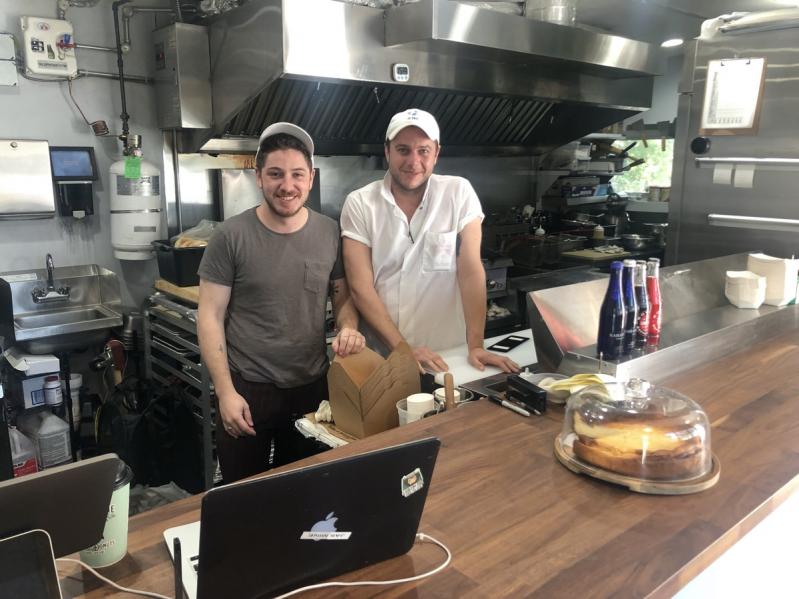 Alexis Krisel, right, is the founder of Lil' Birdie, a new takeout spot in Sag Harbor focusing on fried and rotisserie chicken. At left is Kye Vatash, a key part of the business's operations.
Christine Sampson
By Christine Sampson

When ordering from Lil' Birdie, one of last summer's new additions to the Sag Harbor food scene, here's a word of advice: Do it as soon as it opens for the afternoon, or your favorites will be sold out before you can say "the early bird catches the worm."

Alexis Krisel hatched the idea for Lil' Birdie, and brought in a good friend, Kye Vatash, to help out. The fried chicken and falafel takeout spot opened July 4 weekend in the Division Street space formerly home to the Sag Harbor Baking Company.

Both veterans of the restaurant industry here and in New York City, the two friends met in 2018 at a rooftop barbecue pop-up at a Brooklyn music venue called Elsewhere. Mr. Krisel hired Mr. Vatash to work that evening. "It was love at first sight," Mr. Vatash joked in an interview last week.

Fast-forward to the arrival of the Covid-19 pandemic, when the city's near-total shutdown led Mr. Krisel, 35, to move from the city to a house he owns in Southampton, and Mr. Vatash, 28, to return to his hometown of Sag Harbor from a cross-country road trip and move in with his father. Mr. Vatash had been considering abandoning restaurant work altogether, but was intrigued by Mr. Krisel's proposal: How would you like to open a fried chicken place right here?

"Sag Harbor has burritos, burgers, and pizza, but there was no fried chicken," Mr. Krisel said. They got to work remedying that.

The menu of chicken and falafel options is simple yet thoughtful: four types of sandwiches; choose fried or grilled chicken or a totally vegan falafel. There are five kinds of side dishes, four different dipping sauces (also vegan), and rotisserie chickens by the half or the whole, brined for a whole day before they're cooked. There's also dessert, which was Basque cheesecake on the day of this interview but will soon be a different daily treat instead.

A sandwich dubbed the Bee's Knees, topped with hot honey and bread-and-butter pickles, is a flavorful introduction to Lil' Birdie's offerings. The Gaijin, with house-made kimchi and samurai sauce, is an adventure in taste (with a name drawn from Mr. Krisel's moniker when he lived in Japan). And the rotisserie chicken, only available after 4 p.m., flies miles and miles above any grocery-store bird you can buy.

Mr. Krisel and Mr. Vatash have been selling between 150 and 200 sandwiches a day plus 20 whole chickens. They'd stock up more, they said, but their walk-in fridge is tiny. They also make chicken nuggets with nuggie sauce for the late-night crowd at Murf's Backstreet Tavern.

Last Thursday afternoon, customers popped in and out with messages of "congratulations" in addition to rave reviews of the food. One of their regulars, ironically, is a cardiologist who comes all the way from Hampton Bays. "We'll get people saying, 'My doctor recommended coming here, make sure you get the fried chicken,' " Mr. Krisel said.

They serve their chicken with a helping of humor. There's an "employee of the week" poster, but since they're the only two employees right now, the poster is a different chicken picture each week.

Also important to them is a culture of inclusivity, accessibility, and positive vibes — all aspects that can be extremely hard to come by in the restaurant biz. "We want to make sure we're keeping to who we are," Mr. Vatash said. "We do feel like we're creating an experience here, even though we're takeout."

Lil' Birdie is closed this week, but will reopen next week with a Tuesday-through-Saturday schedule and additional menu items coming soon. Customers can place orders on its website.

This story has been updated and corrected since it first appeared in print.