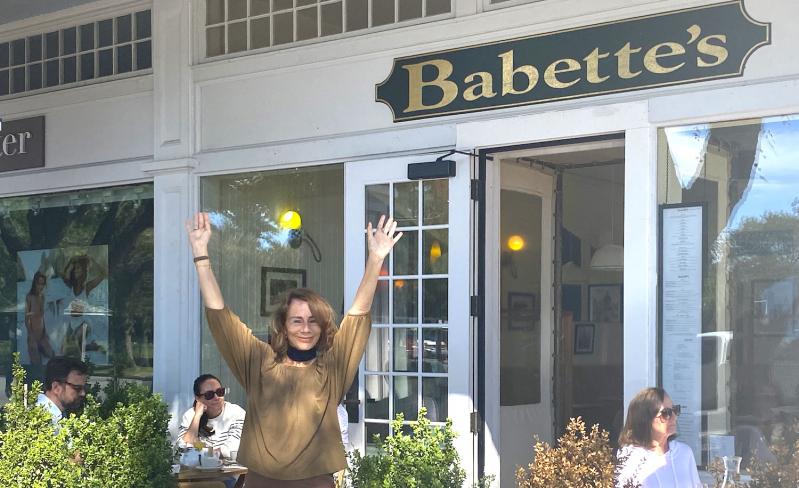 Barbara Layton in front of Babette's, a Newtown Lane institution since 1995 that she has announced will close on Sunday.
Jamie Bufalino
By Jamie Bufalino

"With the pandemic, with losing so many close friends, and realizing how quickly life moves forward, for me, it was about, 'Let's see what the next adventure is,' " she said. "I'm not walking away from this thinking, 'Thank God it's done,' not at all. The arduous part was making the decision, and not continuing to do this every day, because I love this."

She had felt a similar need for a new adventure nearly three decades ago when she changed career paths from being a Montessori school teacher to becoming a restaurateur. She borrowed $10,000 from a friend to launch Babette's, and "about two years in, we had paid back all our debts, but we were heading into the winter and realized we had no more money," she recalled. A customer helped her secure a small business loan, which gave the restaurant a chance to find its footing.

"I've learned more about myself in this business than I possibly could have any place else," said Ms. Layton, who has made the most of the experience. "I've always been on the floor, and part of the team, and I wanted it like that from the very beginning. I didn't want to be behind the scenes."

Her presence at the restaurant gave her a chance to meet a wide array of high-profile guests, including Bill and Hillary Clinton. "We're still really good friends," she said of the former first couple. "Every August they come in to eat, hang out, and relax."

After she broke the news to customers, "Most people ask me, 'You're still going to be part of this community, right?' and the answer is, 'Absolutely. I love this place,' " she said. "I'm going to give myself some time to walk the beautiful beaches like I do each sunset, just be in awe of this environment, spend some time with friends, and write."

She plans to write a book that will be part cookbook, part memoir. "I will be writing about the Babette's adventure, life, learning, and taking risks." She also plans to explore other ways to give back to the community. "Whenever I choose my next adventure I always ask the same question, 'What's wanted and needed?' I want to see how I can serve best next."

Manna Anniversary
To celebrate its first season, Manna at Lobster Inn restaurant and aquaculture center in Southampton will hold a cocktail party with free hors d'oeuvres and door prizes from 6 to 7:30 p.m. on Monday. Reservations must be made by Thursday by calling the restaurant.

It's Specials Season
La Fondita in Amagansett, which is now open Friday through Tuesday only, has new daily specials. On Fridays, chili-braised beef with consomme and corn tortillas is $14, and a pork enchilada with rice, refried beans, and salad is $19. On Saturdays and Sundays, the chili-braised beef special is available, and chicken or pork tamales are $6 each. On Mondays, a gordita with a choice of meat or avocado is $14, and crispy masa dough with the same choice of toppings is $9. Both come with lettuce, queso fresco, crema, rice, and refried beans. On Tuesdays, fajitas with either chicken, shrimp, or carne asada are $16 to $21 and come with rice, refried beans, salad, and flour tortillas.

Union Burger Bar in Southampton will have appetizer specials, and $7 drafts of Allagash beer next Thursday from 5 to 9 p.m.