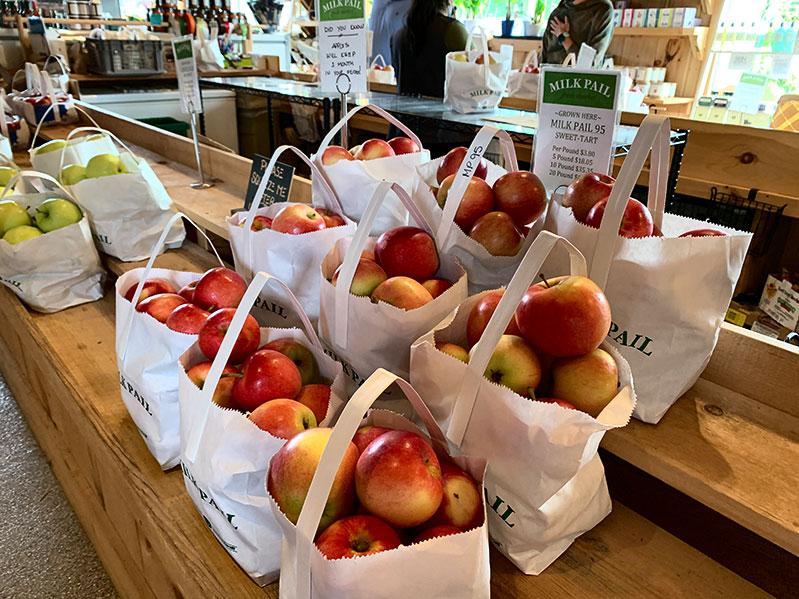 A variety of apples are available to suit all preferences for taste and texture, some introduced just this season at the Milk Pail.
Laura Donnelly
By Laura Donnelly

At the beginning of September Cornell University's College of Agriculture and Life Sciences released three new varieties of apples. They are NY 56, NY 73, and NY 109, but let's call them by their sexier names: Cordera, Pink Luster, and Firecracker.

It just so happens that you can try some of these apples at the Milk Pail in Water Mill, where Pink Luster is also known as MP 24. I bought a bag of these pale beauties before I headed up to the Poconos to visit some friends. We took them along on a hike and as each person bit into their apple, silence fell upon the group. Well, silence except for the "crunch crunch" of apples and the reassuring tinkle of our bear bell. Yes, there are black bears up in them there hills! After a few minutes, we all agreed, these apples could be the best eating apples we had ever had.

People around the world have different tastes in apples. According to "The Oxford Companion to Food," the Brits like a cooking apple that dissolves into a mush, and they like an eating apple that tastes a bit nutty because the frequent companion to apples (since the Victorian era) is port. Predictably, this encyclopedia of food claims that "in the U.S.A., apples are judged more by their appearance, and red varieties are preferred." The French have no problem with russet colored apples with mottled matte skin.

Cornell AgriTech, located in Geneva, N.Y., is the oldest apple breeding program in the country and it's pretty darned cool that the Halsey family's farm works in collaboration with it. John Halsey describes the Pink Luster -- a.k.a. NY 73, a.k.a. MP 24 -- as "pleasingly different. Their medium to large size makes them fun and easy to pick, and they have a wonderful mild tart flavor and very smooth enjoyable skin texture."

Apple growing and picking season is staggered, with some varieties appearing at the beginning of September and then different ones arriving in mid to late-October.

The Milk Pail's U-Pick orchard is one of the biggest out here, with over 23 varieties of apples. Its shop on Montauk Highway sells fresh apple cider, iconic apple cider doughnuts, and an amazingly curated selection of local foods, from Art of Eating's mac 'n' cheese to Vine Street Cafe's mushroom Bolognese sauce to the long extinct Blue Canoe barbecue sauce.

Seriously, this is one of the most fun shops to poke around in and then stock up on tasty treats.

One of the great things about apples is how long they can last when stored properly. Months, really. Their versatility in cooking, year-round availability, and reasonable price makes them the "everyman" of the fruit world. Try making applesauce and pairing it with some grilled sausages from Villa Italian Specialties. Mix up a batch of tart and sweet apples in a pie, dry slices for healthful snacking, coat them in caramel and make your dentist happy, cut them up into a fall salad with endive, toasted walnuts, and a salty cheese from Mecox Bay Dairy. The possibilities are endless.

Apples are one of the healthiest of fruits as well, high in fiber, vitamin C, and polyphenols, which function as antioxidants. A great deal of these polyphenols are in the skin, so wash your apples and eat the skin! There are close to 7,500 varieties of apples grown around the world, 2,500 grown in the United States, and approximately 100 varieties grown commercially in the U.S., according to the University of Illinois Extension.

Apple picking is about as healthy an activity as you could hope for these days, perfect for social distancing, short attention spans (you can pick a bushel with your munchkins in mere minutes), and providing a bit of fresh air and exercise. Here are some recipes to inspire you.

Preheat oven to 425 and set a rack to the center position.
Roll out one disc of chilled dough on a well-floured board until it is an eighth of an inch thick and about 12 inches in diameter. Place over a nine-inch pie pan and gently press it into the corners of the pan. Trim any excess dough with a pair of scissors, leaving an overhang of about an inch. Freeze for 10 minutes. Save and chill the trimmed bits as well.
Roll out the second disc of dough to the same diameter, cut a steam hole out of the center, and chill in the fridge.
Peel, core, and cut the apples into three-quarter-inch slices, then place in a large bowl with cinnamon, allspice, salt, sugar, flour, and vinegar and toss to combine. Place filling in prepared pie pan. Place second rolled dough on top of filling. Trim both crusts, leaving a half-inch overhang.
Crimp the edge as you like (there is a too-long description in the recipe, I think you can do it). Patch any holes with the spare dough.
Freeze the pie for 20 minutes. After removing, place on a parchment-paper-lined baking sheet, brush with cream, and sprinkle with sugar. Bake on center rack at 425 for 15 minutes, then turn oven down to 350 and bake until done, approximately another 45 minutes. Allow pie to cool for two hours before slicing. Serve with vanilla, cinnamon, or caramel ice cream.

Preheat oven to 400. In small bowl, mix together brown sugar, dried fruit, and nuts.
Place the apples in a baking pan or casserole dish and stuff their cavities with the fruit and nut mixture. Place a piece of butter on top of the stuffing.
Pour apple cider and maple syrup into bottom of the baking pan and bake the apples, basting every five to seven minutes, until they are tender, 25 to 35 minutes.
When apples are tender, transfer them to a serving platter and cover with foil to keep warm. Pour the pan juices into a small saucepan and bring to a boil over high heat. Simmer the mixture until it becomes syrupy and reduces to a sauce, about 10 minutes. Pour over apples.
Serve with yogurt, whipped crème fraiche, or ginger ice cream. For a composed dessert, add Guinness Stout ginger cake.