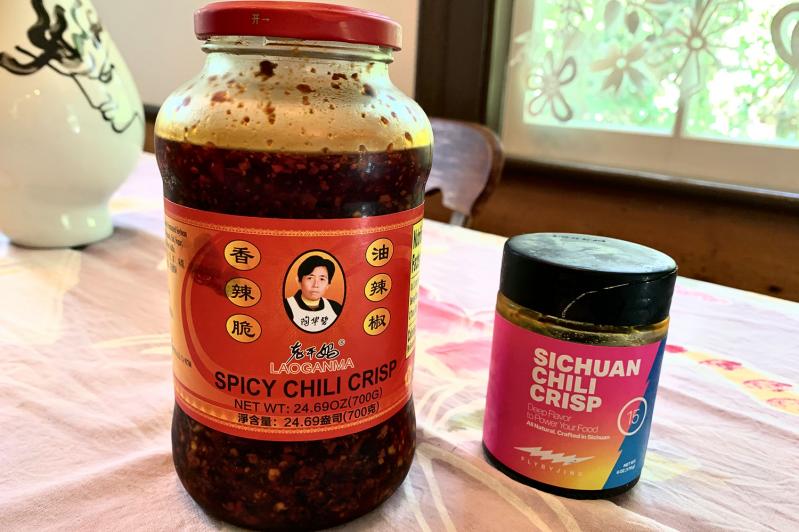 One of the weird but popular uses for chili crisp is drizzling it over soft serve ice cream. It has also been incorporated into peanut brittle.
Laura Donnelly
By Laura Donnelly

The genesis of this story was the necessity to create something tasty with very few, and quite disparate, ingredients. I was at my shack at Lazy Point awaiting a social distancing sunset visit from Justin and Tony. I keep what I consider the bare essentials at "camp," such as basic condiments for burgers and sandwiches, eggs and Parmesan cheese, ground coffee in the freezer, crackers in the bread box, and minimal spices. Old Bay and Goya's adobo seasoning mixes are excellent multipurpose sprinkle-ons! I also always have garlic, shallots, and onions in the fridge, along with oranges, lemons, and limes.

"What can I make for them?" I wondered. Deviled eggs! I patched these together but they lacked the vinegary pickle crunch that can be a nice addition to cut the creamy fattiness of the yolks and mayo. I had a few tablespoons of sauerkraut which balanced the flavor but gave the eggs a disconcerting stringiness when you bit into them and pulled out a strand of cabbage. Oh, well.

Then things got freaky-deaky, or as the Chinese call it: hei an liao lit, or "dark cuisine." Justin and Tony had made a pilgrimage to H Mart in Hicksville, the food emporium with all things Asian. I had asked them to bring me some Sichuan chile crisp which they presented to me in an industrial-strength jar. They had never tried it so we opened the jar of Lao Gan Ma or "old godmother" sauce. They were immediately smitten and talked about all of the tasty possibilities for this popular condiment that was just invented in 1996. It is crunchy and crispy, salty and oily, full of umami with a slight numbing effect from Sichuan peppercorns. It makes you wish you had a dish of green beans or freshly steamed dumplings to anoint with it.

It was after they left that I discovered the accidental, potentially disastrous but ultimately successful combination of deviled eggs drizzled with Lao Gan Ma chile crisp. From now on, I will be adding this to deviled eggs. And hummus, and dips, and burgers, and fish, and many vegetables.

Dark cuisine comes from "Chuuka Ichiban" or "China's Number One," a 1990s Japanese manga by Etsushi Ogawa about a boy chef in 19th-century China who battles an underground crime syndicate called the Dark Cooking Society. The concept has occasionally veered into strange food combinations merely for shock value, but some are born of necessity and genuine creativity.

Sichuan chile crisp is known throughout China as the "patron saint of bachelors and college students." The original Lao Gan Ma was invented by a widow named Tao Huabi who opened a noodle shop in Guizhou. Her chile crisp sauce was so popular she began bottling it in 1997 and became one of the country's richest self-made billionaires. There is now a magazine Lao Gan devoted to this versatile condiment.

More recently, a young woman named Jenny Gan created (with the help of Kickstarter) a more natural Sichuan chile crisp called Fly By Jing. This has no MSG and she gets the umami punch from mushrooms and kombu. This excellent brand is great for vegans.

One of the weird but popular uses for chile crisp is drizzling it over soft-serve ice cream. It has also been incorporated into peanut brittle. That sounds better to me.

Some accidental discoveries have been: Amy putting cinnamon on her rice salad thinking it was pepper. This worked. Chimene thought she was putting cinnamon in her homemade sea-salted dark chocolate coconut ice cream but it was cayenne. Tanya remembers her father pouring chocolate sauce over leftover rice. The family teased him about it, but they all secretly liked it. However, Maury recently accidentally poured ketchup, thinking it was chocolate syrup, over his last bit of vanilla ice cream. Epic fail. He also recalled a childhood dessert of strawberries with heavy cream, sopped up with fresh white bread. Teresa likes bananas with sour cream.

Deena, another chef, suggested bruléeing that idea with a bit of sugar and red chile powder.

The last, and definitely grossest sounding combo came from my friend Julie in New England. (I point that out because Marshmallow Fluff was invented in Somerville, Mass.) Fluff and cod. Let that sink in. I honestly can't imagine how that could work but then I thought of how wonderful Thai crispy whole fish with sweet chile sauce is. A German restaurant in Somerville honors Fluff with Fluff'n'Speck (smoked pork belly) on challah.

And here are some ideas to inspire you. How about broccoli cheese casserole topped with Cheetos. This is a real thing! Olive oil over ice cream. Strawberries with balsamic vinegar and black pepper. Peanut butter, banana, and bacon sandwiches, an Elvis favorite! Bourbon and pickle juice, known as a pickle back. Mango with chile powder, pomegranate with meats, either as a sauce or marinade, goat milk caramels, miso with butternut squash. Somebody thought of these combinations and most of them work beautifully!

There is no doubt that a lot of dark cuisine ideas came out of stoners' dorm rooms at 2 a.m., but many strange food combinations come about out of necessity.
In our attempts to limit trips to the grocery stores, and with the supply chain continuing to be messed up, it may be a good time to explore hei an liao lit. Let your 6-year-olds loose in the pantry and see what they come up with! You never know, dark cuisine may actually brighten your day.

China Moon Chili Orange Oil
The commercial version of Lao Gan Ma was created in 1996, but variations of it have existed for many years before. It turns out I have been making a version of it from Barbara Tropp's "China Moon Cookbook" for a long time, without knowing its roots. This particular recipe may have come about when Sichuan peppercorns were banned from import. In 2005, the ban was lifted. I've shared it before, but it's worth repeating. This is delicious and is good on almost anything. It also keeps for a long time in the refrigerator and makes swell gifts for friends who like spice.
Makes about two and a half cups.

Wash the oranges very well. Peel away the thin layer of orange zest, leaving behind the white pith. Finely mince the zest.
Combine minced zest with all of the remaining ingredients in a heavy, nonaluminum two to two-and-a-half-quart saucepan. Bring to 225 to 250 degrees on candy or deep-fry thermometer over moderately low heat, stirring occasionally, and let bubble for 15 minutes. Remove from the heat and let stand until cool.
Scrape the oil and seasonings (the goop) into a glass or plastic container, cover and store at cool room temperature or refrigerate. This is excellent stirred into noodles or meatloaf.

Sichuan Chile Crisp Peanut Brittle
Here is a recipe from a website called Taste. I usually add about three-quarters of a teaspoon baking soda to the brittle just before spreading onto a sheet pan, which is what gives it a light, airy texture. This recipe does not call for baking soda so I'm guessing it will be very hard-candy crunchy.

Spread butter evenly over a cookie sheet.
In a saucepan combine the sugar, salt, and water and bring to a boil. Stir and reduce heat to a gently steady boil. Continue to cook, stirring occasionally, for about 10 to 15 minutes, or until the color turns golden brown and it begins to smell toasty. Remove from heat.
Stir in the peanuts and sesame seeds, immediately followed by the chile crisp. Quickly stir to distribute, then pour onto the buttered cookie sheet and spread in an even layer as thin as you can. The mixture will harden in a few seconds so work quickly. Let cool a few minutes, then break up into pieces and enjoy.