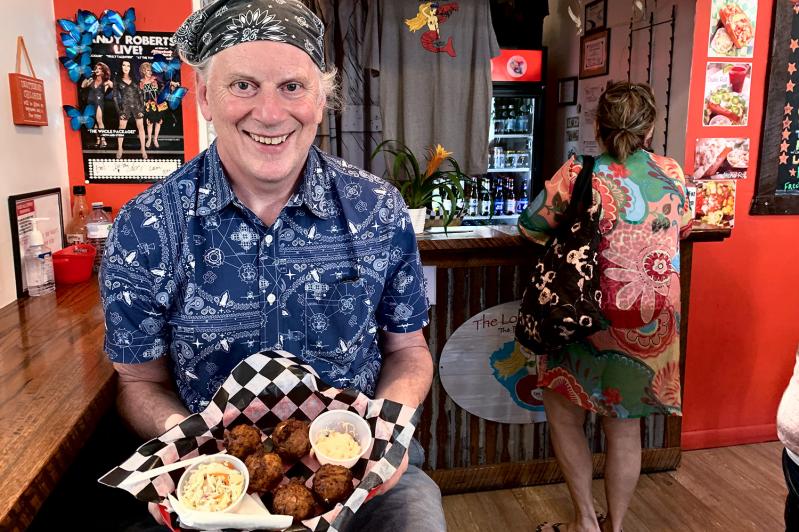 Bill Ritchie with the conch fritters served at the Lobster Shack in Key West, Fla.
Laura Donnelly
By Laura Donnelly

He spat out the words with the disdain and confidence of a career waiter: “Most of the restaurants here just buy the mixture in buckets and scoop it out to order.”

This was the opinion of Nate, our waiter at Cafe Sole in Key West, on the sorry state of that beloved street snack and bar staple of many islands, the conch fritter.

I haven’t had a conch fritter in over 30 years; eating deep-fried stuff isn’t on my to-do list anymore. But the alarming possibility that this classic Bahamian delicacy has now devolved into a Number Forty scoop and a mass produced tub o’ goo is rather distressing.

I had to get to the bottom of it.

I made a list of the more obvious locations to try: the Conch Shack, Conch Republic Seafood Co., B.O.’s Fish Wagon, the Key West Original Conch Fritter Cart. Beyond those, my friends and I would just sample them willy-nilly wherever they were on a menu. My friend Bill was hugely enthusiastic about trying any local fish, but he was having difficulty grasping the concept of a fritter. I tried to explain that a fritter is allowed to be mostly breading and seasonings, whereas with a crab cake or other fish cake situation, it would be considered a cheat.

The flavor of conch is hard to describe. It is mostly bland, slightly salty, slightly sweet, and it can be tender or tough, depending on how it has been treated. It is delicious as a carpaccio, ceviche, and in chowders and stews. In Italy it is known as scungilli. While queen conch used to be plentiful, it is now mostly imported. The name “conch” covers a lot of snails, whelks, limpets, and mollusks. The meat inside the conch shell is entirely edible, has 22.4 grams of protein per three-ounce serving, and is also rich in vitamin A and iron.

I have to confess that almost every conch fritter was identical, and the sauces varied only slightly. B.O.’s Fish Wagon is one of those purposefully funkadelic locations that once was on a food TV show and as a result has seen tourists swarming to it like lemmings ever since. I find the food bland. Its conch fritters (six for $9) were served with a pretty good tartar sauce. The Conch Republic Seafood Company’s (seven for $10) version of conch fritters was very good, served with a tart lime mayonnaise. Its peel ’n’ eat shrimp were excellent; ’tis the season for fresh Key West pinks.

The Conch Shack version was nondescript, served by a sullen Eastern European fellow. Every single employee at every single location, by the way, denied that their establishment used pre-made conch fritter batter. The Key West Original Conch Fritter cart (six for $7.50) served its fritters with a super hot chipotle mayo, and you could distinctly taste lime and garlic in the dough, as promised.

Most fritters had finely ground or minced conch meat; some had fairly large chunks. The sauces served alongside were mostly cocktail, Key lime-mustard mayo, or a sriracha-chipotle pink mayo. In a few of the fritters you could see a bit of diced green peppers.

So we had tried every establishment within walking distance, a.k.a. the “10-toe turbo,” that claimed to have the best conch fritters. At this point we decided to try them anywhere we came across them on a menu. The Lobster Shack, on upper Duval Street, had the most expensive at five for $16. Perhaps the coleslaw served with them added value? They were okay.

One evening we stopped by Frita’s Cuban Burger for the burger (superb!) and we tried the conch fritters, which were served with pickled peppers and slivers of chorizo tossed in with them. Their flavor was good, but they were slightly soggy, possibly due to under-frying or the oil not being up to temperature.

One day I went off on a toot with my friend Blondie the bartender from Cafe Marquesa. We went to Geiger Key Marina Fish Camp and RV Park. We went for the view of the mangroves and hogfish tacos, but I had to order the “Killer Conch Fritters,” six for $10.95. These fritters had the most and chunkiest conch meat of all and I immediately recognized the familiar flavors of sage, thyme, and onion. By golly, I’m pretty sure Geiger Key Marina was making its fritters from “scratch” with Pepperidge Farm stuffing mix! Brilliant.

We never ate a bad conch fritter, nor did we taste an extraordinary one, but it was a fun, educational, exploratory mission.

Although I’m not going to go home and whip up some conch fritters, it is fun to contemplate what can be used or substituted locally for conch meat. Clams, whelks, snails, limpets, they’re all the same really and are ideal for chopping up and adding to a savory bread batter. Our very own Craig Claiborne referred to our “Bonacker Clam Fritters” as “Americana, pure and simple.”

Here is a recipe for clam fritters and a healthier conch recipe that will appeal to those who also avoid deep-fried anything.