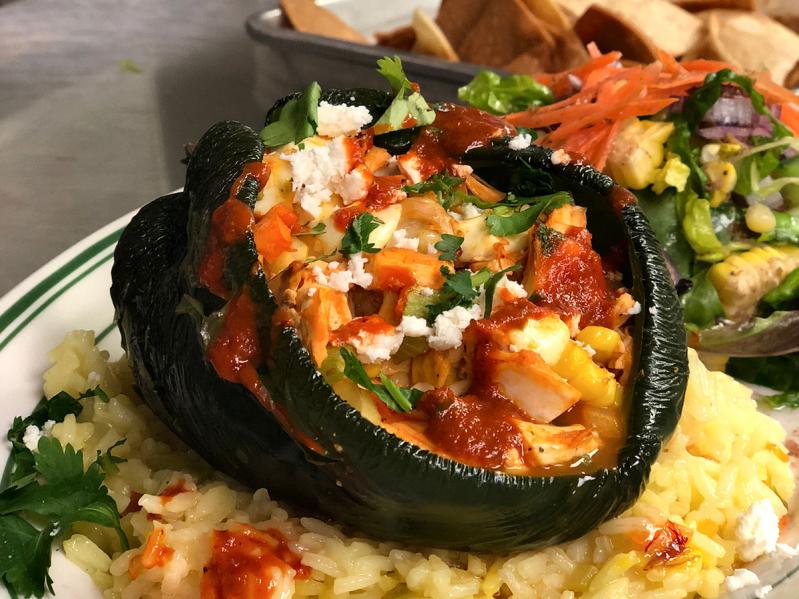 Colin Ambrose loves his nontraditional take on chicken chiles rellenos in the fall, when poblanos are abundant at South Fork farms such as the Foster Farm, Quail Hill, Balsam, and Amber Waves.
Estia's Little Kitchen
By Mark Segal

With corn and tomatoes soon to be disappearing from our local farm stands, The Star asked several chefs what fall ingredients inspire them and how they plan to use them.

"There's no supermarket replacement for fresh leeks and cauliflower right out of the ground," said Jason Weiner, the executive chef and proprietor of Almond in Bridgehampton. His recipe for cauliflower oyster chowder celebrates leeks from Pike Farm and cauliflower from Quail Hill. "Getting oysters involved makes it a whole delicious hat tip to the amazing stuff we are lucky enough to have in front of us out here on the East End."

According to Jeremy Blutstein, a private chef who has led many East End and New York City restaurant kitchens, "Late summer and early fall means time to cure and smoke bluefish. I know people here like to hate them, but I sure as hell don't. I like to use a wet cure/brine, then smoke them with alder or applewood."

Of his recipe for chicken chiles rellenos, Colin Ambrose of Estia's Little Kitchen in Sag Harbor said, "I love this dish during the fall, as poblanos are abundant locally at farm stands like Balsam and Foster's as well as Quail Hill and Amber Waves. The dish is not a particularly traditional relleno preparation. It's a stuffed poblano with chicken and cheese that's finished in a bed of rice in the oven. I've found it popular with guests who like to share and with hungry river guides in the wilderness."
The recipes follow.

Place the butter in a heavy-bottomed pot on low heat. Add the onions, cauliflower, garlic, and a couple pinches of salt. Stir often with a wooden spoon until the vegetables become translucent. You don't want the vegetables to take on any color, so attention and a low flame are important.

Add the wine and bundle of herbs. When the wine is no longer releasing an alcohol aroma, add the clam juice. Simmer gently until the vegetables are mushy. Remove the herbs from the pot and discard.

Add the shucked oysters and leeks. Simmer for a minute and then puree the chowder in a blender with the creme fraiche. Season to taste with salt and white pepper. On the pickup, poach three oysters. Garnish with chives and paprika.

Jeremy Blutstein's Smoked Bluefish
"Cracked into salads, whipped into rillettes, on a bagel with cream cheese, topped with soft scrambled eggs . . . localism at its finest," he said.

Leave the skin on the fillets in the brine and cure for 48 hours. Then place brined fillets on a rack on a sheet tray in the refrigerator overnight to dry. Hot-smoke at 150 degrees for 2 1/2 to 3 hours. Once out of the smoke they can be stored in a nonreactive container submerged in a neutral oil like grapeseed or canola and stored in the refrigerator for up to a month.

Colin Ambrose's Chicken Chiles Rellenos
While written for outdoor cooking over an open fire, the recipe can be easily adapted for home cooking.
Serves four.

If cooking this outdoors or riverside, you'll need a large cast-iron skillet with a top.

Start by roasting a chicken in advance, or buy a roasted bird at the store. Chill and remove all meat. Bones can be used to make stock, or store-bought chicken broth can be used.

Dice the carrots and onions in advance and store in Ziploc bags.

Once on site, build a fire and allow it to burn down a bit prior to getting started. Mix the saffron and wine, allow the mixture to bloom for an hour or so.

Place your skillet above the flame, add vegetable oil, then the carrots and onions. Once soft, remove half of the vegetable mix into a bowl, place the rice in the skillet with remaining aromatics and stir. Then add the saffron wine, cover the skillet, and remove from flame to a warm spot.

Now make a slit alongside each of the poblanos and remove as many seeds as you can. Combine the eggs, chicken, adobo, and cheese in the bowl and season with salt and pepper. Stuff the peppers to the max.

Return the rice to the flame and stir in chicken stock, a shake of salt, and place the stuffed peppers on top and cover.
After a few minutes open the top and check. If rice has absorbed all liquid, add a cup of water. Remove from direct heat and finish on a warm side over coals.

Leave covered and take to the table to serve after cooking for at least 30 minutes. The trick is to cook but not burn the bottom.

Serve with a simple salad and toasted bread.