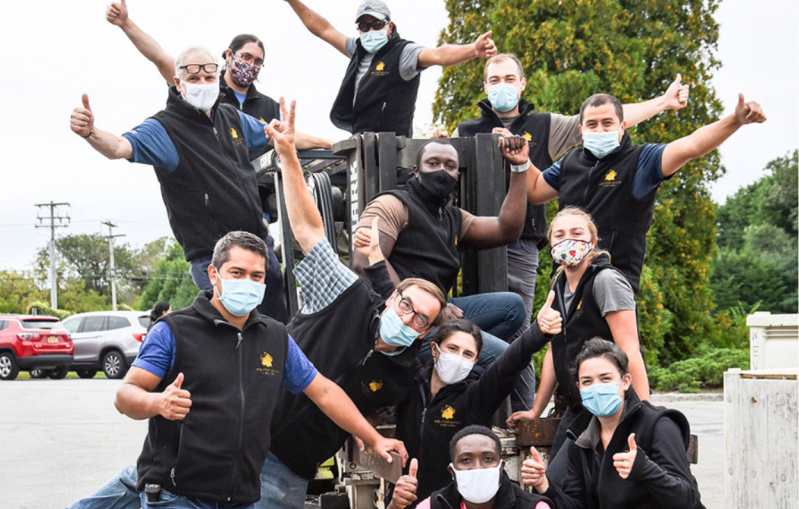 Social distancing and masks have not dampened the enthusiasm of the winemaking team at Wolffer Estate Vineyard.
By Jamie Bufalino

Not even a global pandemic can prevent East End vineyards from producing a banner crop of grapes according to local winemakers.

"The fruit is in pristine condition," said Richie Pisacano, the winemaker at Wolffer Estate Vineyard in Sagaponack. "Harvest is in full swing."

Crews have been picking grapes for the winery's roses, as well as the vignole variety, which are placed in a freezer and used to make the Diosa ice wine, he said. The fruit for sparkling wine has already been plucked, said Emily Ely, the winery's marketing director, and the harvesting of red grapes will begin shortly.

"The fruit is clean, ripe, and intense, and has the freshness, balance, and elegance that makes our wines so special," said Roman Roth, a co-owner of the winery.

Workers wear masks and maintain social distancing while in the fields as well as in the cellar, where they hand-select the grapes, Ms. Ely said. "They're working seven days a week in rotating shifts," she said.

Erik Bilka, the winemaker at Duck Walk Vineyard in Water Mill and its sister winery, Pindar Vineyard in Peconic, is also finding the grapes particularly "clean" in condition and flavor. After a hot, dry summer growing season, he had noticed signs of drought stress on some of the fruit, he said, but the lack of major storms during harvest is helping to maximize the yield.

Still, he plans to remain vigilant and deploy his crews whenever weather conditions allow. "At this time of year, you can't have a plan for more than the next two days," he said.

Because an especially fertile growing season has produced well-ripened grapes, "We're picking when we want to rather than around rain," said Larry Perrine, a co-owner of Channing Daughters in Bridgehampton. Christopher Tracy, another co-owner and the winemaker has been happy with the harvest, he said.

To maintain a safe work environment, the winery conducts daily health checks on all employees, there are touchless dispensers of hand-sanitizer both indoors and outdoors, and harvesting crews wear masks and gloves. "We've purchased massive amounts of personal protective equipment," he said.

"We're at half time and we're very happy with everything," said Rich Olsen-Harbich, the winemaker at Bedell Cellars in Cutchogue. The winery has harvested its white grapes, and is now moving onto rose. "Pinot gris and sauvignon blanc are early ripeners," he said.

He's been working with a crew of five who don masks in the field. The processing and crushing of grapes takes place outdoors at the vineyard, so creating safe conditions has been fairly easy, he said. Fermentation happens indoors, he said, but, even pre-dating the pandemic, the space has been well ventilated because carbon dioxide is released during the process.

If all continues to go well, said Mr. Olsen-Harbich, this year's vintage should provide a welcome bright spot in an often-bleak year. "I think we'll have some really good wines, so some good things will come out of 2020," he said.