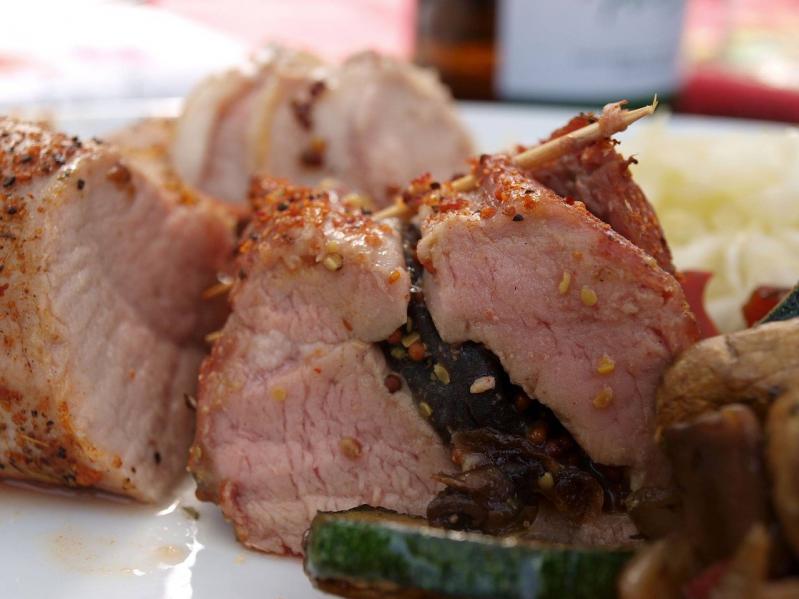 I eat a lot more vegetables and whole grains than meat. If I were to sit down and analyze my diet, it would almost seem vegetarian. Nutrition is important to me, but I don’t obsess about foods, fats, cholesterol, mercury, carbohydrates, acai (Oprah’s miracle fruit!), corn syrup, tapeworms, sugar, blue and orange fruits, lead in my ancient crockery, or anything else that 90 percent of the people I know worry about.

I have always chosen olive oil over butter (forget margarine), fresh over processed, and homemade over prepared foods. I am neither skinny nor fat and I enjoy every meal. I am an omnivore and believe in everything in moderation. This includes meat, specifically pork. Poor, poor, misunderstood pork.

Pork comes from one of the world’s oldest forms of livestock. Domesticated as early as 5000 B.C., pigs produce the most widely eaten meat in the world, accounting for 38 percent of daily consumption, despite religious restrictions in some cultures. China is first in pork consumption. They consider it more appetizing, cleaner, sweeter tasting, more economical, and easier to digest than beef. Europe is second, followed by the United States, Russia, and Japan.

Pork is very high in niacin, selenium, thiamine, vitamin B, phosphorus, riboflavin, and zinc. It contains all available proteins and all essential amino acids. Pork produced today is 16 percent leaner and contains 27 percent less saturated fat than 15 years ago. A fourounce serving of lean pork has the same fat content as a skinless chicken breast.

I’m not saying it’s okay to “pig out” on some spare ribs and bacon and sausage, but it is okay to enjoy the occasional moderate (four-ounce) serving of lean meat. Pork tenderloin is one of my favorite cuts.

Some of the dangers associated with pork are virtually obsolete. Because pigs are also omnivores (eaters of meat and vegetables), they used to be fed all manner of raw meat garbage. This could give them tapeworms and trichina spiralis, the parasite that can cause trichinosis in humans. Since 1980, no livestock has been fed raw garbage, reducing the incidence of trichinosis to between 1 and 10 cases per year in this country. It is in fact believed that most of these cases are a result of wild game meats like bear, boar, and walrus(!).

If you read older cookbooks, you will also be told to cook pork to the welldone stage (170 to 180 degrees), which is also no longer necessary. It is perfectly safe to cook a tenderloin to a rosy pink medium-done stage of 140 to 150 degrees. For maximum safety, you can freeze the meat for 24 hours, ensuring that any and all bacteria have been eliminated. Good pork nowadays is pasture fed, just as better cows are grass fed.

The French are probably the most adept at utilizing the entire pig (sausage, paté, charcuterie). In the north they cook it with cream, apples, prunes, and Calvados. Garlic, rosemary, and juniper berries are also favorite seasonings for chops, roasts and stews.

In Italy, it is cooked with fennel, garlic, and marjoram, and sometimes braised in milk. Cured pork products, such as prosciutto and salami, are also popular. In the American South, Smithfield hams gained a reputation as being the finest because the pigs ran around rummaging through peanut farms, giving them a unique taste.

Although pork is most popular in China, it is worth noting that most Chinese recipes call for small amounts of ground pork mixed with spices and vegetables such as fried green beans. A recipe like Sung Cho Bao contains only six ounces of pork for four people. The rest of the recipe is carrots, lettuce, scallions, mushrooms, celery, and spices.

In other words, moderation! You don’t need to gorge on a big huge two-inchthick, 16-ounce chop to enjoy “the other white meat.” There is a place in the omnivore’s diet for this economical, misunderstood food.

This is one of my favorite show-off-for-company-but-don’t-break-the-bank recipes. It is from a cooking school in Virginia. It is especially good served on a bed of slowly sautéed leeks. Serves six.

Season tenderloins with salt and pepper. Sauté over medium heat in skillet with oil to lightly color the outside. Place in preheated 350-degree oven for approximately 15 minutes with one-half cup of water in the skillet. Let rest 10 minutes.

In food processor, cream the Roquefort and butter together (or just mash with a fork). Remove tenderloin from the oven and keep in a warm place. Remove fat, if any, from skillet. Keep the juices. Add sherry and shallots to skillet and boil to thick consistency. Add stock and boil until it thickens (at least a two-thirds reduction).

When ready to serve, add the juices from tenderloin to skillet and swirl in the Roquefort paste bit by bit. This will form an emulsion. Add parsley. To serve, slice tenderloin about one-half-inch thick. Top with sauce.

This dish is adapted from Steven Raichlen’s recipe from The Washington Post many, many years ago. It is a great version of Thai street food. Serves four.

Heat a wok or frying pan over high heat. Swirl in oil and heat almost to smoking. Add garlic, chilies, and white part of scallion. Be careful of fumes, and don’t let the garlic burn.

Add pork and stir-fry for one minute. Add fish sauce, soy sauce, sugar, stock, and green part of scallions. Bring mixture to boil. Stir in basil and cook 20 seconds or until leaves are wilted and pork is cooked.

Serve with rice or noodles. It is supposed to be a little bit soupy.

This recipe is adapted from Fine Cooking magazine. Serves four to six.

Trim fat and sinew from pork. Cut into medallions about one-half-inch thick.

In small bowl, whisk together soy sauce, two tablespoons of rice vinegar, two tablespoons of brown sugar, the garlic, ginger, one-half tablespoon of sesame oil, and two teaspoons of chili sauce. Toss one-half cup of this mixture with the pork in large bowl. Let sit out for 25 minutes or up to two hours in a refrigerator.

In another large bowl, toss cabbage with carrot and half the scallions, one tablespoon canola oil, one teaspoon salt, and remaining rice vinegar, sugar, sesame oil, and chili sauce. Let sit 15 minutes, toss again, then transfer to serving platter.

Mashashimuet Park's History and Future
A Conference for Young People to Create Solutions
Get Outside, Get Moving
END_OF_DOCUMENT_TOKEN_TO_BE_REPLACED