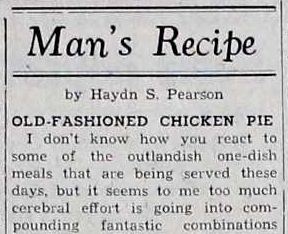 I don't know how you react to some of the outlandish one-dish meals that are being served these days, but it seems to me too much cerebral effort is going into compounding fantastic combinations that were never meant to amalgamate. A lady asked me the other day to define "old fashioned" chicken pie as contrasted with a "modern."

I can tell you the chief distinction without any difficulty. The "old fashioned" had plenty of chicken meat in it. Not long ago one of stores where we trade beat the drums and clanged the cymbals over a colossal sale "of the most delicious chicken pies ever made." My friends, that particular pie had just one good character trait: it looked good. Its innards were mostly gravy.

Cut up the meat from a five to six-pound boiled fowl. Take off the skin from the meat pieces. Cook the fowl in about one and a half quarts of water with one large onion, one bay leaf, one teaspoon salt, one-fourth teaspoon pepper. Put three-fourths of a cup of the water in which the vegetables are cooked into the quart and a half of water with the fowl.

First cook together three-fourths cup of diced potatoes, three-fourths cup diced carrots, and one-half cup peas. Make your gravy out of the stock left after boiling the fowl. Put the cut-up meat and vegetables into a casserole. Pour on the gravy. Make biscuits by your favorite recipe and place on top. Brush the biscuits with light cream. Bake at 425 until biscuits are done.

This is honest, old-fashioned chicken pie and is one of the most satisfying meals I eat.