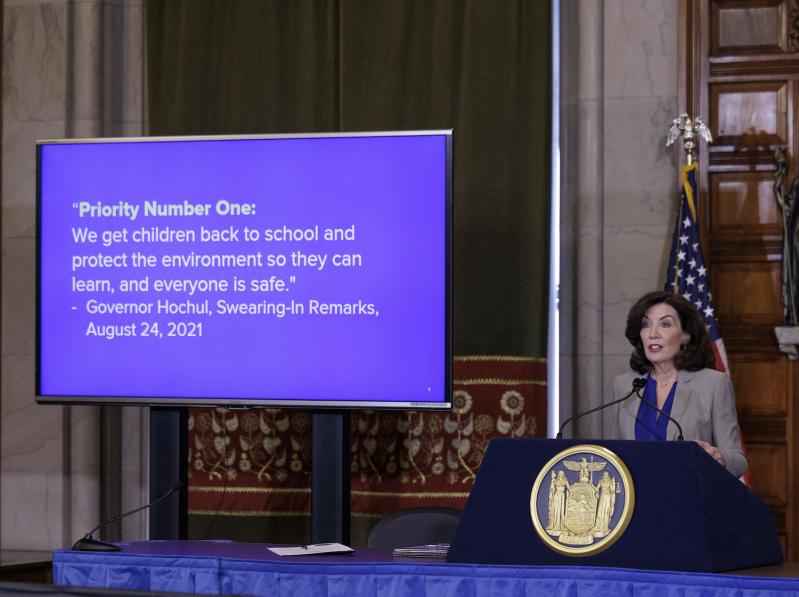 Gov. Kathy Hochul announced her plan to end the state's school mask mandate during a press briefing in Albany on Sunday.
Mike Groll/Office of Governor Kathy Hochul
By Judy D’Mello

Gov. Kathy Hochul announced Sunday that the New York State mask mandate for schools will be lifted as of Wednesday.

"My friends, the day has come," Ms. Hochul said during a press briefing, explaining that the decision was reached after a weekend of consultation with public health officials, teachers, school administrators, and PTA members. "We wanted to make sure we had the advice, the wisdom of all these different groups that have been directly affected by this decision."

However, the governor pointed out that local officials in individual districts and counties would continue to have the power to impose mask mandates and other restrictive measures based on their needs. As of yesterday, Suffolk County reported 101 new cases of the coronavirus, with 1.6 percent of tests coming back positive. The seven-day average of positive tests was down to 1.9 percent, a sharp downturn from the 8 percent seven-day average reported on Jan. 31.

Statewide, New York has seen a seven-day average positivity rate below 2 percent and hospitalizations under 2,000 for the first time since Nov. 14.

During Sunday's update, Ms. Hochul praised the state's efforts to combat the virus, but added that "we must continue to work together to fight this virus. These positive trends are a result of New Yorkers' hard work and dedication to protecting one another." She urged both parents and children to get vaccinated if they have not yet done so.

The governor has been under pressure to roll back the state's rules on masking in schools after nearby states, including Connecticut, New Jersey, and Delaware, announced plans to lift their mandates.

On the East End, the mask-wearing mandate in schools has caused ire among parents who have called for a "mask choice" policy, saying that masks have had negative social, emotional, and academic fallout on their children.

In the East Hampton School District, Adam Fine, the superintendent, said the mask mandate rollback would be discussed during Tuesday's school board meeting.

Mashashimuet Park's History and Future
A Conference for Young People to Create Solutions
Get Outside, Get Moving
END_OF_DOCUMENT_TOKEN_TO_BE_REPLACED