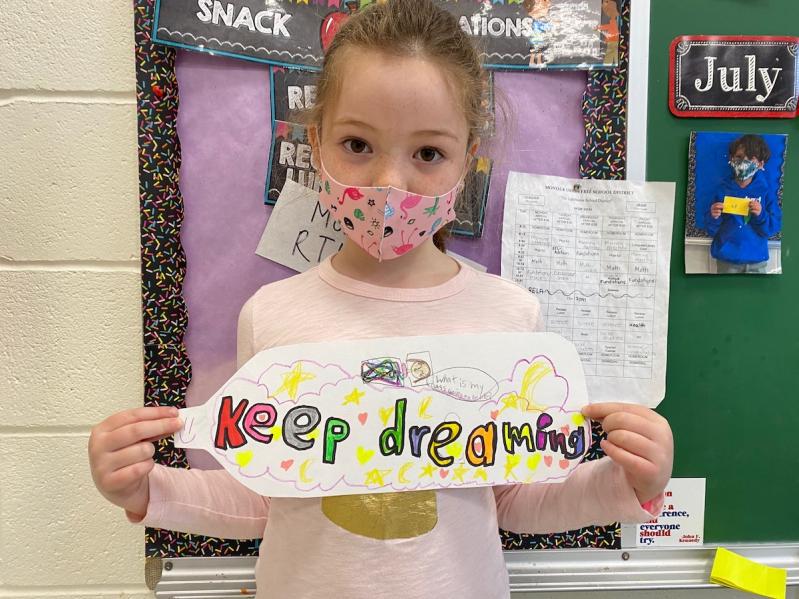 The East Hampton School District on Tuesday confirmed that for the first time since September, there are no active Covid-19 cases among students or staff. The Sag Harbor School District has been Covid-free for about a week, while the Amagansett School and Montauk School have been for several weeks.

Kaila Zeh-Gatti, an eighth grader at the Montauk School, says she has a much deeper appreciation of school and friends since returning full time in September. The school's band and chorus are making music as ensembles again, and a few days ago, Jack Perna, the Montauk superintendent, greeted a new acquaintance with a handshake for the first time in more than a year.

Almost all children in East Hampton, Sag Harbor, Springs, and Bridgehampton — previously districts that had many students on every-other-day in-person learning plans — are now back at their desks full time.

And the Sagaponack School has been the only South Fork school to be Covid-free since September. Its small size was either going to be a benefit or a detriment, and it was not immune to the challenges presented by the virus, but the school managed to be fully in person except for two remote days since September.

"We're in such a better place," said Adam Fine, the assistant superintendent of the East Hampton School District, summing up the progress since the beginning of the pandemic. "It's a testament to the schools, administration, the board of education, the students, and the community all working together."

East Hampton has had 197 cases of Covid among students and staff since September, according to the School Covid Report Card, a statewide database that tracks cases at schools. Springs has had 70 cases, Sag Harbor 45, Bridgehampton 33, Montauk 32, and Amagansett 10. Wainscott had just four cases and Sagaponack, again, had none.

"Our secret? We are small," said Alan Van Cott, Sagaponack's superintendent. "There is really no master plan other than we followed everything we wrote in our reopening plan. We were determined to open in-person from day one and that would be an everyday, full-day program. We had the barriers, we had social distancing, we washed our hands, we communicated with parents. . . . Districts around here have several hundred people, so there was a greater probability for those folks to be impacted."

The Sag Harbor and Amagansett districts had announced two-week closures even before Gov. Andrew M. Cuomo made it official on March 13, 2020. Seth Turner, the Amagansett superintendent, said there was anxiety ahead of the return of students and teachers in September.

"The school community needed to know how to come back to school safely," Mr. Turner, who recently reinstated field trips on a limited basis, said this week. "It was really important that at the end of August we held some workshops for parents, professional development for teachers, and we had a day of introduction when all the parents met outside, and we went over what the expectations were going to be. . . . We had to take baby steps, getting though the first day of school, then the first week, the first month."

On May 1, 2020, following multiple extensions of the initial two-week closure, Governor Cuomo announced schools would remain closed for the rest of the academic year. Now, districts here are planning for in-person graduation and moving-up ceremonies as Covid restrictions are slowly relaxed.

"Early on in the pandemic there were a lot of unknowns about how things were going to transpire moving forward," said Jeff Nichols, the superintendent of the Sag Harbor School District. "We certainly know now more than we knew then, but I remain concerned about the safety of our school community. I think the situation has improved dramatically with the rollout of the vaccines, and I'm really thankful for that."

New York State will now allow children as young as 12 years old to receive the Pfizer vaccine. The federal Food and Drug Administration deemed it safe for that age group this week, and its emergency use authorization from the Centers for Disease Control in New York State came late Wednesday.

"I will get the vaccine when I'm eligible for it," said Kaila, who happens to be president of the Montauk Student Council. "I'm not really worried because it's been tested on a lot of people and the results have been good. Anything to get back to normal, I'll do. I don't want to have to wear a mask and be six feet away from people for much longer."

Assuming the state does approve the Pfizer vaccine for this age group, local school health officials are planning a pediatric vaccine clinic on May 22 at the East Hampton Center for Humanities, formerly the Child Development Center of the Hamptons school, on Stephen Hand's Path. The preregistration form for South Fork children can be found online at bit.ly/3eHibs4.

"Nothing has been finalized yet, but everyone in health care knows that by vaccinating kids, this is the last piece in the puzzle to get back to some normalcy," said Wendy Geehreng, an East Hampton school nurse who oversees Covid-19 logistics.

Administrators already knew that in-person learning was critical for children, but now, "people understand better how important it is to be physically in school not only for academics, but the social and emotional component is huge," Mr. Fine said. "There's more of a value for kids. . . . We took it for granted, and now we don't."

The return of school sports in March and school theater productions in April and May were big steps forward. "Those kinds of things are beneficial in many ways," Mr. Nichols said.

And all the while, the students were still growing and maturing, as they do.

"Their faces have changed. Their baby teeth are falling out!" said Karen Theiss, the Montauk School nurse. "Little things that were very normal to see — it's almost a surprise to see them now." A happy pandemic accident, she said, was that because the children were masked, there were almost no cases of the flu or strep throat in the school. No lice, either, since everyone was socially distanced.

"You learn to appreciate the little things," Ms. Theiss said. "You learn to be grateful, you learn patience, you learn a sense of family and community on a much better level."

There are still challenges ahead, particularly when it comes to what school will look like this coming September.

"Will it be back to normal? Will we still need to distance?" said Maria Dorr, principal of the Amagansett School. "It's a wait-and-see kind of game."