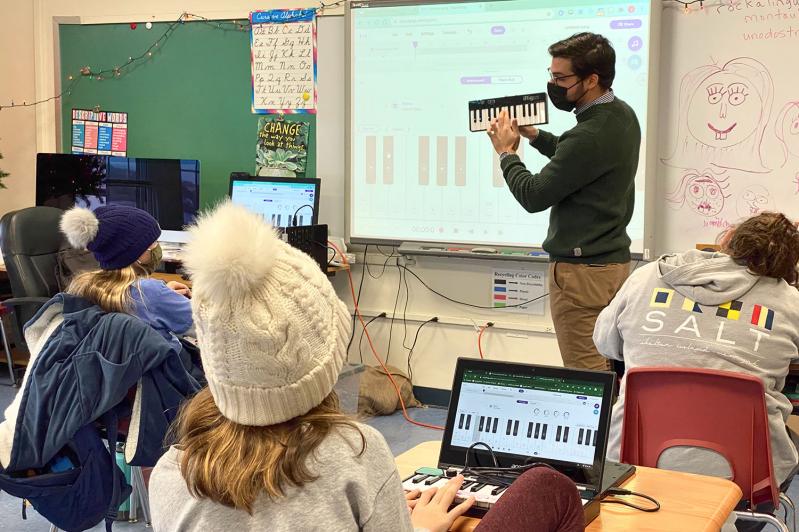 Jake Lorefice, a music teacher at the Montauk School, got his students started on podcasting with this prompt: "Explain something that kids understand but adults don't."
Tyler VanSlyke
By Bella Lewis

Compared to most people, Jake Lorefice was one New York University music technology master's degree more prepared to roll with the pandemic's punches and modify the Montauk School's music program, setting his sixth graders up for podcasting success.

The 25-year-old from East Moriches had begun his master's at N.Y.U. three years ago, the same year he took up his kindergarten-to-eighth-grade vocal music position at Montauk. As he looked ahead to graduate from N.Y.U. in the next few days, Mr. Lorefice considered the "serendipitous" overlap in which he found himself conducting students remotely in the spring, and in the fall applying his music technology knowledge to Covid-safe study.

"A lot of what the administration thought was that you can lead your rehearsal remote, but everyone soon realized there's a pretty serious lag time, so making music in real time -- which is what is required of making music -- is pretty impossible."

His thesis, which he was filming later that day, studied how music education actually went during distance learning, drawing from the successes and not-so-successes of teachers in areas like Springs, Westhampton Beach, and Nassau County.

He found most teachers had luck with supplemental material like history and theory, but as far as the music went, "the conclusion of the study is kind of crummy. It's really not possible. The whole concept of making music might have to change."

Too dependent on interpersonal connection, actual music would need to be individually recorded and then stitched together by the conductor, something that is labor intensive for everyone involved. The challenge exposed a need for developing some kind of software to do it automatically, he said.

When the Montauk School resumed in-person study in the fall, his problems were not exactly solved. "Now the kids have to be in their own classrooms and really don't leave because of the cohort concept." Sharing instruments, switching drums, or a chorus with "75 kids in a room speaking and spitting everywhere" were obviously a Covid nightmare.

Students' Chromebooks came to the rescue with "really wonderful software" that Mr. Lorefice was familiar with thanks to his degree. After doing a piano lab with mini desktop keyboards that plugged into the Chromebooks, he turned his sixth graders' attention to podcasting, which required only a microphone plug-in.

What his students came up with was "next level, you would never expect it," he said. He was wowed by how his students wielded their autonomy. "I just gave them the prompt and let them go. Explain something that kids understand, but adults don't."

He wanted them to create their own mode of explanation using the podcasting medium, and so limited his advising to a template of "three major chunks of speaking: intro, body, and outro. And between all of those you have to do transition music."

Carli Stuckart, a sixth grader, commented, "I think the podcasts were a great way for us to express ourselves and our hobbies."

After listening to popular podcasts with ears trained on musical choices, Mr. Lorefice said, his students took original stabs at their own soundtracks and scripts. The two-to-three-minute-long podcasts run the gamut from lively chatter about why school should start later, why siblings are annoying, why kids talk in class, and why you can't pause an online video game, perhaps brought to light by quarantined kids being called to dinner by parents, Mr. Lorefice reckoned.

In answer to whether TikTok made an appearance on any set lists, Mr. Lorefice said without missing a beat, "Oh my God, there were like a million TikToks." He cited a few podcasts about Charli D'Amelio, a TikTok star, and a particularly interesting one about how parents lack the understanding that their kids cannot simply play with another kid on account of the fact that they are both kids.

The unit finished in October, a month earlier than Mr. Lorefice had anticipated. With such fine work, he had nothing to add.

Drawing on his music technology background for music class at the Montauk School was a "big departure" from the usual "recorder-based" music program. Mr. Lorefice, who attended the Fredonia School of Music as an undergraduate, and Montauk's just-turned-30 band director make up the school's young music and drama program, the latter of which Mr. Lorefice also would normally direct in non-Covid times.

Regarding the possibilities of a music program, Mr. Lorefice spoke to the tradition of the recorder and why in the world middle schoolers must learn to play it at all: "It's funny that you say that because you don't." At his old teaching job at Harborfields in Greenlawn, "I was forced to teach the recorder. I said to myself, 'I'll never be a recorder teacher. This sucks.' The first question I asked to my superintendent, Mr. Perna, was, 'Can we do ukulele rather than recorder?' "

Not only can students sing and play at the same time, he said, but the ukulele is a stepping stone to learning guitar chords. Instead of $400 every year on new recorders, the school could spend $600 on ukuleles that last for 10 years -- which was done in 2018 -- and by 2028 music class might look completely different all over again.

Petition to Speed Up Sand Replenishment in Montauk
Artistic Portraits of M.L.K. Up for Auction on Saturday
Wine Tasting for Lions Club
END_OF_DOCUMENT_TOKEN_TO_BE_REPLACED