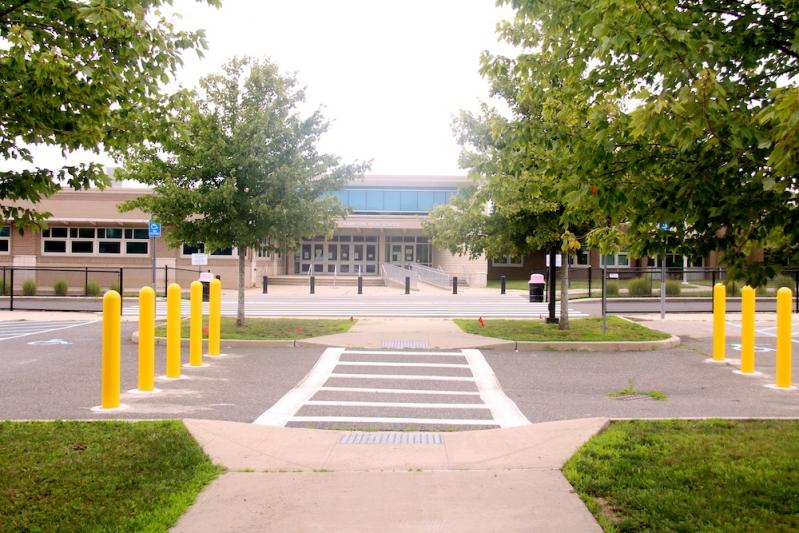 East Hampton High School will open with 966 students, most on the hybrid system.
Durell Godfrey
By Christine Sampson

The countdown is on to the first day of school on the East End, but challenges are plenty in local districts.

School officials have said Chromebook laptops for students are on back order across the nation and Plexiglas barriers for desks have been hard to come by. Local school boards have appointed many previous substitute teachers to full-time positions, creating a shortage of those who can be called upon to fill in for teachers who take time off. Custodians, too, are in short supply for some districts as schools embark on plans that rely upon stringent cleaning protocols.

"We're in a good place. The only sticky wicket for us . . . [is] the Plexiglas barriers for my building in particular," Dr. Soriano said. "Safety sort of rests on these three legs of six-foot distancing, Plexiglas barriers, and masks. Our facilities folks said that these barriers could likely not be here. . . . We're hoping for the best but if the barriers don't come in, we need to continue meeting virtually until they do."

Richard Burns, the superintendent, said East Hampton is willing to pay the cost of direct air-freight shipping to get the barriers in sooner than Sept. 9 -- the day before school starts -- which is their projected arrival date.

"We're going to do everything in our power to get them here," Mr. Burns said during Tuesday's board meeting. "I think every school district in America is trying for the same limited pool."

James Crenshaw, the high school principal, said the final details are slowly coming together. "I feel very confident we'll be ready to go," he said.

Beth Doyle, the John Marshall principal, told the school board, "We will be ready. We're not there yet, but we are definitely in a much better place than we were a week ago."

In Springs, thousands of dollars of Chromebooks are on back order. "We're waiting on them with baited breath. Second week in September, maybe. This is a national problem," said Debra Winter, the Springs superintendent, during Monday's Springs School Board meeting.

Also this week, the Springs School District released an air quality report from Enviroscience, an environmental engineering consulting group. Enviroscience tested all areas except several front-of-building rooms that are under construction. It listed 14 items as "areas of concern that should be corrected." Among those areas were two rooms, 25 and 68, that have air-conditioners but "no other mechanical or natural ventilation." Five rooms, 7, 22, 65, 78, and 79, have air ventilation capabilities that limit their capacity to 15 people. Room 21 had ventilation that was partially obscured by "excessive plant growth in the courtyard which should be removed." One vent, in the classroom behind the stage, was not functional.

On Monday, Ms. Winter acknowledged that two rooms, previously used for science, engineering, technology, and math activities, would not be used because of ventilation issues. "Most of the classrooms . . . meet or exceed" air quality standards, Ms. Winter said.

The Montauk School is also awaiting Chromebooks and Plexiglas barriers, but otherwise, "We are in good shape," said Jack Perna, the district superintendent. He has been reminding parents that they need to take their children's temperatures before school every morning before they leave the house.

The East Hampton School District announced this week it will be hosting a drive-through Covid-19 testing site at the high school campus. It will be open on Tuesdays and Thursdays, starting today, from 8 a.m. to 4 p.m., and can be accessed by the general public as well as students and school staff members by appointment.

"Our school board here was very welcoming, not without question, but [we are] able to be a place so people in East Hampton Town have a resource for a testing site," said Adam Fine, East Hampton's assistant superintendent. "If we need to get students tested, if we need to get staff tested they've already developed a system for that. . . . We have a few nuances to work out but [Stony Brook Southampton] Hospital is committed to keeping this site on East Hampton property as long as East Hampton allows it to be here."

Jackie Lowey, an East Hampton school board member, asked whether the district could mandate that all students and staff have a Covid-19 test before the start of school, but the school attorney's answer was "no."