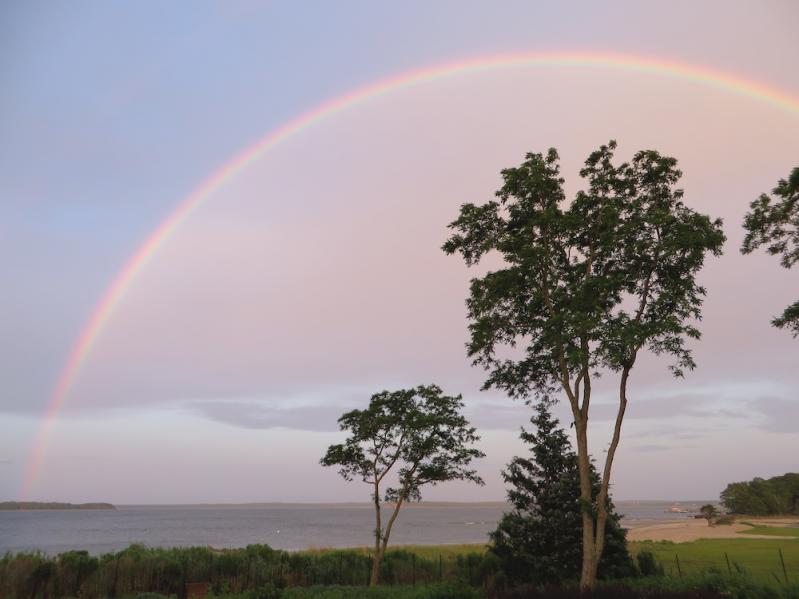 The local artist Scott Bluedorn recently launched an interesting little website, East End Futures (eastendfutures.info), where we can all share ideas for a safer, happier, more sustainable future. Of all the wish-list items for an imagined, better future here one stands pre-eminent.

Be nice. Smile. Say hello. More of all that.

Don’t we want this to be a happy place? A friendly place? And isn’t how we feel often self-created? Friendliness is intentional, driven partly by the idea that our own friendliness might brighten the community around us. So, let’s be a friendly East End, consciously, deliberately.

The question is why don’t people start with being friendly? I’ve asked myself that ever since I became aware of the existence of unfriendliness. I can’t recall the exact moment but it was probably in elementary school when an older kid, with just enough additional life experience to know the power of being mean, was, well, mean to me. Maybe he told me to shut up or he stole my marbles, or maybe he just did what I often experience as an adult: flashed a scowl when I greeted him with a smile. Whatever it was that he did, it felt awful. It took me years to realize that such encounters were actually not my problem, and after that I resolved to always try to lead with a smile and a “Hi!” no matter what.

Because there’s never enough friendliness. If one were to measure its prevalence in communities around the world I suspect the East End would be somewhere in the middle on the scorecard, or probably even lower. There are distinctly friendly places, the South being one of them, and islands in the Indian Ocean and South Pacific being others.

Yet it is hard to do. I can’t draw a picture of what a friendlier East End might look like, as you can with solar panels over parking lots, another East End Futures idea. But I can picture it in my mind and describe how it feels.

Building a culture of welcoming and friendliness would take time and effort. It would come from municipal leaders, municipal signage, and messaging to business organizations and social, arts, and cultural institutions. It could be instilled almost as a social and local cultural norm. The South didn’t become friendly because Southerners have some sort of friendly gene. They’re friendly because being friendly is cultural, and contagious. Once it catches on, it takes off: Nods to strangers in the grocery store, more smiling, more waving. All of that eventually translates to more sharing, more politeness, more respect. All good things.

Imagine beach signs, for example, that began with “Welcome to the most beautiful beaches in the world, enjoy them!” and then proceeded to explain the rules and the fines required to keep them that way.

Imagine if leaders across the East End decided on a simple friendliness edict and declared to all employees and colleagues: First, always be friendly. Imagine the constructive conversations that would start in workplaces: “Friendly, why?” “I don’t feel like being friendly!” “What does friendly mean and look like?” “To what end?” All good things.

When I oversaw 16 employees, friendliness was a company marching order, along with empowering employees to try to solve every problem that comes up themselves, even if it ended up costing the company. In other words, build loyalty with friendliness and relationships. It worked.

Local anger and fear is understandable. New York City is a virus hotspot, and visiting city dwellers are more likely disease carriers than locals are. The tension worsens when those very visitors appear blasé about masks and distancing. The result is that year-rounders have turned on visitors with glares, even insults. Social media is full of indignant rage at people flouting the mask and distancing rules.

The tension is at its worst in Montauk, which has been besieged by tourists at a time when we’ve been instructed to stay home. Among the nasty local hashtags on social media, #staythefuckhome has been making the rounds.

The antidote to all this is the feeling that we are all in this together, no matter who you are or where you come from, something that’s very hard to do for some of us. Resentment of unfamiliar faces is almost cultural among certain groups out here and, in fact, that shared and mutual resentment is often a defining characteristic of belonging here.

But there is another way. Smile, say hello, then say, “Do you mind putting on a mask because you might be killing me?”

Biddle Duke is the founding editor of The Star’s East magazine.