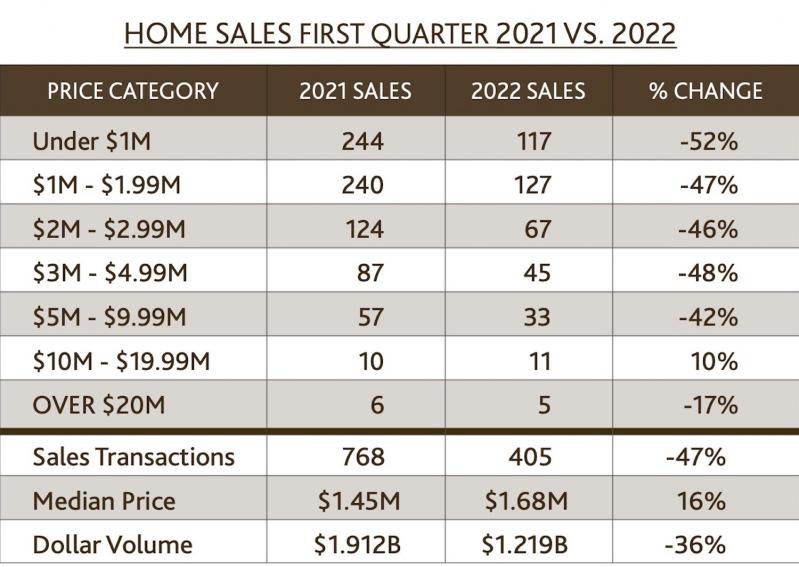 The East End real estate boom brought on by the Covid-19 pandemic is experiencing a shift thanks to historically low inventory, but the market is still feeding historically high prices, competitive conditions, a near-total lack of available rental properties, and faster turnaround of deals as a result.

According to a report released in April by the Douglas Elliman company, sales volume is down year-over-year in every price category of single-family houses — most notably the under-$1 million category, which declined by 50 percent. The average drop, when taking into account transactions in excess of $20 million, was about 16 percent.

"There's nothing to sell. There are buyers out there waiting on the sidelines, waiting to hit the market. A lot of what's left is homes that need renovation, and a lot of buyers would rather not have to deal with that," said Justin Agnello of Elliman's Atlantic Team, which also includes James Kehoe and Hara Kang.

Jackie Lowey, a broker with Saunders, said the result is "an aggressive, competitive seller's market. In this kind of market, it's essential to be prepared to make an offer — often above ask — with no contingencies. Working with an agent who knows the market and the inventory is really the only way to be successful in this kind of market." Contingencies take some of the risk off the buyer, who might have, say, a mortgage contingency that makes the deal dependent on the buyer's obtaining a mortgage.

Mr. Agnello and Ms. Lowey projected that in about six months' time, there are likely to be quite a few more single-family homes coming onto the market, which will benefit buyers amid what is now a seller's market. Ms. Lowey said that "for the first time in a while" — the last five to six weeks — we have "seen more inventory coming on than deals going into contract. That's healthy, and a welcome sign."

"There is a general feeling that some of those who bought during Covid to escape the city — or bought as rental investments which have slowed — may choose to take advantage of the strong sales market and list their homes in the next six months," she said. "Basic economics dictates that more inventory will gradually shift the balance back to the buyers. I don't think it will happen overnight, but I do believe that the market will level off."

Because much of local real estate is driven by second-home ownership, the current seller's market is somewhat inflation-proof and immune to rising interest rates on borrowing. "Sadly, those that it affects the most are first-time homebuyers and the local, working families and their kids who have largely already been priced out of this market," Ms. Lowey said.

Robert Nelson, the executive managing director of Brown Harris Stevens of the Hamptons, said the market here continues to be "cash-based" rather than mortgage-driven.

"There's plenty of plain old cash purchases — younger buyers that have taken their profits off of cryptocurrency and bought real estate, and buyers who have profited from Wall Street and want to take some money off the table there and put it into real estate," Mr. Nelson said.

Mr. Agnello said he has not "done a mortgage deal in a long time. If it is done, it's done with a private lender or bank and it's a small amount, not the full amount" of the sales price.

Mr. Nelson added that "locals wanting to stay local" are priced out of home ownership right now as "the unfortunate consequence of a premier and luxury market."

He also urged sellers to price their properties fairly. "Don't overdo it, because if you do, you will not sell," Mr. Nelson said. "People will see that. For buyers, I recommend just being 100 percent ready to commit. Do not look into a house if you're shopping. Don't waste your time — the houses that you see today will probably be gone in two weeks."

Tied to the market is revenue for the Peconic Bay Community Preservation Fund, which provides the five East End towns with money from a 2-percent real estate transfer tax to be used for land preservation, historic easements, water quality improvements, and recreational spaces. In a report released on May 9, Assemblyman Fred W. Thiele Jr. announced that in the first quarter of 2022, the C.P.F. took in $56.1 million, which is "the largest first quarter in the 24-year history of the C.P.F. program."

East Hampton revenues totaled $18.75 million from January to March this year, up 7 percent from the same time period in 2021. Riverhead — considered to be the town with the most "affordable" real estate prices — experienced the biggest boom of the five towns, with a 32.4-percent increase in preservation money. Revenue went from $1.82 million in 2021 up to $2.41 million in 2022, indicating an overall uptick in the market.

"We live in an amazingly beautiful and desirable place," Ms. Lowey said. "The pace of the market will always ebb and flow, but the Hamptons will always be a solid investment. People want to be here! I came here 22 years ago and never left! We've had a historic, two-year bull market in the Hamptons, which is not sustainable at these record numbers. I think we will see a gradual cooling off and a return to a more traditionally paced sales market with more balance between buyers and sellers."