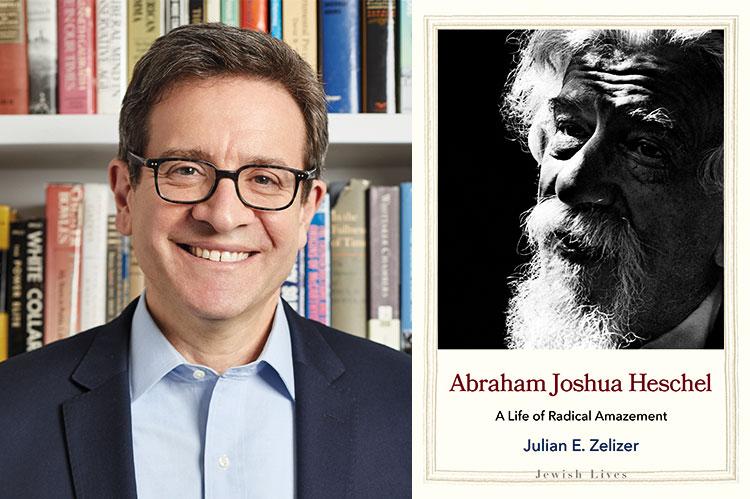 "The meaning of life is to build life as if it were a work of art." This sentence summarizes the message of Julian Zelizer's new book, "Abraham Joshua Heschel," which is addressed as much to religious Jewish readers as to secularists and tells of a deeply committed religious scholar who dedicated his life to human justice in the widest sense.

For Heschel, "the supreme issue today is the premise underlying [religion], namely, whether there is a pathos, a divine reality concerned with the destiny of man which mysteriously impinges upon history."

Heschel started his life in a Polish Hasidic community in 1907, began religious studies in Warsaw, and entered the University of Berlin to study philosophy at age 20. In 1939, the Nazis invaded Poland and killed several members of his family. He emigrated to the United States via London in 1940. Over these early years, Heschel's thinking evolved, exploring a hybrid of sacred and secular humanism.

Much of this book will be of special interest to Jewish readers, as it delves deeply into the history of Jewish thought in America. Being a historian, but not Jewish, this reviewer is not qualified to comment on the religious aspects of the work, but the book is equally of interest to non-Jewish readers who care about the more general theme of man's inhumanity to man.

In fact, his determination "to tackle the existential dilemmas that faced humankind following all of the catastrophic experiences that had occurred in the twentieth century" led him to write presciently in "Man Is Not Alone: A Philosophy of Religion," from 1951:

"Horrified by the discovery of man's power to bring about the annihilation of organic life on this planet, we are today beginning to comprehend that the sense of the sacred is as vital to us as the light of the sun; that the enjoyment of beauty, possessions and safety in civilized society depends upon man's sense for the sacredness of life, upon his reverence for this spark of light in the darkness of selfishness; that once we permit this spark to be quenched, the darkness falls upon us like thunder."

He believed that neutrality in the face of evil is unacceptable and wrote in his book "The Prophets" (1962): "Indifference to evil is more insidious than evil itself; it is more universal, more contagious, more dangerous."

This highly influential work was taken up by civil rights leaders of the time, including Martin Luther King Jr. and Andrew Young, and in 1963 led Heschel into direct contact with them. He "criticized Americans who were not guilty of racist acts but who sat silently in the face of oppression," Mr. Zelizer writes. "Racism is Satanism, unmitigated evil," Heschel said.

King invited Heschel (who had become his friend) to march with him from Selma to Montgomery, Ala., on March 21, 1965. This was the second Selma march, the first having ended in catastrophe on March 7. He walked next to King in the front row. John Lewis recalled in his account, "Walking With the Wind," that an onlooker had called out, on seeing Heschel, who looked like the creator on the Sistine ceiling, "There goes God!" Three years later, he would march in King's funeral procession.

Closer to home, Abraham Heschel also fought against anti-Semitism, and among his major efforts in this regard was an intense quest to get the Catholic Church to rescind its dogma on deicide — the accusation that Jews had killed Christ. This led him to extended negotiations with the papacy. Finally, in 1965, the church called for "mutual respect and understanding" between Catholics and Jews, adding that the crucifixion of Christ "cannot be charged against all the Jews without distinction, then alive [!] nor against the Jews of today."

He also opposed and spoke out strongly along with clergy of other denominations against the war in Vietnam. He sat next to M.L.K. as he declared the war immoral in 1967. "The blood we shed in Vietnam makes a mockery of all our proclamations," Heschel said, adding, "In a free society, some are guilty and all are responsible."

But Heschel was not a pacifist. He supported Israel in the Six Day War. In this context, he was strongly criticized by some people. He then released a statement asking, "Terror and dread fell upon Jews everywhere. Will God permit our people to perish?" Not all his allies in the civil rights movement accepted Heschel's stand on Israeli militance.

Heschel died of a heart attack in December of 1972 and was widely mourned and eulogized. Sadly, the author of this biography closes on a pessimistic note. "Just as Heschel passed," he says, "so too did the world where progressive piety had come to gain a serious foothold in American political culture. Heschel gradually seemed like a relic from a bygone era."

Critic's note: This is a complex and dense work, with extensive and informative footnotes.

Julian E. Zelizer is a professor of history and public policy at Princeton. He has a house in Sag Harbor.