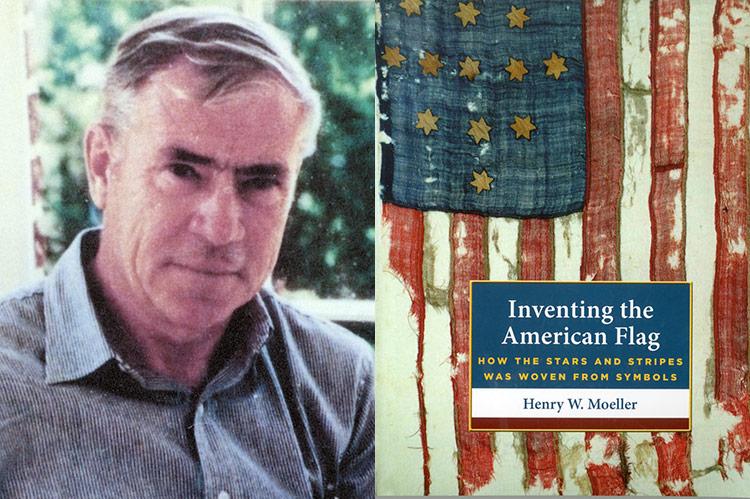 “Inventing the American Flag” is a perfect gift book, beautifully produced and illustrated, and full of information about our national flag and related matters like symbols, myths, motifs, and heraldry. It is not about Betsy Ross, who is dispatched to children’s storyland right from the start, and a lot about Francis Hopkinson, who gets much of — but not all — the credit for designing our beloved Stars and Stripes.

Hopkinson submitted an invoice to Congress in 1780 for his services designing the American flag, but he was not paid because he was not acknowledged as the sole designer. The congressional resolution of June 14, 1777, ordered “that the flag of the United States be made of thirteen stripes, alternate red and white; that the union be thirteen stars, white in a blue field, representing a new constellation.” According to this book’s author, Henry W. Moeller, John Adams, Benjamin Franklin, George Washington, and Benjamin West may have had a hand in it too.

And where did these sages get their ideas from? That is Mr. Moeller’s subject. The sources, he writes, are Christianity, Classical Greece and Rome, foundation myths, and European heraldry, all of which were fundamental to the founders’ culture and education. The motifs of the Stars and Stripes are examined for their meanings and associations.

The story of the stripes seems simplest to explain. “We do know . . . that red and white striped flags were in use before [for sure in the 17th century], during, and after the American Revolution.” They represent triumph and seem to have been taken up by Europeans during the Crusades and commonly used in their flags and banners thereafter.

Since the original congressional resolution focused first on the 13 stripes, we may conclude that they stand for each of the individual states, whereas the constellation of stars represents their union.

There is much in this book about the origins and meanings of stars apart from their specific use in our flag. From Christian roots we are told that the sun, the moon, and the stars are referred to in the Bible’s Book of Revelation and spoken of in sermons of the time.

Importantly, the stars, positioned against the deep blue of the firmament, are laden with meanings. According to the author, they are related to the 12 signs of the zodiac, encoder of destiny. The founders thought of these stars in the heavens as a new constellation in the universe of nations.

In some early versions of the Stars and Stripes, there is a circle of 12 stars with a single one in the center, the sun and the zodiac totaling 13. Another source of the circle of stars is attributed to Rome — the founders’ model for the new republic. This connection is suggested by the ship ensign in a French painting of the “Aeneas Landing at Pallanteum” — Aeneas being, of course, the mythical founder of Rome — by Claude Lorrain (1677), which is specifically documented to have been known to Hopkinson.

The sun stands for the eye of providence (see the dollar bill) and plays an important part in Masonic symbolism. Freemasonry in the 17th and 18th centuries was a vehicle for the spread of liberal ideas in Western Europe and America. Washington and Franklin were members, as were a number of the signatories of the Declaration of Independence and the U.S. Constitution. The Marquis de Lafayette also belonged and was probably motivated by his membership to join in the American fight for liberty.

The moon also has many meanings in iconography. Perhaps in this context it would suggest truth and purity, but it plays no explicit role in the American flag.

In addition to the flag, Mr. Moeller examines the iconography of the Great Seal of the United States. On June 20, 1782, Charles Thompson, secretary of the Continental Congress, submitted a design to Congress for a coat of arms to represent the United States of America, and it was adopted that very day. An eagle holding in its right talon an olive branch signifying peace looks to its right. In its left talon it holds a bundle of arrows. “The olive branch and arrows denote the power of peace and war that is vested in Congress.”

Over the eagle’s head is a radiant disc filled with 13 stars known as “the grand luminary.” On its breast is a shield with 13 stripes topped by a blue band.

All this information, it must be noted, is supported throughout by splendid illustrations in the book, reproducing period paintings and artifacts. This includes the picture of a Native American woman wearing a feather headdress with a red and blue striped banner and a star-spangled shield from 1778. Interestingly, she then represented America.

So, we learn here of the many threads of meaning woven into our national symbols, both the flag and the Great Seal of the United States. They became official in 1783 at the signing of the articles of peace.